10/15/2014: Thought I’d repost this email showing that it was current Interim GC Doug Park who sat on the public records requests which eventually led to the firing of Melinda Grier. Park seems to be at it again, with the help of Dave Hubin. The PR Office is using fees, delays, and redactions with abandon.

I’ve never met him. But Ron Bellamy is the RG sports reporter who made me realize that what this country needs is political reporters who care as much about politics as sports reporters care about sports. His retirement announcement is here. 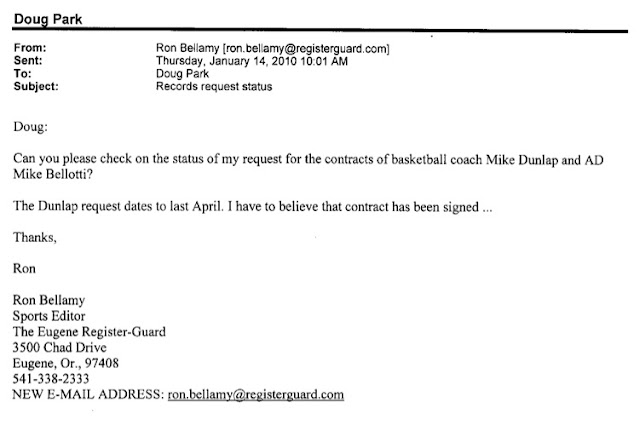 Richard Lariviere fired her. UO has been better ever since. Bellotti took his millions and split. UO’s new AD Ron Mullens is not going to repeat Mike Belotti’s mistakes – he’s on to a whole set of new ones. Dave Frohnmayer is no longer collecting a UO paycheck. Meanwhile Doug Park is still in the GC’s office, and his new boss is Randy Geller – Melinda Grier’s old assistant. Plenty of interesting stories left for Mr. Bellamy’s successors.