The UO administration spends millions on promoting student and faculty diversity. But will it follow the law when it comes to hiring Johnson Hall administrators? UO’s new Auditor is going to look into it:

Thank you for the email yesterday. I will review this case and determine if a request to waive a search was appropriately approved for this position. If you have any questions about the fraud and ethics reporting process, please don’t hesitate to contact my office at 541-346-6541.

Title VII is the section of the 1964 Civil Rights Act involving hiring, generally known as “affirmative action”. UO’s affirmative action policies require basic good hiring practices such as an open search and public job announcement, or an explanation for the exception. I’m no detective, but I think this evidence that UO violated its policies in hiring its new Assistant VP for University Initiatives and Collaboration is called “the dog that didn’t bark”:

The University does not possess records responsive to your request made 10/06/2014 for “documents related to the job search for the new UO Assistant VP for University Initiatives and Collaborations… [s]pecifically I am requesting any documents showing exemptions or exceptions to the UO job search procedures”. [The full request is below].

Presumably Ms Thornton and Dave Hubin have already brought this potential non-compliance with state and federal affirmative action law to the attention of Interim General Counsel Doug Park, for swift investigation and appropriate remedial efforts. But just in case, I have cced Park on the notification – at the risk of another set of retaliatory emails from him, accusing me of harassment.

“Around the 0” has the latest window dressing, here: 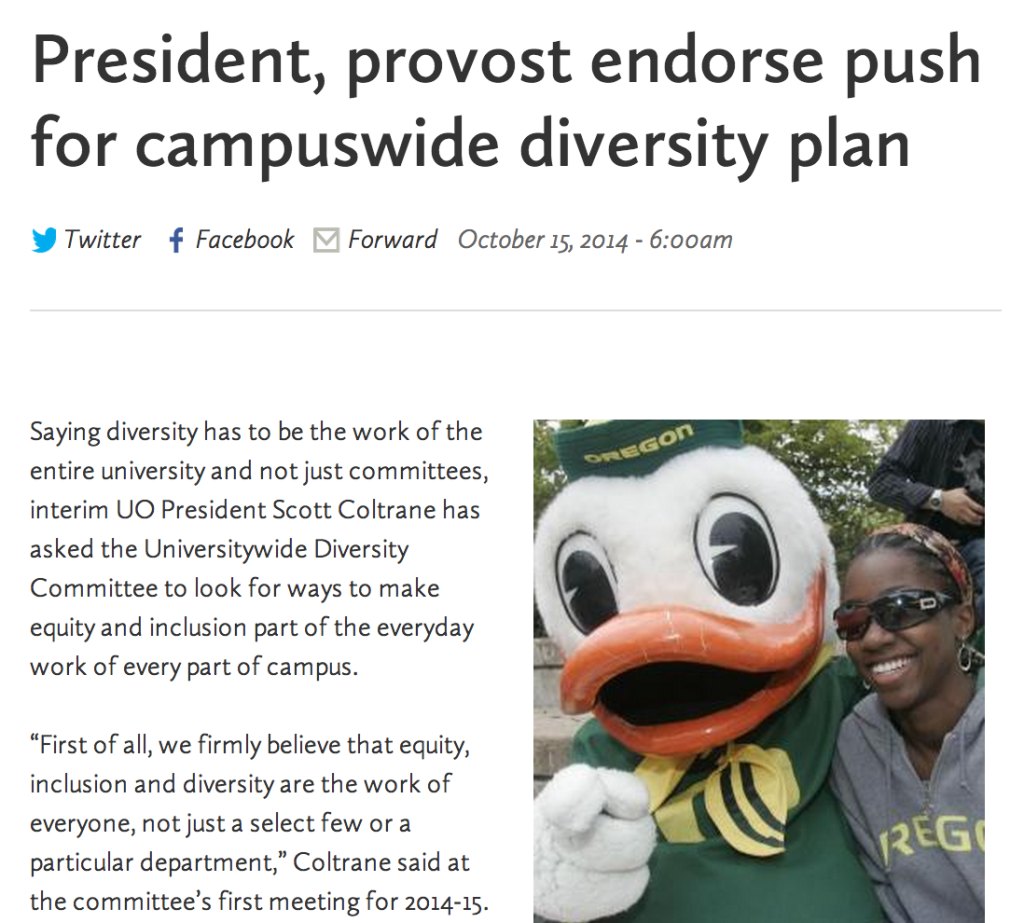 Sounds great. So, did they do an affirmative action compliant search for their latest Assistant VP hire? Doesn’t seem likely:

It’s been more than a week since I made this PR request. I would appreciate it if you could let me know when you expect to be able to provide the documents.

This is a public records request for documents related to the job search for the new UO Assistant VP for University Initiatives and Collaborations, announced here: http://around.uoregon.edu/content/uo-gains-statewide-education-system-expertise-latest-hire

I believe that this search and hire may have violated UO policies and procedures, and Oregon and Federal affirmative action hiring laws, and therefore I ask for a fee waiver on the basis of public interest.

Chuck Triplett was the OUS functionary who helped set up the sham Lariviere firing meeting in Portland. Now he’s an Assistant VP at UO, working for Johnson Hall’s secretive ELT, and also updating all the OUS “Oregon Administrative Rules” to make them work for UO – sort of a “trust me, I’ve done this right” position.

It’s nearly two months since I made the PR request for docs that will show if UO held an Affirmative Action compliant search for the job opening.

No response from PR Officer Lisa Thornton, so I’ve sent a followup, ccing Interim GC Doug Park, who I’m sure will be pleased to be kept in the loop on UO’s continued lack of compliance with Oregon DOJ recommendations for a one week turn-around time:

I made this PR request nearly 2 months ago. I have not received any response. Your website also does not have any information on the status of this request: http://publicrecords.uoregon.edu/content/job-search-documents

As you know the Oregon DOJ suggests that one week is normally sufficient time to provide documents. This seems like a simple request, and I would appreciate it if you would let me know when you expect to provide these public records.

This is a public records request for documents related to the job search for the new UO Assistant VP for University Initiatives and Collaborations, announced here: http://around.uoregon.edu/content/uo-gains-statewide-education-system-expertise-latest-hire

Specifically I am requesting a copy of the job announcement and the cover letters and resumes for the finalists.

8/4/2014: Triplett was Matt Donegan’s OUS Board Secretary during the Lariviere firing, and with Pernsteiner helped set up the secret firing and the sham public meeting in Portland:

He currently plays a key role in stonewalling the release of OUS public records, e.g. on Treetops and Gottfredson’s performance review. He’ll be UO’s Assistant VP of Collaboration. You can’t make this stuff up. Coltrane’s Org Chart is getting pretty bloated: 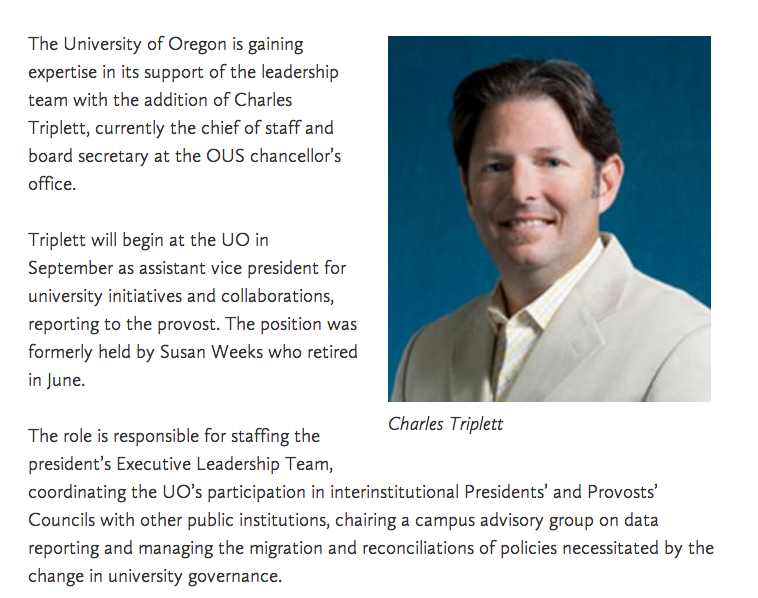 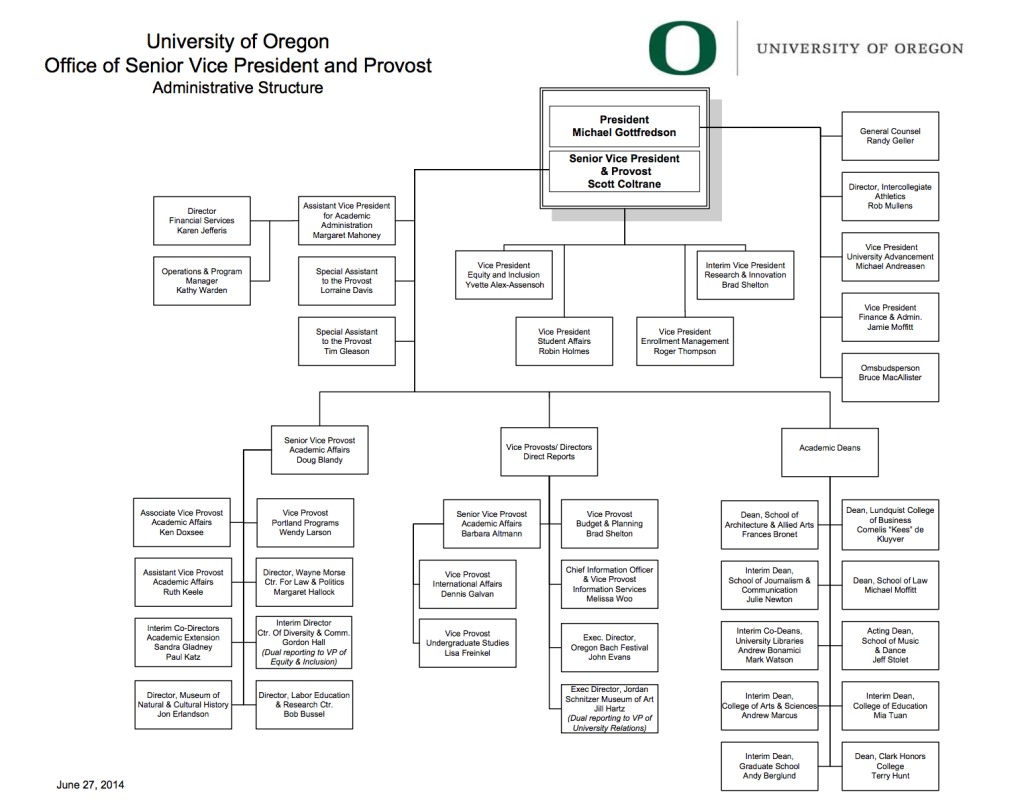 Susan Weeks used to work for OUS as one of Pernsteiner’s vice chancellors. She retired in 2010 with a 106K PERS pension, and then Bob Berdahl hired her at UO, at an 0.5 FTE at $173K or $62.5 per year. Gottfredson recently increased that to 0.75 time at $177K. As Ted Sickinger explains in the Oregonian, PERS has rules to limit this sort of double dipping, but it seems that Lorraine Davis isn’t the only exception to them.

Despite Ms Week’s job title of Special Assistant to the President, she’s not on the org chart, not on the President’s or Trustees’ websites, and a search of uoregon.edu shows no recent mentions. The only job description that Ms Weeks or UO public records would share when I asked was from 2012, and mentions working with the Governor and Trustees. Maybe her job is to make sure they don’t have unsupervised conversations with the faculty? I wonder how many other stealth administrators UO has. 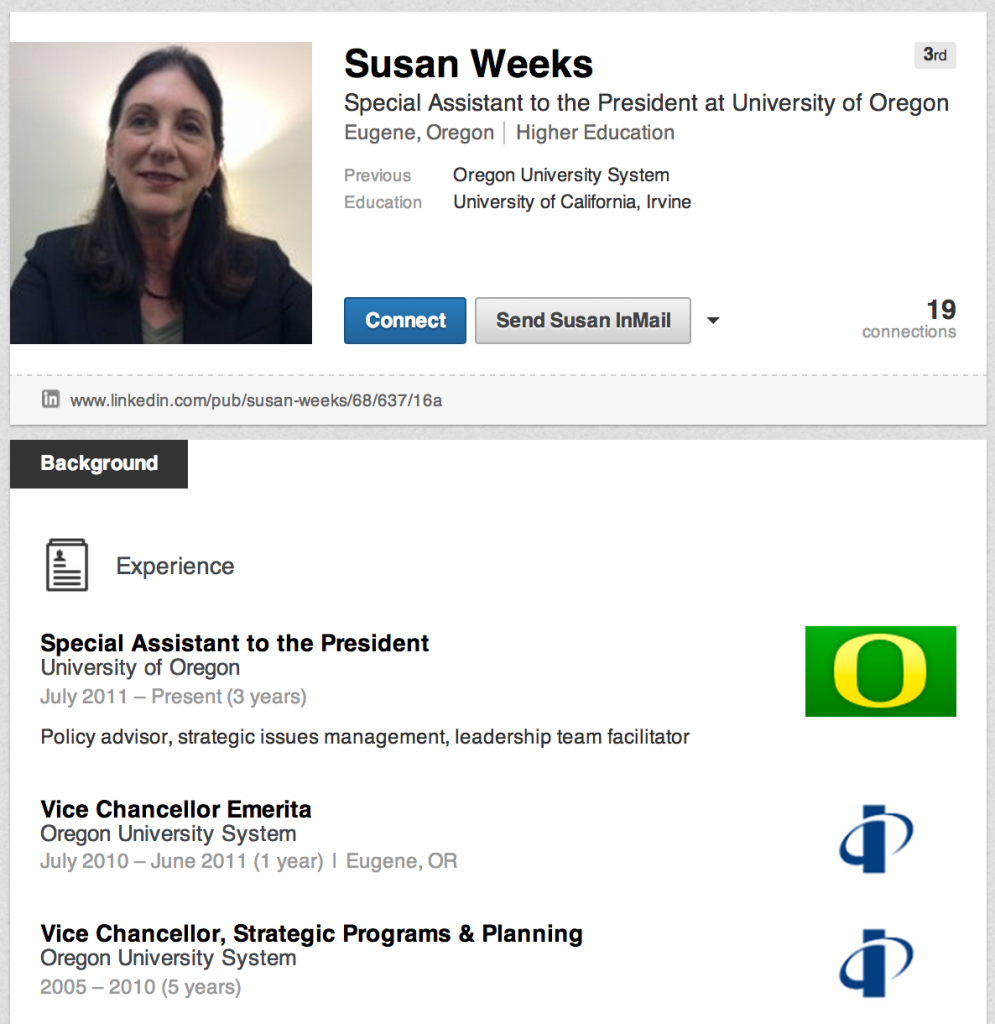 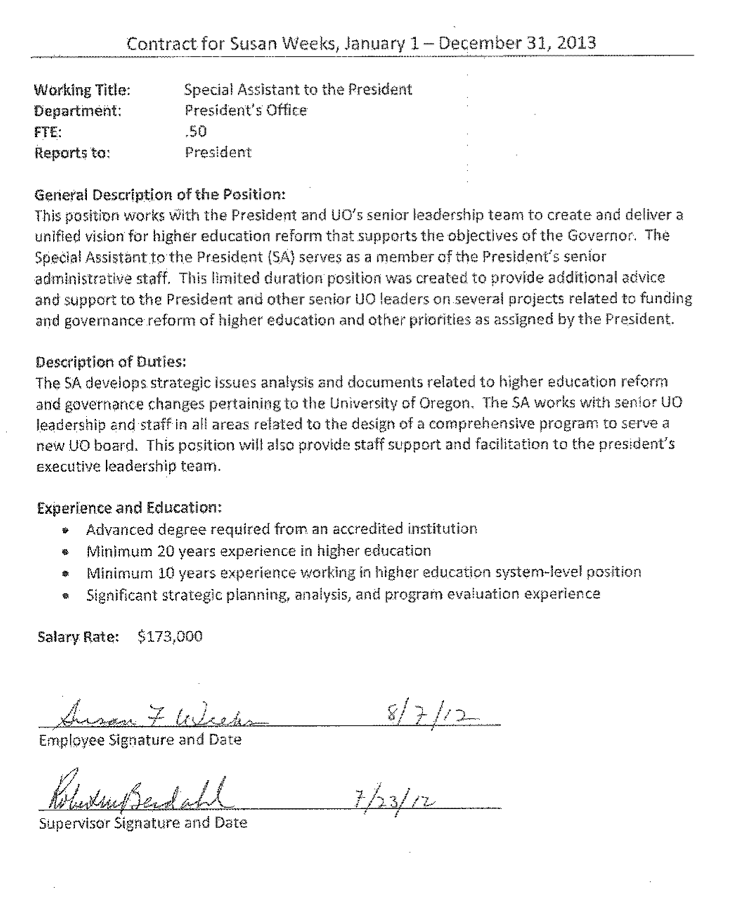 11/5/2014 update: Samantha Matsumoto and Alex Cremer have an excellent report in the Emerald on faculty ethnic and racial diversity. (Skip the weirdly distracting flash at the top).

It even mentions the lawsuit Dave Frohnmayer and John Moseley lost to Joe Wade, over their racially discriminatory hiring practices for UO administrators. That lawsuit – which Frohnmayer tried to hide from the faculty – required the creation of the job that is now held by Yvette Alex-Assensoh, and also the original contentious 5-year diversity plan.

It seems that UO is going to try a new 5 year plan. While the first plan at least paid lip service to socioeconomic, political, and intellectual diversity, the impression from this article is that the new plan will be narrowly focused on racial and ethnic diversity. That’s an unfortunate step backwards.

Meanwhile, as you can see from the info below, it seems Johnson Hall is still engaging in the same sorts of “good old-boy” hiring practices that lead to the Wade lawsuit.