Did a pinch of Diane Dietz’s integrity rub off on Tobin Klinger?

12/11/2014 update: One of the few funny parts of Thursday’s Board meeting was seeing UO public relations flack and $115K Duck advocate Tobin Klinger sitting in the press section, just one table over from Register Guard reporter Diane Dietz. Back in July Klinger sent this rant about Dietz to the RG editors, who promptly, and I’m guessing gleefully, published it. (Full disclosure: I’ve been known to hit send on a few hasty emails myself – but then I’m not a trained media professional and strategic communicator like Mr. Klinger):

I’m a recent transplant to Eugene, having spent a majority of my adult and professional life working with media in northwest Ohio.

Like many, I idealized life in the Pacific Northwest. Eugene and its people have lived up to my vision. Eugene is access to independent film, unique foods, outdoor activities, cultural happenings and community pride.

I don’t know that this shines through on the pages of The Register-Guard, particularly with the sophomoric “reporting” of Diane Dietz.

I admit to having a bias. Dietz covers my employer, the University of Oregon. In my role as head of UO public affairs communications, it is my job to defend the integrity and the reputation of the university. I advocate for faculty, staff, students, administration and athletics. I advocate for the Ducks.

Earning positive attention is a challenge with a reporter who is more interested in pandering to the lowest common denominator than demonstrating the value of higher education. Where else would you see the phrase “bowl of —–” five times in a single news article (Register-Guard, July 11)? This obvious play for shock value diverted attention away from the fact that the reporter waited 26 paragraphs before sharing important details from the university.

Moreover, this same newspaper in February dedicated significant space to a major Sunday story that used a blatant stereotype of Chinese students as its primary theme.

But today, Klinger’s “Around the 0” post on the UO Board meeting is actually not completely unfair and unbalanced. His lede?

On the first day following the conclusion of the strike by the Graduate Teaching Fellows Federation, the Board of Trustees of the University of Oregon heard impassioned comments from campus community members regarding trust and shared governance.

You’d almost think Dietz wrote this, instead of Klinger. It’s almost worth googling – although the report from student reporter Alex Wallachly in the Emerald, here, has much more interesting quotes.

So what happened? Did a pinch of Diane Dietz’s integrity rub off on Tobin Klinger? I’m guessing not. UO’s PR flacks must have got new marching orders from JH last night. And that, readers, is news. Really good news.

Jennifer Winters is one of Tobin Klinger and Tim Clevenger’s many PR flacks. Here’s the lede on her report on the Board’s wise decision to follow Interim President Coltrane’s advice, on the insistence of the Senate, and take the Triplett / Park power-grab motion off the Board agenda.

“Around the 0” is the blog that Bob Berdahl and Tim Gleason started to try and counteract the influence of UO Matters. Sometimes I wonder if I should worry that Johnson Hall will get a clue, try a little honesty, and actually end the need for UO Matters. Apparently not – here’s their take on the Board’s policy-grab: 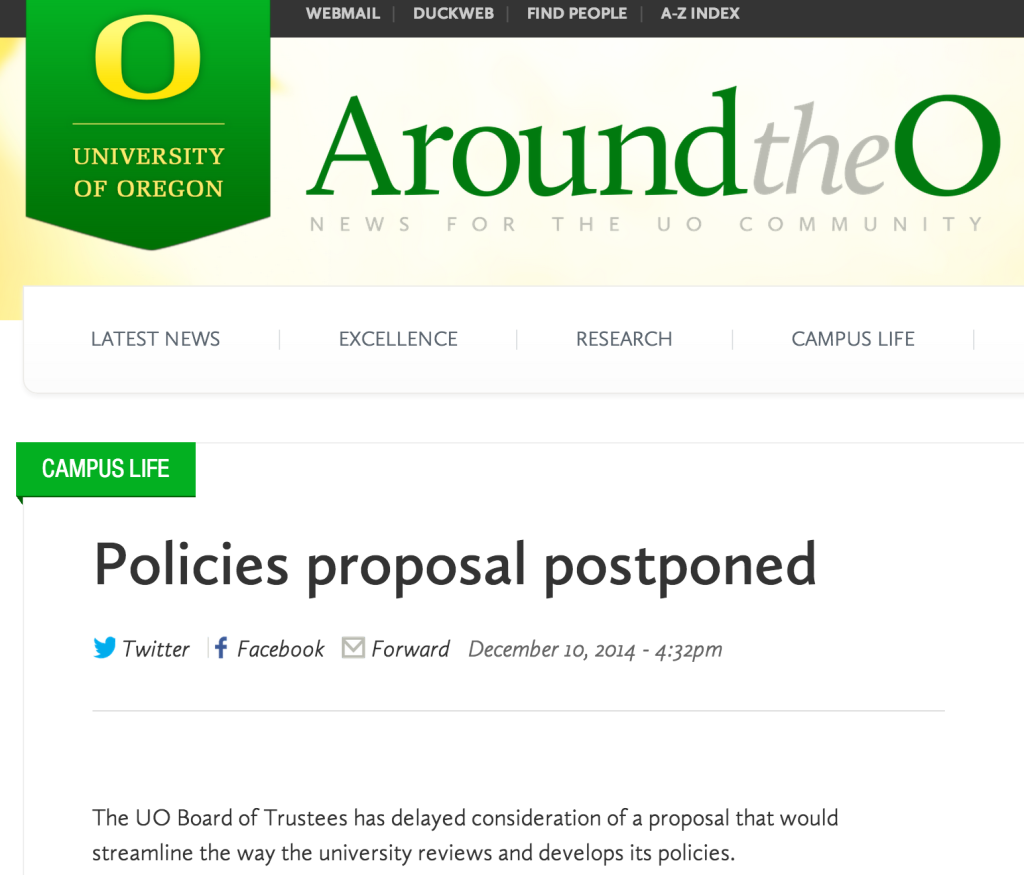 8 Responses to Did a pinch of Diane Dietz’s integrity rub off on Tobin Klinger?