Decoding the curious case of the University of Oregon’s misdirected records requires the deductive powers of a master sleuth — one with an ear for dogs that do not bark, an eye that can detect the fig behind the leaf, and a nose that will wrinkle at the whiff of a rat. But in the absence of a Holmes, a Columbo or even a Clouseau, ordinary Ducks are left to sort through the case on their own by eliminating various possibilities.

Did an unnamed professor do anything wrong when he obtained 22,000 pages of UO presidential documents? Apparently not — the records were placed in the university’s open archives, and were available to anyone. All that sets the professor apart from other members of the public was that he knew what to ask for.

Did the UO’s librarians or archivists, two of whom have been placed on paid leave for releasing the records, commit a breach? Evidently not — making archival materials available to the public is the very essence of their job. The records should have been redacted to protect against the release of such material as legally protected information about students, but redactions should be made by those who are the source of the documents and know what they contain.

Did the office of the president or someone else in the administration cause grave offense? A spokesman for the president says the documents do not contain Social Security numbers, medical records or financial data, eliminating several of the most serious possible violations of student privacy. So far no damage has been done.

What’s in the records, anyway? The only clue is a 14-page memo by the UO general counsel discussing the possibility of dissolving the UO Senate after the university faculty voted to unionize. To those who suspect the administration of plotting to undermine shared governance at the UO, it’s a smoking gun. To the administration, it’s an opportunity to show that the UO stuck with shared governance despite being given a legal argument for weakening it.

The other 21,986 pages could contain information about former UO President Michael Gottfredson’s departure, or the administration’s response to allegations of sexual abuse against three UO basketball players. Information of this kind should be public, or is likely to become public in the course of litigation.

So no wrongdoer can be identified in the release of the records, and no damaging consequences have followed. A detective might conclude that there’s nothing for the university to be terribly upset about.

I apologize to the Register Guard for posting their entire editorial. Given the subject, I hope they won’t sue me. All my posts on the Presidential Archives can be found here.

Rich Read of the Oregonian’s latest report is here:

As university officials urgently seek return of the documents, they are warning employees not to talk with reporters. Adriene Lim, dean of UO libraries, wrote an internal memo instructing library faculty, managers and staff members to keep a lid on information.

But Lim’s memo was leaked to Bill Harbaugh, a UO economics professor who posted it Thursday on his blog, UOMatters.com. Harbaugh has repeatedly declined to comment on matters including whether he’s the person who has the records. He says his attorney has advised him not to talk yet.

“If you receive any media inquiries about this situation, please do not try to handle them yourselves,” Lim wrote in the memo obtained and posted by Harbaugh. “Refer these calls to Tobin Klinger in UO’s Public Affairs group.” …

The skewering was in response to the letter Klinger – a trained media professional, whom UO’s pays $115K a year, and who really ought to know better – sent to the RG editors:

I’m a recent transplant to Eugene, having spent a majority of my adult and professional life working with media in northwest Ohio. Like many, I idealized life in the Pacific Northwest. Eugene and its people have lived up to my vision. Eugene is access to independent film, unique foods, outdoor activities, cultural happenings and community pride. I don’t know that this shines through on the pages of The Register-Guard, particularly with the sophomoric “reporting” of Diane Dietz. …

Sorry Tobin, but Eugene’s community pride isn’t just about “unique foods”. We’ve also got a legacy of free speech (obligatory Wayne Morse link) and some of us aim to keep it that way.

Speaking of which, redacted U of Nike coffee mugs are still available, here. All profits go to buy UO public records from Dave Hubin. Or maybe to someone’s legal defense fund? 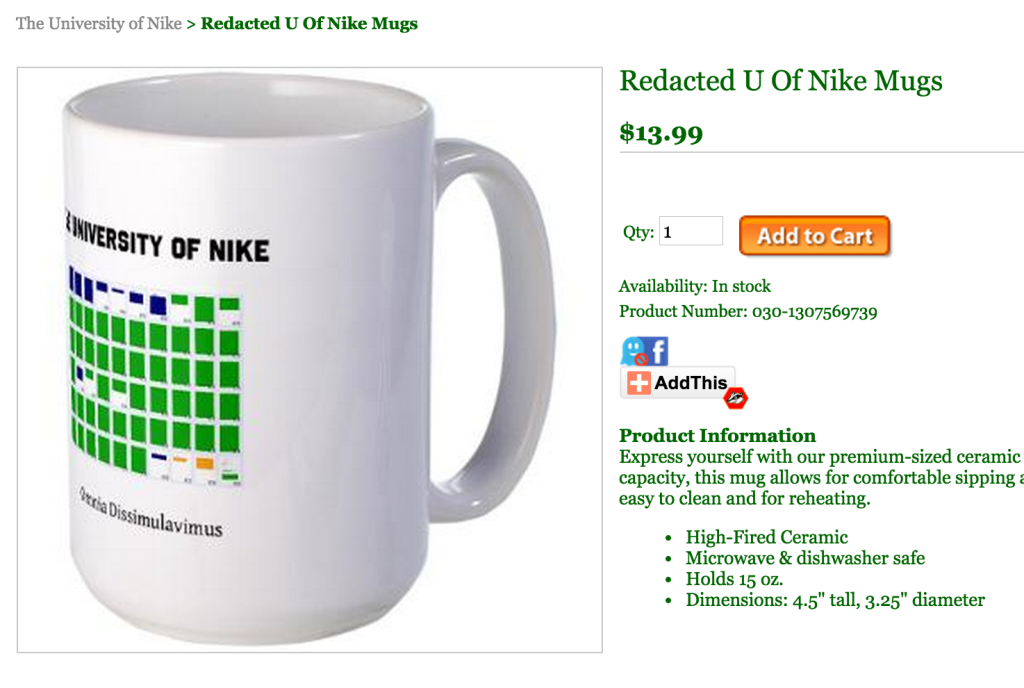