UO Board to clean up after Robin Holmes, Shelly Kerr, and Doug Park?

This could be an interesting meeting. UO Faculty Rep Susan Gary is phoning it in from sabbatical in Hong Kong, just as she’s done most of the year.  So are most of the other trustees. If this was the UO Senate, Chuck Triplett would be writing a stern speech about taking shared governance seriously, for Coltrane to read at the next BOT meeting.

First on the agenda is John Bonine (Law) urging the Board to investigate the actions that led up to the release of Jane Doe’s confidential counseling records. Speaking of which, Rich Read has a story today in the Oregonian:

I see two of the people under investigation at the table: VPSL Robin Holmes, and Interim GC Doug Park.

Robin Holmes leads off. The plan is to set up a “UOCare Comprehensive” plan that meets the ACA requirements (platinum), bill students who want that a fee each quarter If they need that. If they are on their parents’ insurance, lower fee, and they’ll bill that insurance for care. UOCare would also work with local providers, etc. Big changes. One unintended consequence: HIPAA rules would presumably prevent Shelly Kerr and Doug Park from accessing student counseling records.

Board Secretary Angela Wilhelms didn’t put the spreadsheet showing the costs of the alternatives in the online board agenda. Instead she passed out a paper version at the meeting. This is Wilhelms usual strategy for things she doesn’t want the press or board members to think about before they’ve heard the appropriate administrative spin.

The committee then moves on the changes in the student conduct code. Robin Holmes sat on these for years, ignoring the OCR’s Dear Colleague letter until the basketball rape allegations finally embarrassed her into action. Then the Senate and John Bonine and Caroline Forell (Law) made some changes to the code. Then for some strange reason the UO Board decided to reserve for itself the power to change the Student Conduct Code. So now we’ve got Robin Holmes trying to explain these changes to the few trustees who actually made it to the meeting.

The materials presented to the board by Robin Holmes said that the university was not supporting the Senate’s proposal that the university should fund legal assistance for rape survivors, since the Associated Students use mandatory student fees to pay for a lawyer for those who are accused of rape. Bonine called the ASUO and administration out on that in his statement to the committee. When it came time for Robin Holmes  to speak, she referred to Bonine’s statement and said that the university actually agreed, and would look for a sustainable way to provide legal assistance to rape survivors. Better late than never.

Trustee Ann Curry calls in from a plane, asks about more proactive methods to reduce sexual violence – mandatory classes, efforts to reduce alcohol abuse. Helena Schlegel talks about the efforts that the students are making on education. Coltrane announces that he will respond to the Senate deadline for a progress report on this by 5PM.

Announcement: 9AM Friday, Room 403 Ford Alumni Center. The Committees include:

Here’s hoping this will lead to a review of UCTC Director Shelly Kerr and her decision to give Doug Park Jane Doe’s confidential counseling records. But perhaps not. A reader notes:

I think the appearance of the UO Health Center on the Board docket of this meeting has to do with the aborted presentation about the new business/service model going into effect at the Health & Counseling Centers. Robin Holmes, Mike Eyster and Shelly Kerr were supposed to present on this at the last Board meeting but did not get a chance to do so because of the demonstration and discussion around the tuition increase. Both the Health and Counseling Centers will be moving to a more traditional approach and beginning fall 2015 will start billing insurance which will change the basic funding model of both centers. 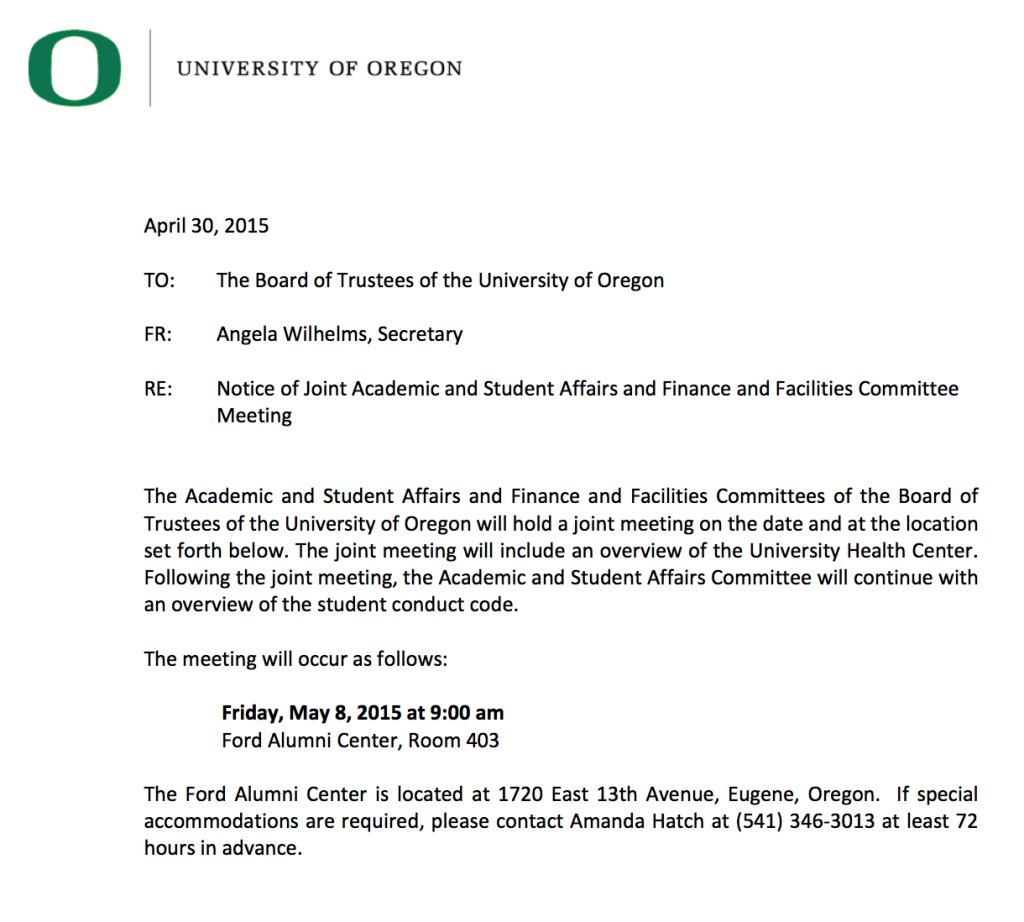 12 Responses to UO Board to clean up after Robin Holmes, Shelly Kerr, and Doug Park?