UO could save $3M a year by shutting down basketball, mothballing Knight Arena

Duck AAD Eric Roedl is predicting that basketball ticket sales this year will be just half of what they were in 2007. Under Ernie Kent, UO actually made money off basketball:

Under Dana Altman, operating expenses have increased by $2.3M, while ticket sales have decreased $2.3M. Instead of operating income of $1.7M, Altman’s got an operating loss of $3M. This ignores the cost of repaying the $235M in bonds for Knight Arena – about $16.5M a year. But those are sunk costs. UO would save $3M a year by shutting down its basketball program and mothballing Knight Arena. Of course we’d have to find another team to buy out Altman’s contract, which might be tough given the rape allegations. And the NCAA and PAC-12 would probably be upset.

So, will cutting season ticket prices help? AAD for Finance Eric Roedl is going to find out, cutting some prices by 40%: 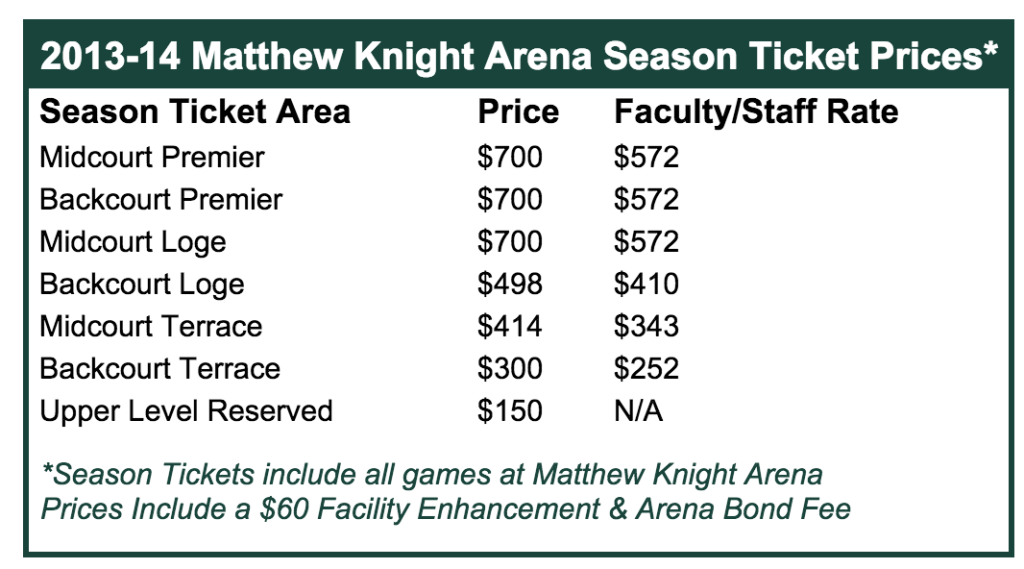 Probably not, but it might make the half empty Matt Court slightly less embarrassing for the boosters.

When Pat Kilkenny was trying to get the State Legislature to authorize $200M in tax-exempt bonds for Knight Arena, he predicted basketball ticket revenue would increase between 100% and 333%. Whoops, but then it’s easy to make mistakes when you are playing with other people’s money.

Interestingly, in comparison to the secret deal UO has made for the 2021 Track and Field Championship, back in 2007 UO President Dave Frohnmayer (and apparently the Legislature) insisted that the UO Senate Budget Committee and the Intercollegiate Athletics Committee be given information about the financial projections and make a public report on the Knight Arena project.

The 2008 report from the Senate Budget Subcommittee is here. It was pretty prescient – read it all. 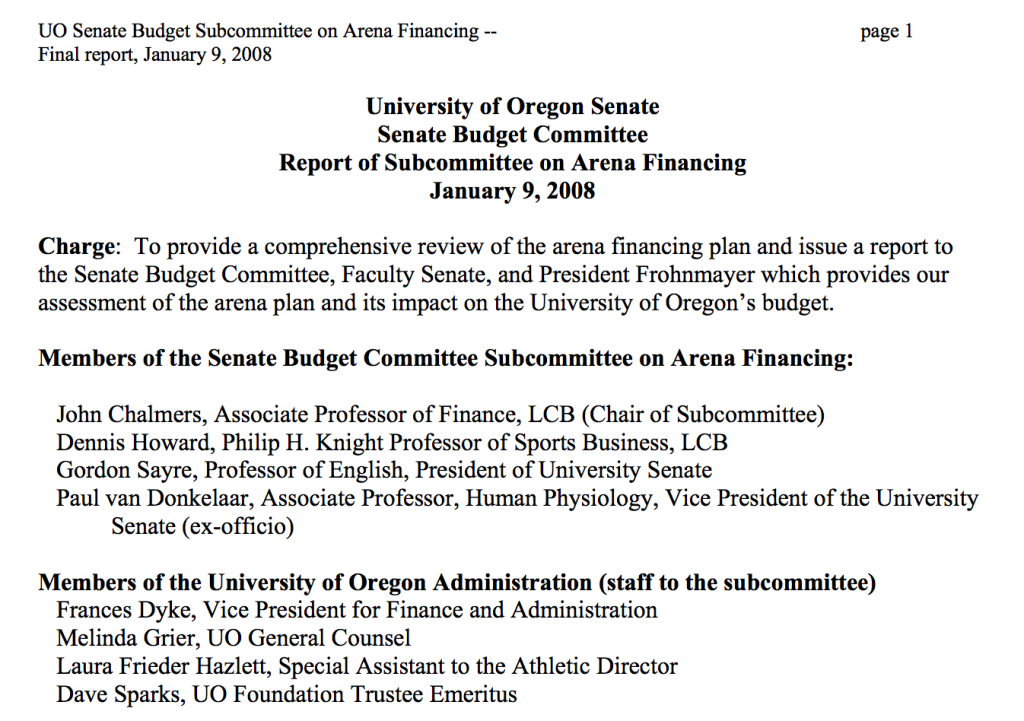 Among the many interesting recommendations:

Of course once Frohnmayer and Kilkenny realized the Senate was not going to roll over for them they not only ignored the report, they rubbed our noses in it. Instead of athletics paying for remediation for Mac Court (which was actually built with student fees on UO land, not with athletics funds) the academic budget is paying the jocks $467,538 a year for the Knight Arena land bonds  – thanks to this secret deal between Kilkenny and Frohnmayer, which I had to go to the Oregon DOJ to get UO to make public: https://dl.dropboxusercontent.com/u/971644/uomatters/IAC/Frohnmayer_Kilkenny_secret_200906.pdf

5/10/2015: Ducks give faculty and staff $10 baseball tickets to offset millions in athletic subsidies

With PK Park capacity of 4,000, and average attendance running around 1,700, this generous offer is costing the Ducks $0. Check “Around the 0” to get yours. Meanwhile the academic side is paying the Ducks millions in real cash for Matt Court, the Jock Box, the lawyers, etc.

For 2014-15 year Roedl budgeted a generous $2,314,399 for baseball expenses, while projecting only $360,000 for ticket revenue. That’s ~$2M in operating losses. Any questions about why the athletic department still needs those subsidies from the academic side? Dana Altman’s contract is for $1.8M a year and a plethora of bonuses including 15% of the gate over $4M:

With AAD Eric Roedl predicting $2.9M for 15-16, that’s way out of the money. Last year Altman was trolling the frat parties, trying to get the brothers to go to some games. Didn’t work. And after the alleged basketball gang rape, well, as Duck PR flack Craig Pintens says, this year will be “uphill sledding”:

A lot of Duck fans have no stomach for Altman, and have been canceling season tickets. So the Ducks have hit on a new scheme – have the basketball players call up season ticket holders and try and get them to renew. Duck flack Rob Moseley is so excited by this idea he tweeted it: 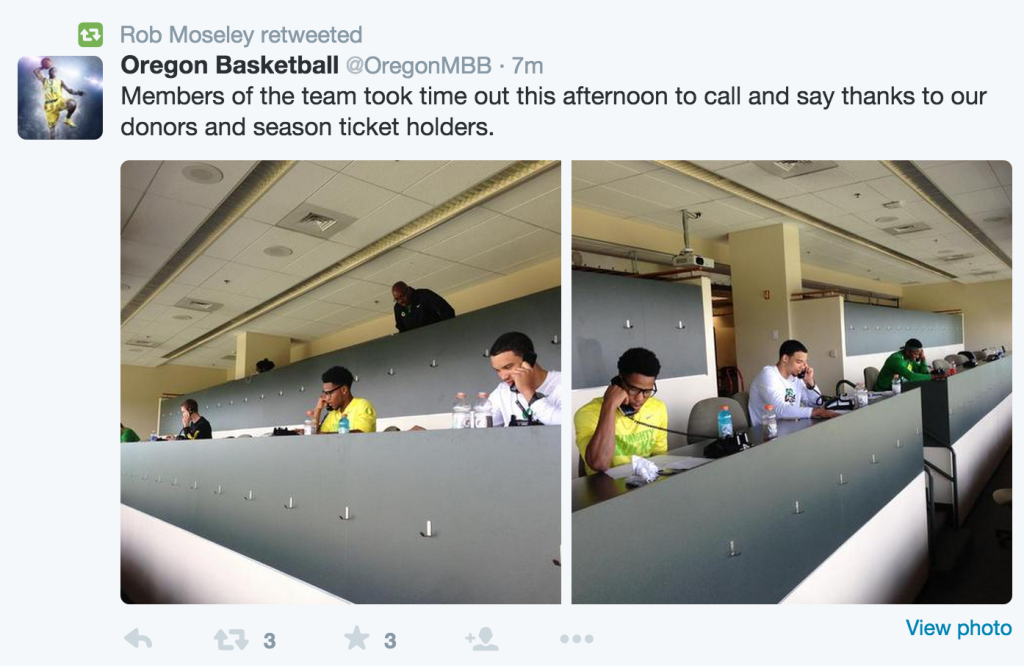 Hmm, you gotta think maybe these student-athletes should be studying, instead? Or enjoying the sunshine? After all, while Altman’s getting $1.8M and a chance at 15% of the ticket gross, this is the NCAA. The players get nothing from ticket sales. So maybe the time on the phone banks comes out of their 20 hours of mandatory team time?

Or maybe Altman is giving them brownie points to get a bit of that limited NCAA Student Assistance Fund money? Get 10 ticket renewals and we’ll bring your parents out for a game?

The University of Oregon has received your public records request for “all documents, including correspondence, related to the use of the NCAA’s Division I Student Assistance Fund during the 2012-13 and 2013-14 academic years. This request encompasses all correspondence with the Pac-12 related to the Student Assistance Fund” on 03/31/2015, attached. The office has at least some documents responsive to your request. By this email, the office is providing you with an estimate to respond to your requests.

The office estimates the actual cost of responding to your request to be $351.25.

17 Responses to UO could save $3M a year by shutting down basketball, mothballing Knight Arena