What’s it about this time? Duck bowl games.

In a nutshell, Duck Executive Senior Associate Athletic Director for Finance and Administration Eric Roedl – let’s just call him the DESAADFA – got hit up by some insurance salesman for a policy that would pay the Duck football coaches in the event their unpaid student-athletes won enough bowl games to trigger the lucrative bonus clauses in the coaches’ contracts: 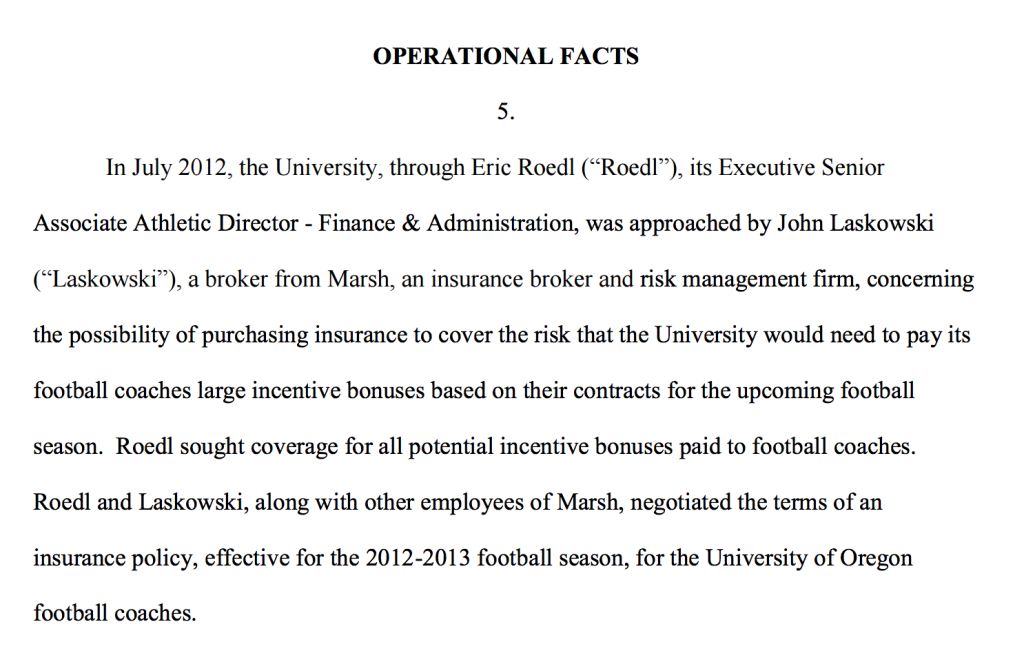 These bonuses topped out at about $1M. Eric Roedl paid Lloyd’s of London $489,940 for the policy: 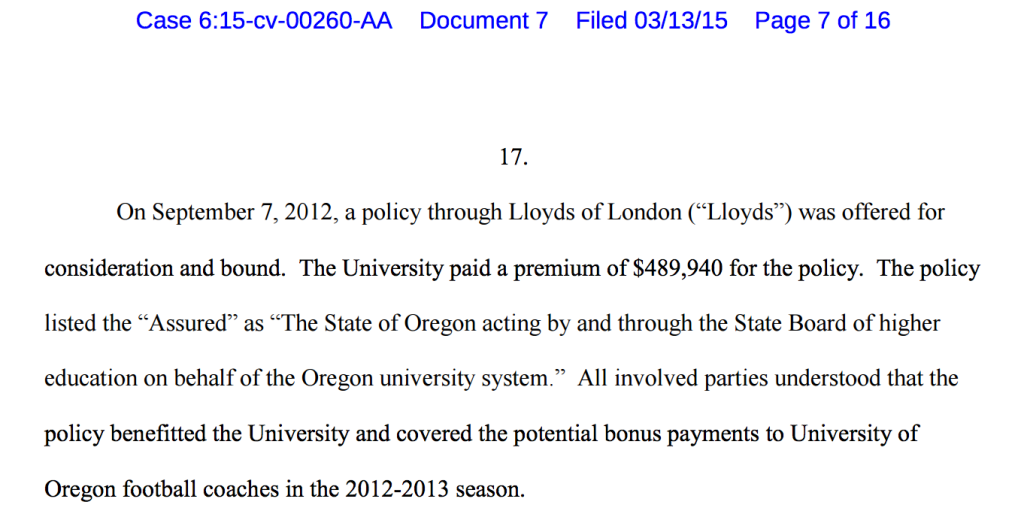 Unfortunately it seems that our DESAADFA had not read the fine print on the contract. Hey, it’s not like he was spending his own money, as Milton Friedman would have put it.

It turns out Lloyd’s was only obligated to pay the coaches if the Ducks won the BCS. If they topped out at some intermediate lesser rank, then the bonuses were UO’s problem – not a dollar from those pommie bastards at Lloyd’s.

Which, of course, is what happened: 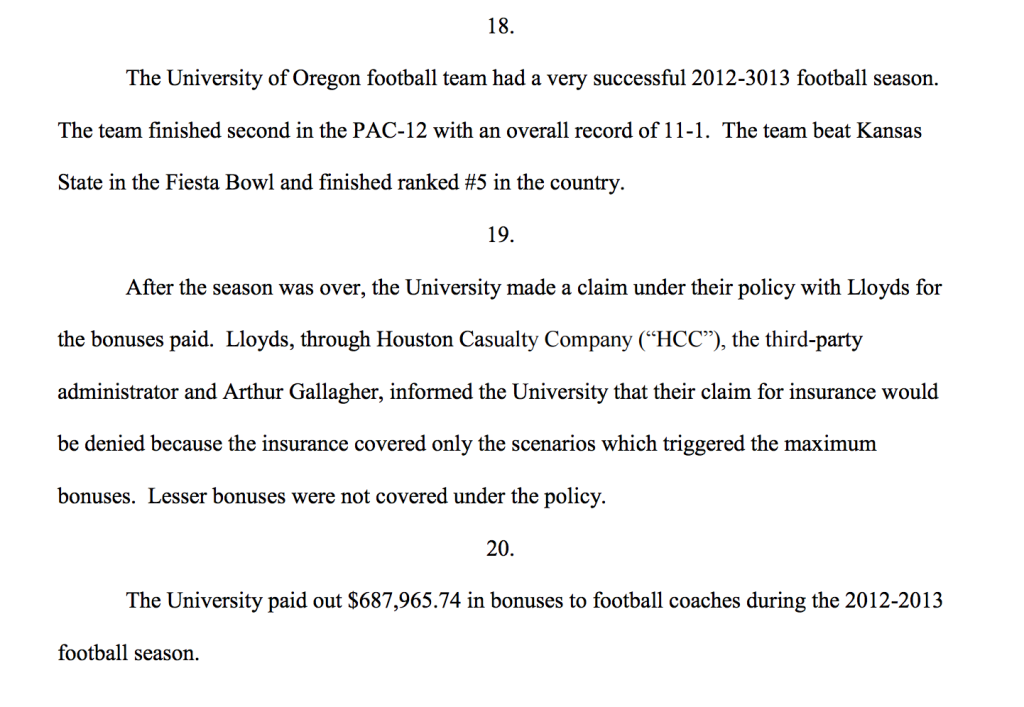 So the UO General Counsel’s Office promptly sued the Athletic Department’s Eric Roedl, for not reading the contract.

Just kidding. Roedl works for the Ducks. How bad would that look? Instead we sued the insurance brokers. HLGR is now collecting its usual ~$300 an hour. As for Duck Executive Senior Associate Athletic Director for Finance and Administration Eric Roedl?

He got a raise:

And, from the looks of the lengthy PACER docket available free from RECAP here, I’m guessing HLGR ain’t doing too badly on this deal either, when it comes to billable hours.

From what I can tell this is Harrang et al’s last unfinished business for UO, unless they get the contract to defend UO and former interim GC Doug Park in state court over the Bowl of Dicks case they lost in federal court. Which would seem unlikely.

Harrang has already had to change lawyers on this once, after Joshua Stump and a bunch of other attorneys left HLGR for Buckley: 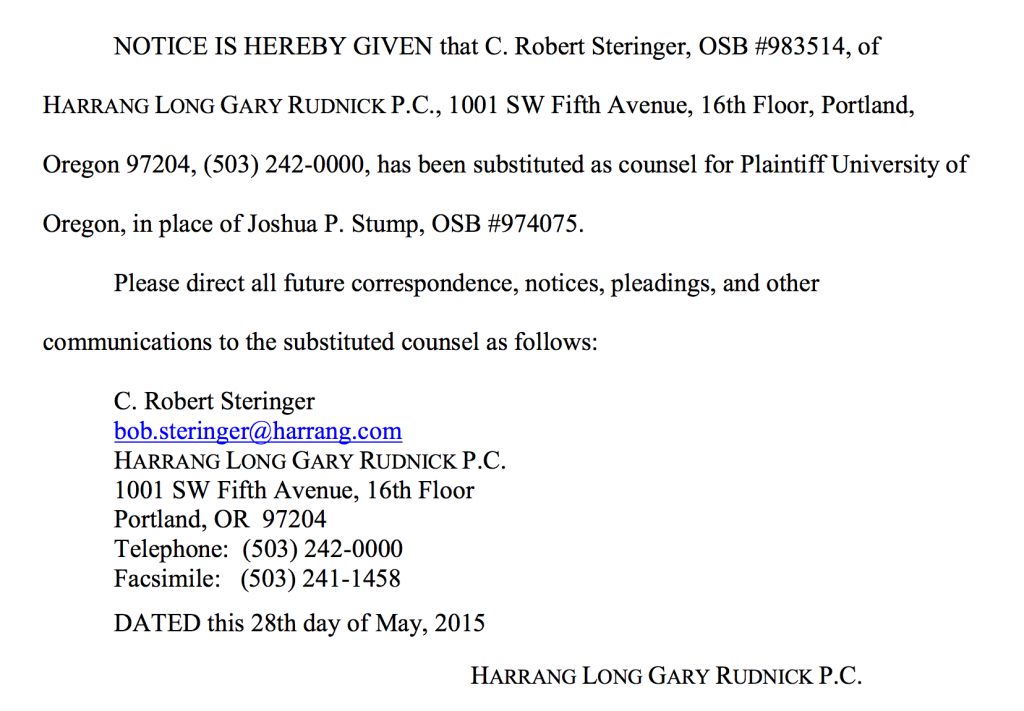