I’m no expert on the use of charitable contributions to buy prestige, but this case out of UO sure has some interesting twists, and might even displace the Avery Fisher Hall naming rights buy-back and the Central Park Zoo story on my syllabus.

The Securities and Exchange Commission alleges that UO accounting alumnus and donor Bob Jesenik raised $350M from investors in his Aequitas firm, promising them high returns from buying up and aggressively collecting on the student-loan debts that students at the Corinthian for-profit business and technical colleges had taken out to pay their tuition.

Corinthian had low completion rates and high default rates. In 2014 the Obama administration caught them lying to students about their job-placement record, and let students apply to have their tuition loans forgiven. The SEC alleges that Jesenik knew Aequitas couldn’t collect on these debts, and was lying to his investors – except of course some special insiders – while he used their money to pay his own salary and perqs and keep Aequitas’s creditors quiet. I’m no finance professor, but they’ve got a name for this kind of scheme. (The role that the strict defamation laws of the time played in preventing newspapers from reporting on the fraud is particularly interesting.)

While this was going on Aequitas was pledging to give scholarships to UO finance students – with plenty of publicity from UO – and Jesenik was using the prestige to get stories in the business trade press that helped make his company look profitable and encouraged new investors.

Diane Dietz has the story in the Register Guard, here, complete with quotes from Duck PR Flack Tobin Klinger, who is uncharacteristically spin-free about this sad story:

The SEC lawsuit filing, here, has the gist: 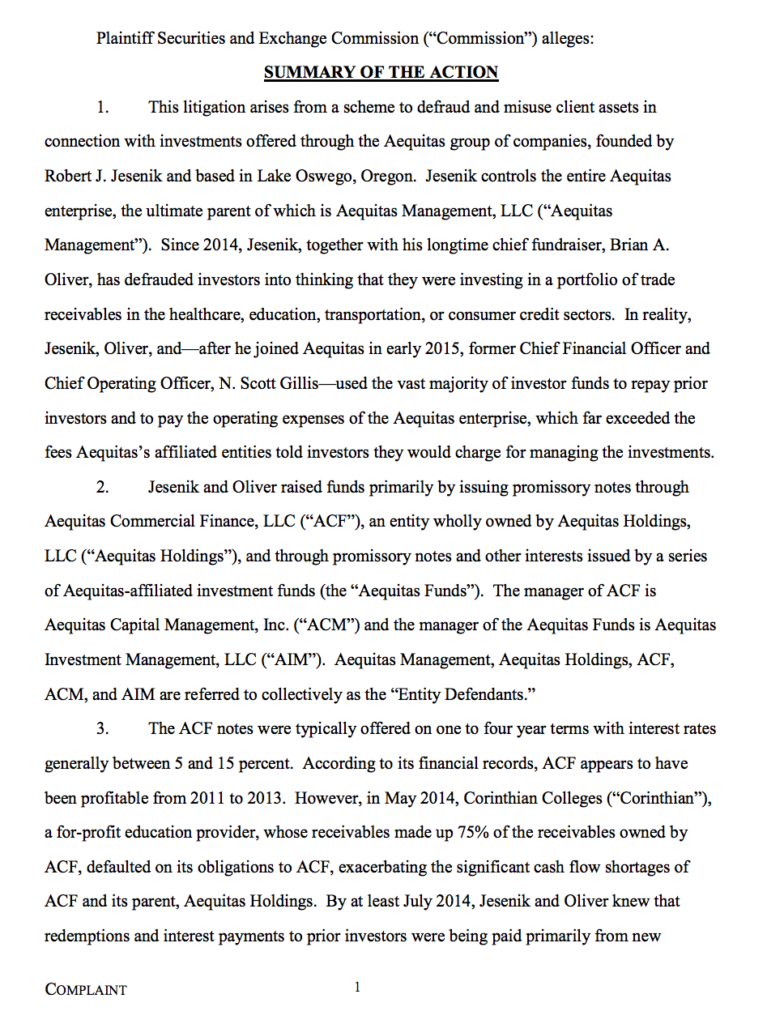 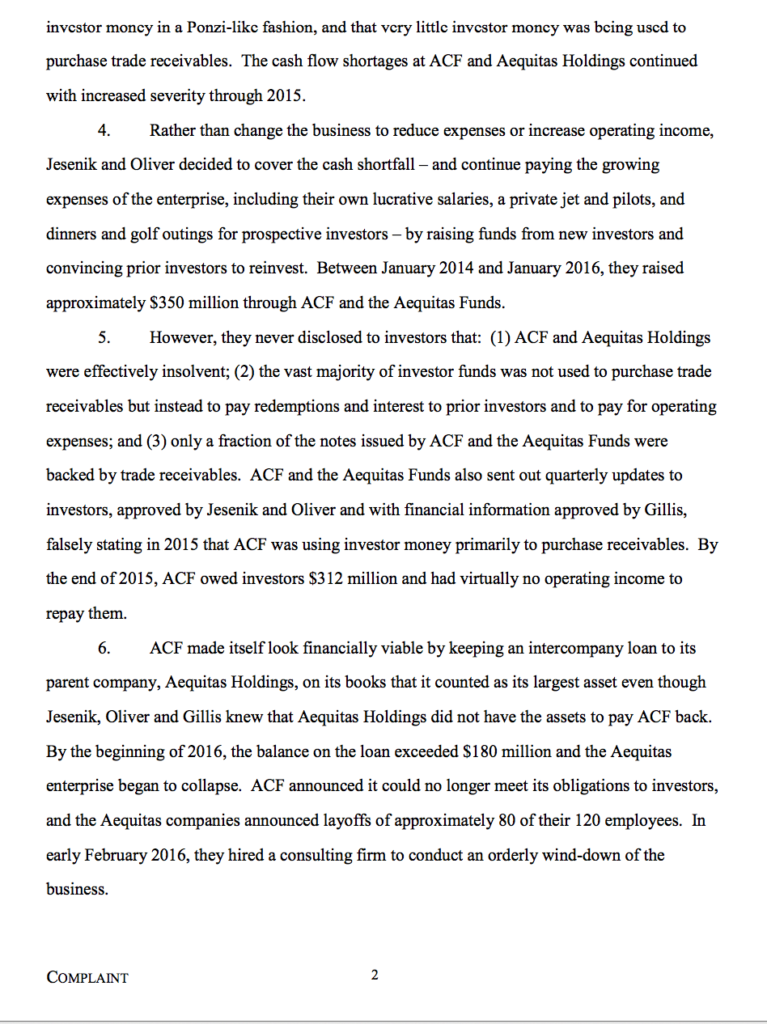 As part of Aequitas Capital Management’s effort to look solvent — even wealthy — in the eyes of investors, the company earlier this year announced it would give scholarships to students of finance at the University of Oregon and Oregon State University.

The image-polishing tactic by the high-flying Lake Oswego finance firm went along with opening a swank new office on Park Avenue in Manhattan, the use of a private jet, and “posh dinner and golf outings,” the U.S. Securities and Exchange Commission said.

…  It’s unclear exactly what the Aequitas collapse means to the universities. The UO faced a similar situation in the late 1990s with Capital Consultants, a Portland investment firm owned by class of ’64 alumnus Jeffrey Grayson.

Grayson, like Jesenik, had prospered financially and also volunteered for his alma mater. He served as president of the UO Foundation in the mid-1990s. He became co-chairman of UO President Dave Frohnmayer’s “Campaign for ­Oregon,” a then-record-setting UO fundraising drive.

In 1997, Grayson pledged $1.5 million toward a remodel of the UO’s old law school building. The UO was so pleased that it sought special dispensation from the state to name the building after a living donor, and upon completion, it became Grayson Hall.

But Grayson had provided only $850,000 by the time his investment firm — known for its risky, unorthodox deals — collapsed amid an SEC investigation and accusations that he was hiding losses from his investors.

… Because of the donor secrecy provisions in the state law — requested by Frohnmayer and adopted by the Legislature — there’s no public account of how much Aequitas or its principals gave to UO or to OSU.

Actually, I don’t think it does. The Oregon DOJ’s Task Force on public records reform, led by AAG Michael Kron, has catalogued all the public records exemptions in a spreadsheet here. The donor exemptions are narrow:

And while the secretive UO Foundation’s lawyer was able to convince AG John Kroger to claim the public records law didn’t apply to them, from what I can tell UO has never claimed to be exempt, and has provided donation amounts in the past: