“Art of the Athlete” II – next spring in Aix-en-Provence!

The “Art of the Athlete” course was one of the more hilarious scams set up by the Duck Athletic department, presumably with the help of their academic liaison Lorraine Davis, although it’s often hard to get the administration to reveal exactly what it is that Ms Davis does:

The Art of the Athlete course was only open to athletes, taught in the Jock Box, and until the Senate’s IAC found out, every athlete got an A+, which certainly helped pump up the Duck’s academic excellence. As soon as we reported it to the NCAA it was changed to pass/no-pass, and supposedly opened up to unathletic students.

UO’s academic side currently spends about $2M a year subsidizing the athlete-only Jock Box operation, paid out of UO’s general fund: i.e. state support and tuition. This is roughly $4K per athlete. In contrast expenditures on regular students are about $400 per student. You’d think that the Ducks would be able to pay for the tutoring for their athletes themselves, with some of the Duck Athletic Fund donations they collect – but any money left over after paying tuition goes to the athletic department’s own expenses.

So has the athletic department made any effort to get the Duck boosters to cover some of this subsidy? Quite the opposite. A few years ago Robin Jaqua gave $5M to set up an endowment to help with this, but AD Rob Mullens got his hands on it before the Provost did, and he uses it to pay for the utility bill – the only part of the Jaqua Center operating costs that the athletic department is responsible for.

And now it’s getting crazier: instead of giving to help the academic side offset the $2M athletic tutoring subsidy, UO’s development office is letting a Duck donor give money for a second gut “Art of the Athlete” course:

The Art of the Athlete in Aix-en-Provence: 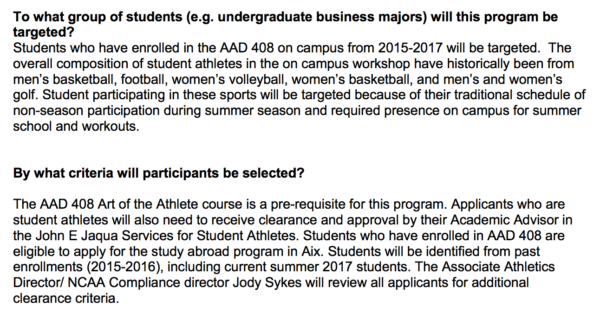 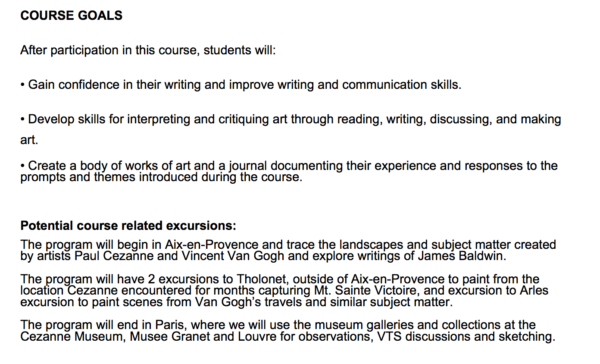 One Response to “Art of the Athlete” II – next spring in Aix-en-Provence!