Senate votes overwhelmingly against astroturf next to Willamette

After a full and frank and very interesting discussion, the motion passed 29 to 5. The President’s Office has 60 days to respond. 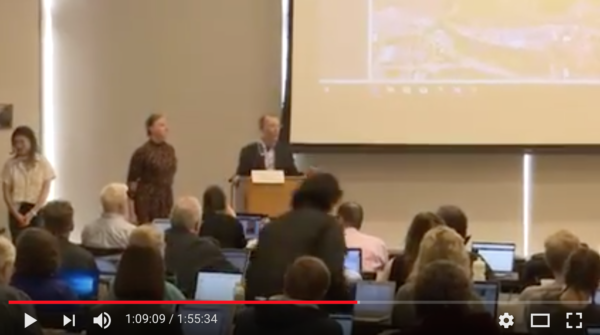 Reminds Senate of the Metrics Town Hall, this Friday at 11AM, 156 Straub.

Clarifies Architecture letter: Faculty can meet as they wish, but not as a formal part of shared governance unless it’s open to all. Retaliation by faculty, i.e. in tenure and promotion, against those who have other views is forbidden. [As is  retaliation by administrators, I assume.]

Supports North Campus / Riverfront CUP plan. No truth to rumors this is about Tracktown 2021. No current plans for astroturf.

Kevin Reed announces late breaking news, from his conversation with the Eugene City Attorney, that the city planners went off the farm when they told me, and others, that the CUP could be divided.

UOM: I will make a motion to divide the routine course approvals from the less routine requests that the Senate approve serious changes to COE and COD degree requirements, such as this:

ACADEMIC POLICIES • Upon request of the College of Design and approval by the Undergraduate Council, the degree requirements for the bachelor of fine arts are changed as indicated below. Effective fall 2018. o Minimum credits reduced from 220 credits to 180 credits o Group requirements. A minimum of 12 credits in group-satisfying courses in each group for a total of 36 credits (no more than three courses from one subject); no more than one course within the same subject code of the major. Limitations on subject codes remain the same o Eliminate the language and mathematics minimum o UO residency requirement: 45 after 120

Explanation, not in the motion:

The change above was made at the request of the College of Design, currently home to the only BFA degrees at UO, to better align our BFA degree with national standards.  BFA degrees across the country more typically require the same number of minimum credits as the BA or BS degree.  The five-year BFA is no longer standard practice. Because the BFA degree typically requires more studio and practice time in the curriculum, it is standard to reduce other general education requirements.  The reductions above are in alignment with other UO degrees of this type such as the B of Music, B of Education, B of Architecture.  As noted in the proposal and presentation from Roxi Thoren and Laura Vandenburgh, this change is intended to follow the guidelines set by the National Association of Schools of Art and Design defining the BFA degree requirements as 120 semester credits or 180 quarter credits.

Motion to divide is opposed by Frances White, it fails, and it is followed by an extensive discussion of degree program changes by the Senate.

We went through a similar discussion two years ago about the Curriculum report over the proposal to allow Arts and Administration to give BA degrees. The same argument, that the Senate should defer absolutely to the committees, was made. The Senate debated and approved the degree proposal on what I recall was a narrow vote. 18 months later the administration decided to close AAD, suspend the new BA, and fold the remaining courses into PPPM.

2.1 BE IT THEREFORE RESOLVED that GPA-only based routes to departmental honors be Eliminated effective Fall 2019

Discussion focuses on students getting HC honors and Departmental Honors. Will come back for a vote after break.

But it seems we were misinformed. Actually, the city has no problem with UO separating these requests:

The University could submit two (or more) separate CUP applications for different areas of the site. As well, it is also permissible to submit one CUP for the entire site.

And here’s President Lariviere’s response to past Senate efforts to address use of the riverfront:

It is an excellent idea for the University Senate to have a robust discussion of development in the [Riverfront] Research Park. I would value knowing the Senate’s views on this matter. If the discussion results in a resolution, I will sit down with the Executive Leadership Team to review the issues, legal and otherwise, that the resolution raises. I will then be happy to meet with the Senate Executive Committee to discuss our collective concerns before providing any necessary explanation to the Senate.

At the start of the meeting Kevin Reed announced late breaking news, from his conversation with the Eugene City Attorney, that the city planners went off the farm when they told me, and others, that the CUP could be divided.

After a full and frank and very interesting discussion. the motion passes overwhelmingly. The President’s Office has 60 days to respond.