Summer time, so here’s a rerun. FWIW the FBI is now on it:

12/13/2015 update: Jeff Manning’s new report in the Oregonian, here, lays out what is known so far, and quotes the French Ministry of Justice: 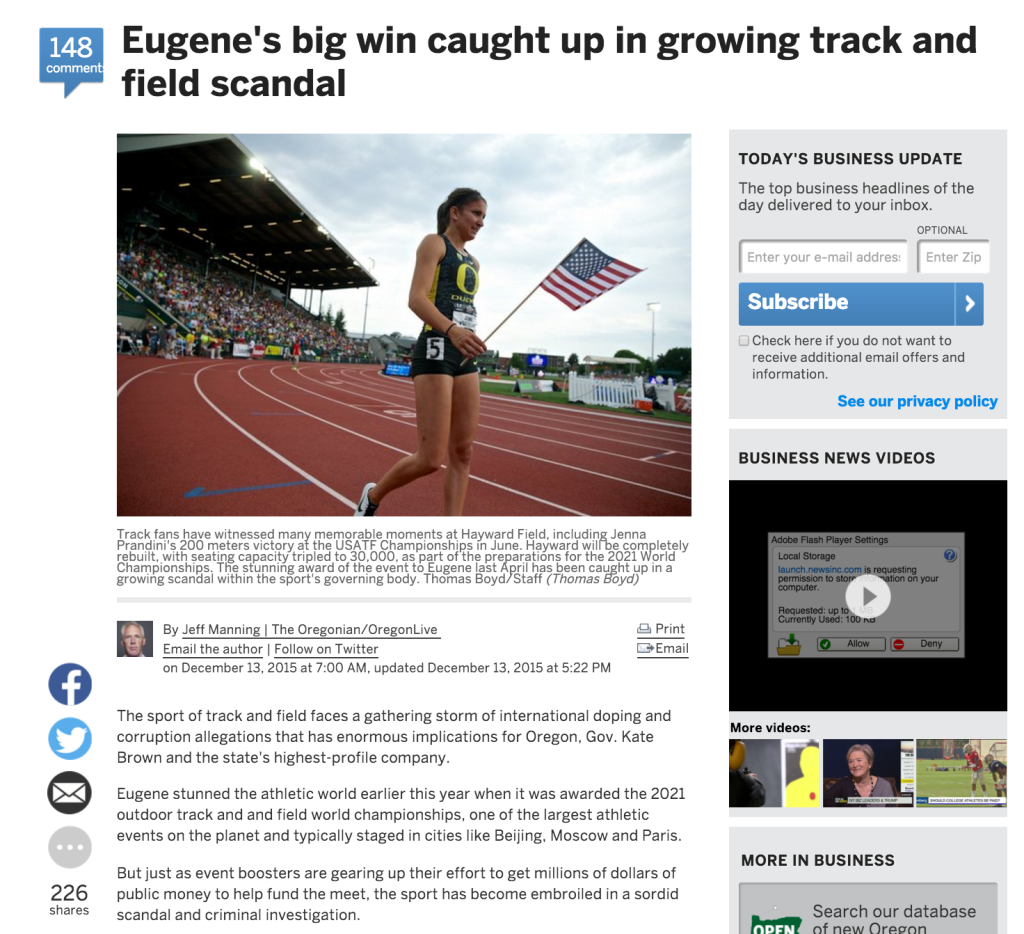 “The object is to determine the conditions under which the hosting decision was taken,” said France’s Ministry of Justice said in a statement, “and whether corruption offenses, money laundering or a conspiracy to benefit from criminal association have been committed in France.”

If the Foundation threatens to sue the French for defamation over that “money laundering” phrase, as they once did to me, I can recommend several excellent lawyers who are not impressed by the blustery language of the Foundation’s attorney, Thomas Herrmann of  Gleaves Swearingen: 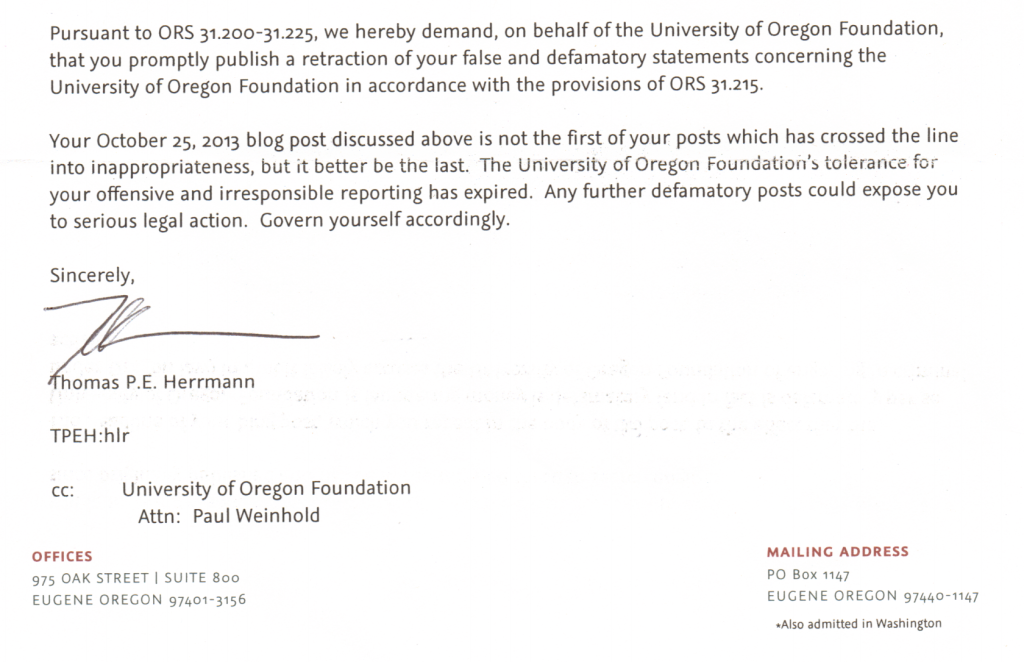 That said there is no mention in the story indicating that the French are specifically investigating the secretive UO Foundation, although Manning shows they have been heavily involved in the bidding and the efforts to secure $30M-$40M in state money:

The University of Oregon Foundation is also throwing all its weight behind the championships. “On behalf of the University of Oregon Foundation, please accept this letter as our written guarantee that the UO Foundation will cover any potential shortfall of the future organizing committee budget of the IAAF World Championships in Eugene in 2021,” wrote Paul Weinhold, the foundation’s chief executive, in a letter to the track and field federation.

Weinhold insists the guarantee poses no risk for the non-profit.

The foundation is also playing a key role in a massive renovation of Hayward Field in time for the championships. The current plan calls for the foundation to manage a privately funded rebuild that will triple seating capacity to 30,000.

FWIW, the Oregonian comments are running heavily against state subsidies.

The UO Foundation’s 990 report for the FY ending June 30 2015 was due at the IRS on November 15th. These reports give some basic financial information. However, the Foundation typically runs out the 2 allowable 3 month extensions until the last possible day, meaning we won’t know have even this basic financial data until June 15th, nearly a year after the FY closes.

At a meeting in February of 2015 in Monaco, Lananna and Fasulo said they told Diack they didn’t know if they could keep their coalition of public and private partners together if they had to draw up a new bid for 2021 and go through another formal process

They said Diack listened politely but made no commitment.

“He said he would reflect upon it,” Lananna said.

Lananna said they didn’t offer Diack anything that even could be interpreted as a bribe. Nor, he said, did Diack request anything.

“Absolutely not,” Lananna said. “Nothing, in any way, shape or form. Nothing was asked, implied or suggested. We did not. He did not. No.”

Not even a Rolex?

So now our university’s foundation is subsidizing a track meet and sinking money into yet another sports project, right in the middle of what is supposedly a $2B academic fundraising campaign. No surprises as to what our VP for Development is now spending his time on:

And it looks like UO’s Director of State Affairs Hans Bernard is going to be spending his time this session lobbying the legislature for money for sports, rather than for academics:

And who is paying Vin Lananna to organize all this? UO’s Public Records Office really doesn’t want to answer these kinds of questions, which are now coming in from the BBC among others: 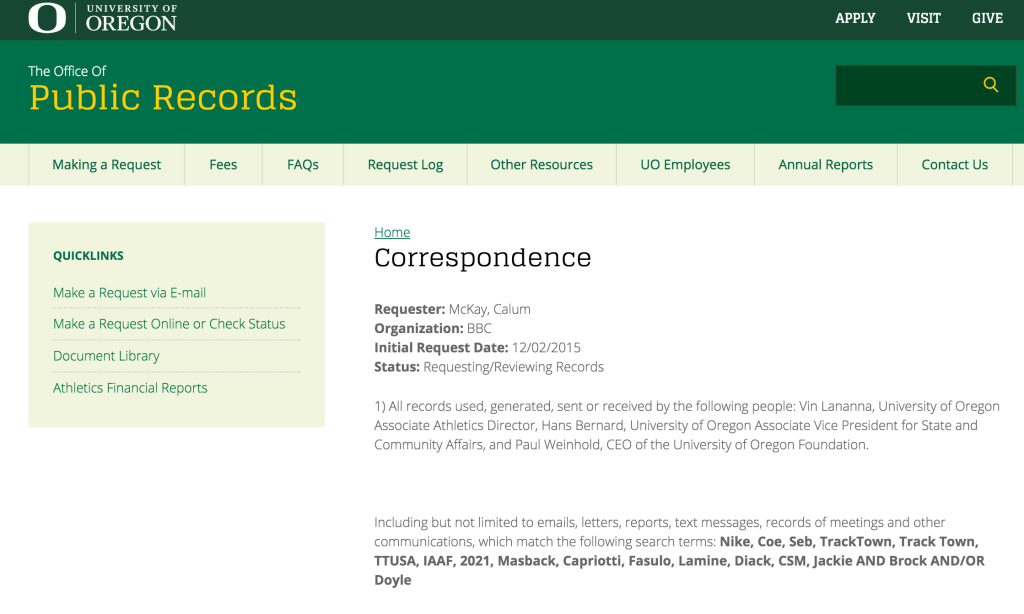 Meanwhile the RG, London Times, BBC, WSJ and the Oregonian are asking Gov. Kate Brown’s office for more, public records, including emails going back to Kitzhaber. Maybe Cylvia Hayes got a contract for making the IAAF sustainably carbon neutral?

That’s the report from Diane Dietz in the Register Guard, here:

French prosecutors on Thursday confirmed they have opened an investigation into the decision to award the 2021 track world championships to Eugene without an open bidding process.

The financial prosecutors’ office in Paris said it aims to determine whether corruption, money laundering or other crimes may have been committed in the International Association of Athletics Federations’ decision and, if so, whether prosecuting them might fall within French jurisdiction.

The Eugene bid effort was led by Track Town USA, a Eugene nonprofit headed by Vin Lananna, who is also a top executive at the University of Oregon Athletic Department.

…  The January 2015 email, sent three months before the surprise IAAF vote to award the 2021 championships to Eugene, was from a Nike executive to Lananna on the subject of Lananna’s pitch for the 2021 championships. The Nike official said that the incoming chairman of the IAAF, Sebastian Coe, was in favor of the Eugene bid. In addition to his IAAF role, Coe was working for Nike at the time, and Nike Chairman Phil Knight favors Eugene for the IAAF meet.

The university released the document in October only after the newspaper filed an appeal the Lane County District Attorney’s Office.

Update: Ken Goe in the Oregonian:

“We presented the bid with complete transparency in 2019,” Lananna said. “The only thing different about the ’19 budget and the ’21 budget is that we crossed out the number on the top of the budget, and it went from ’19 to ’21.”

The RG has a story with the latest quotes from Lananna, here:

“We stand by our bid, we stand by the integrity of the bid and we are 100 percent confident that there has been nothing outside of what are the norms of the presentation of an IAAF bid,” Lananna said Wednesday during a news conference attended by Portland mayor Charlie Hales at the Oregon Convention Center, which will host the World Indoor meet March 17-20.

Given that past IAAF president Lamine Diack has been arrested over allegations that he took a $1M Russian bribe to cover up doping, among many other IAAF scandals, this doesn’t seem like a good time to be talking about IAAF norms. It also conflicts with the message new IAAF president Seb Coe must get out regarding his reform efforts, if he wants to keep his job. And Coe has already said that Diack’s decision was flawed: 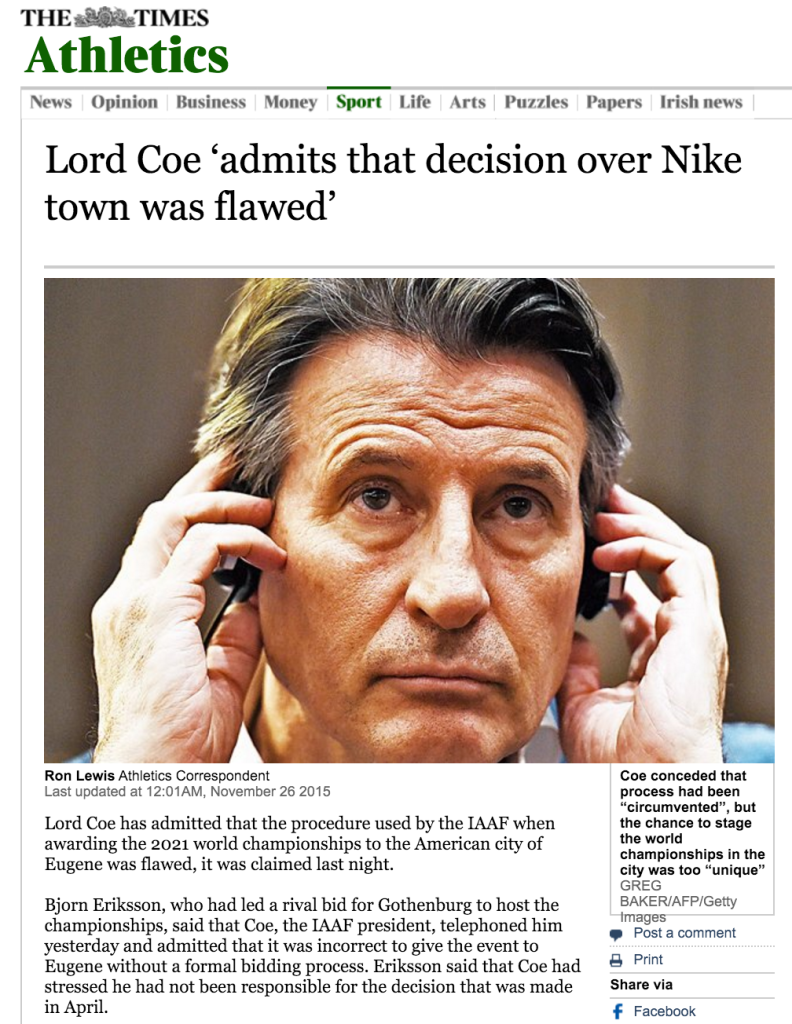 This video of Track Town CEO Mike Reilly promising Diack that Eugene will accommodate the “IAAF Family” in the kinds of luxurious hotels to which they have become accustomed is not going to help: 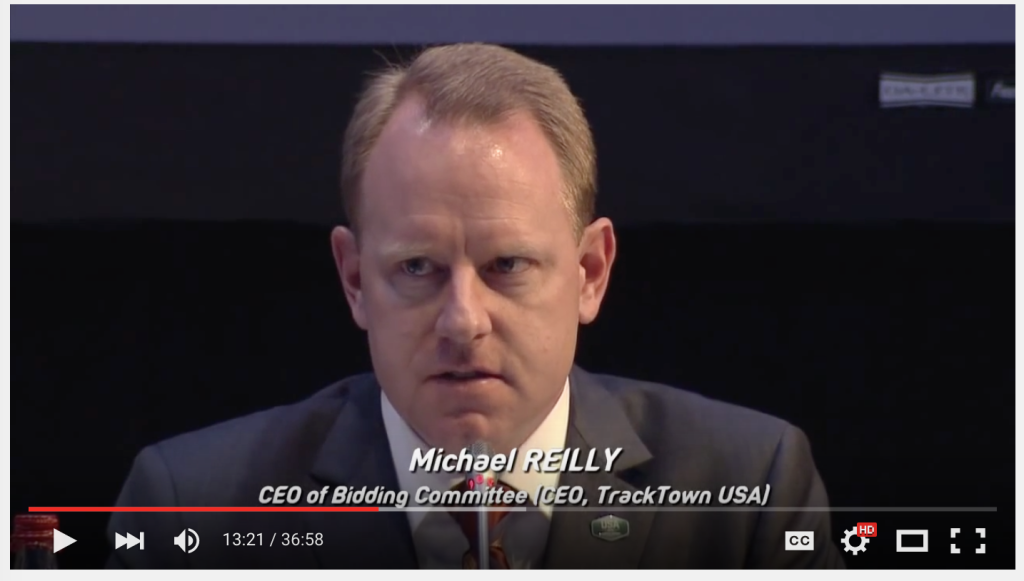 I wonder who will pay for that? Oregon taxpayers, if UO’s Hans Bernard gets his way.

The decision by the scandal-hit IAAF to award the 2021 World Athletics Championships to the American city of Eugene is being investigated by French prosecutors, the BBC has learned.

… Other emails seen by the BBC reveal that Lananna made at least one trip to Europe to visit Diack a few weeks after this email was written.

BBC sources have confirmed French investigators want to know more about how Diack arrived at the decision to give Eugene the event.

Meanwhile UO’s State Affairs Director Hans Bernard plans to hit up the state legislature for ~$30M to renovate Hayward Field and subsidize the IAAF championships, while claiming this would not be a trade off for academically focused funding. Sure it wouldn’t: 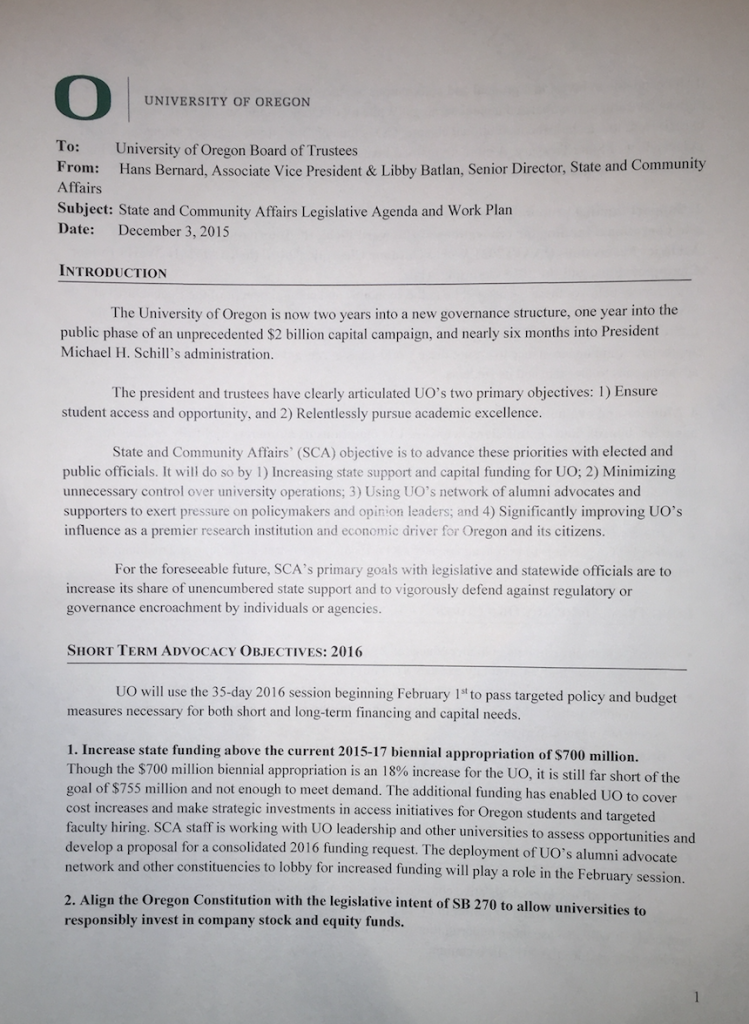 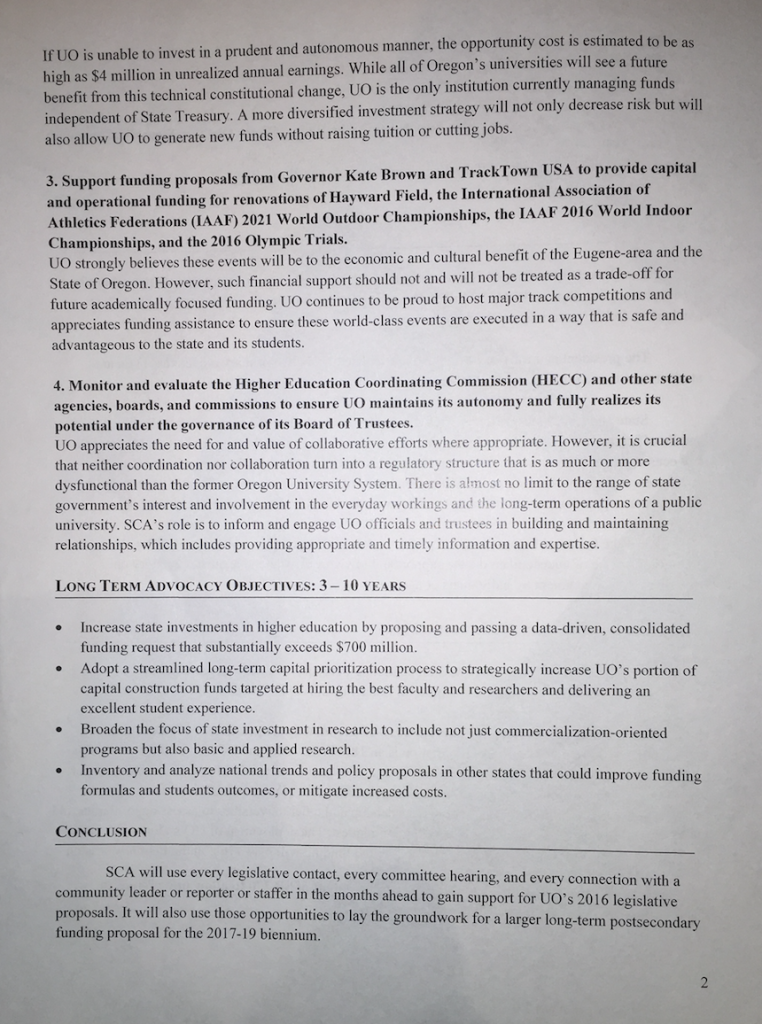 Other posts here. The RG’s Diane Dietz had an excellent series of reports on this last fall:

Paul Weinhold, CEO of the UO Foundation, appeared before the international body as a man with wherewithal who “manages $1 billion worth of assets.”

Weinhold unequivocally pledged that the UO Foundation — keeper of the university’s donated scholarship, research and athletics funds — would provide financial guarantees against loss if Eugene-based TrackTown USA won the bid to bring the two-week athletics event to Eugene and the UO campus.

“To be clear,” Weinhold told the 27 members of the international body, “the University of Oregon and the foundation are unified in our financial commitment to a successful World Championship in 2019.”

Meanwhile, Gov. John Kitzhaber, in a video played at the governing body’s meeting in Monaco, promised to ask the state Legislature to pony up $40 million to help fund the event. …

And UO board bars the public from ‘training’ event:

The University of Oregon Board of Trustees excluded a newspaper reporter and a blogger from its Saturday morning meeting at the Hilton Eugene.

Board Secretary Angela Wilhelms said the board had convened for a “training” about the operations of TrackTown USA and the public — and its media representatives — were excluded.

Trustees need to understand the nonprofit TrackTown’s operations because, even though it’s not an official part of the university, TrackTown stages events at Hayward Field, Wilhelms said.

“It’s important to understand the interplay between the two,” she said.

Saturday marked a third day of meetings for the new UO board, which took charge of the university in July.

Board members and university administrators — many in yellow and green regalia — attended the 8:30 a.m. breakfast meeting it the Hilton Eugene’s 12th-floor Vista room, which has floor-to-ceiling windows and spectacular views of the city.

The plan was to finish the board’s business in time for kickoff at Autzen Stadium. A quorum of the board planned to attend the game. The agenda emphasized the gathering was a “social event only,” according to the board’s agenda.

The nature of the Saturday morning meeting evolved daily through the board’s fall session. On Wednesday, the agenda posted on the trustees’ website said this: “Public Meeting, Eugene Hilton, Vista Room.”

On Thursday, the first day of the board’s fall meeting, Chairman Chuck Lillis began describing the Saturday meeting — and was interrupted by Wilhelms.

“There’s nothing like having a coach,” Lillis said, before continuing.

“We’re going to hear a discussion. It will be in a nonpublic environment about the possibility of the state of Oregon hosting, centered in Eugene, the world championships of track and field.” …

UO’s Public Records Office has repeatedly stalled the release of public records related to this bid.