While President Schill’s charge to the task force told them not to make a recommendation for or against breakup, they ignored this, and recommend against a breakup. He has accepted their advice, for now. Perhaps the new provost will try to restart this fight someday, but the report from Karen Ford’s committee doesn’t leave a lot of room to try. Presumably the next step will be to start integrating the Knight Campus into CAS.

See below for the full report and Pres Schill’s response. From the report’s conclusions:

Even those on the Task Force interested in learning about other, possibly better, college structures raised concerns about the costs (financial, time, effort, and personal costs) of restructuring CAS. There is a general skepticism about making large structural changes that would require the UO to set up two or three new college dean’s offices. Given the widely held conviction that we do not have resources to create something better than what we have, the group concluded that this is not the time to make large, structural changes. Even those most interested in change do not want to change unless we are sure we’re creating something better and have the resources to realize its benefits.

Most agree that the cost of restructuring CAS would be prohibitive and that we should invest any money there might be for this project in improving CAS. This sentiment deepened over the course of our deliberations by news of the budget cuts and the Provost stepping down. CAS TF discussions tended toward improving rather than restructuring CAS, a focus that fell within the broad charge from the President and Provost. To aid communication and facilitate reference, we enumerate our principal conclusions. Since specific suggestions made by large, visible committees may become unwanted and unwarranted benchmarks, we restrict our conclusions to summary assessments and the attendant lessons drawn (with one exception, item 1 below).

1. We recommend seating a small vision committee tasked with addressing the President’s concern about the establishment and communication of division- and college-level visions raised during the lunch meeting in March. It is understood that this committee will seek input from all CAS stakeholders.

2. CAS is anomalous relative to most other public research universities only because UO lacks medical/engineering/agricultural schools.

3. There is broad and strong resistance to large-scale restructuring, including “splitting up CAS.”

4. There is considerable evidence that success is not closely related to structure–any structure can work. Leadership quality, administrative roles, and internal structures may be primary to a college’s success.

5. There is broad and strong support for the recommendation that if CAS is to be split or otherwise significantly restructured, then the reasons must be clearly articulated; further, in case of restructuring, it should be evident that the benefits outweigh the substantial costs, which include transition costs and uncertainty.

6. There is broad and strong support for a renewed emphasis on liberal arts education and scholarship as central to the university’s mission.

7. There is broad and strong support for a renewed emphasis on interdisciplinary education and scholarship.

8. Cooperation, rather than competition, among deans should be fostered–a best practice that CAS already enjoys and should be extended to the deans of the other schools and colleges. 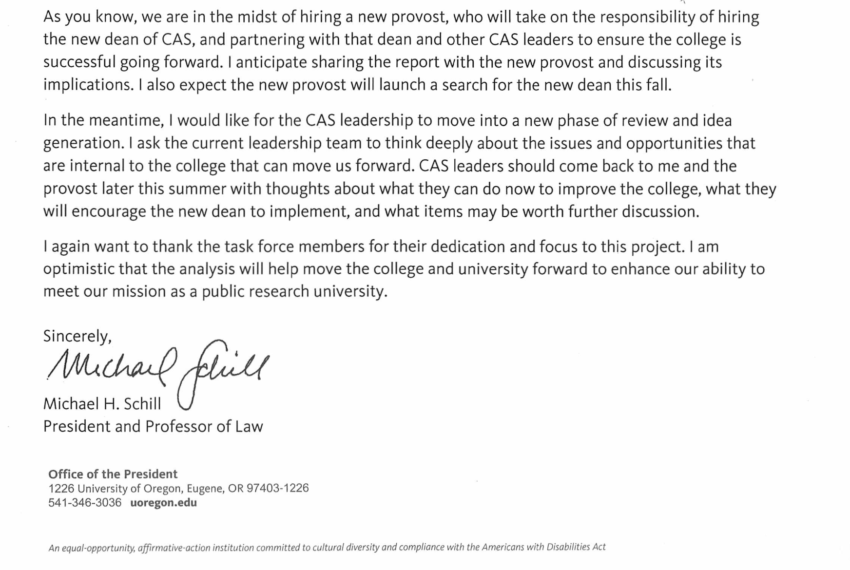