The most recent comprehensive report on Oregon’s Public Employees Retirement Plans is “PERS by the numbers“. The numbers are a bit out of date, but the basics are clear.

1) PERS is no longer the gravy train it once was for state employees. Current retirees with 30 years service retire with 51% of their final pay: 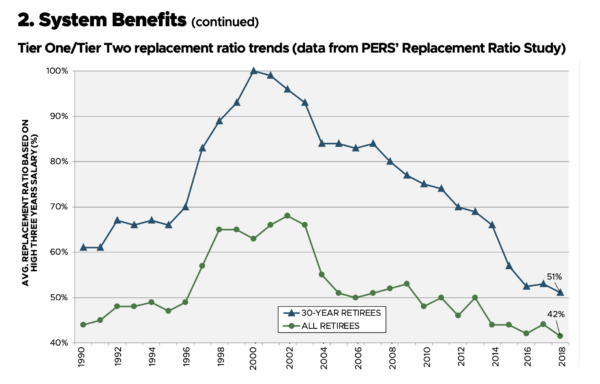 2) As of March 2020, PERS had a reserve of about $75B invested in private equity, stocks, bonds, real estate etc. A lucrative business for Wall Street.

3) PERS is paying out about $4.6B in benefits a year to retirees:

4) In 2018, state agencies, municipalities, school districts, universities and community colleges, fire districts, etc paid $2.4B into PERS. The average rate currently is about 30% of payroll – a huge expense. (About 2/3 of employer contributions go to building up the PERS reserve. PERS investments paid for the rest of retiree benefits. From PERS by the numbers.)

5) The state’s revenue forecast will not be out until May 20th, but it’s not going to be good, and Governor Brown is expected to call for about $3B in spending cuts for the 2 -year biennium budget that began July 1 2019. According to OPB, these cuts might include such things as:

… The Oregon Department of Education is mulling cuts of nearly $730 million to its $8.6 billion general fund budget, including a $636 million reduction in funding to school districts around the state.

6) Instead, Oregon could simply declare a holiday on state payments into the PERS reserve fund. PERS payments to current retirees would come out of the reserve fund, which is among the largest in the country in comparison to the actuarial liabilities.

A 50% holiday would almost be enough to eliminate the need for cuts – but why think small? Let’s just stop paying in for a while. $75B is a hell of a rainy-day reserve, and it’s really coming down out there.

7) But won’t future future taxpayers have to foot the bill – or future state employees, in the form of lower wages? Yes, so long as PERS insists on getting to a 100% fully funded plan, instead of running on a pay-as-you go basis like, say, Social Security and most other states are doing on a de-facto basis.

But even if they do have to pay to get the Wall Street reserve back up to 100%, those future people will be a lot better off if the state still has functioning schools, universities, and, I suppose, prisons. And Oregon’s economy will be better off with state employees who are working, and spending their paychecks at local businesses.

Wall Street doesn’t need this money like Oregon does.