There is no question we are living in a moment when our nation is painfully coming to grips with the reality of systemic racism that has been woven into the fabric of our society for generations. Racism exists despite the bloody battles of the Civil War, despite protections guaranteed by the Fourteenth and Fifteenth amendments, despite the hard-fought victories of the Civil Rights movement, and despite more recent efforts of individuals and institutions to consciously promote diversity and inclusion. Events of the last few weeks have sadly demonstrated that racists in our country still kill Black people and other people of color. Racism still endures within our nation’s power structure, and racism still keeps Black, Indigenous, Latinx, and Asian people from equal access to health care, education, justice, economic prosperity, and so much more. People are angry, people are hurt, people are enraged.

On Saturday, what some consider to be symbols of racism and oppression on our campus were targeted by an anonymous group of protestors. Both the Pioneer and Pioneer Mother statues were torn from their pedestals and vandalized in dramatic fashion. While I strongly believe in the power of peaceful protest and the right to free expression and dissent, I condemn these acts of destruction. What happened Saturday evening was unacceptable.

Last week I told the University Senate that the institution would move forward with a process of determining whether the Pioneer statues—as well as other historic monuments and artwork on campus that may be viewed as symbols of oppression—should be taken down. I regret that we will no longer have the opportunity for that type of deliberative and inclusive process. Nevertheless, we need to move forward as a community.

One of the long-standing challenges with the Pioneer statues was their lack of contextualization and materials to fully explain their complicated meaning—both good and bad. Therefore, I will ask the Committee on Recognizing Our Diverse History to work with our museums to explore permanent installations or other opportunities to exhibit the statues in a manner that places them in appropriate historical context. In the meantime, the statues have both been put into storage. Neither statue will go back to their previous places of prominence on campus. [emphasis added]

These are incredibly difficult times. Removing or relocating a statue or a piece of art does not change the need for the hard work of confronting racism that is ahead of us as a nation, a state, and a university. I honestly do not know where exactly that will lead us, but I have to believe that something positive will come from all of this pain. As an institution, we will continue to listen, seek understanding, and find meaningful ways to recognize and strengthen communities of color. We will redouble our efforts and explore new ways to support diversity and inclusion among students, faculty, and staff and bolster ally-ship on the University of Oregon campus. We must and we will.

… 1.11 WHEREAS the UO campus still prominently displays signs and monuments that glorify white colonization and domination, while failing to do enough to honor the work and sacrifices made for justice and equity; and

… 2.3 BE IT FINALLY RESOLVED that we request that the University President in consultation with the Senate President and student leaders, convene an ad hoc task force comprised of members from all campus constituencies to discuss, identify and propose campus education about the UO’s history as it relates to diversity and inclusivity, as well as recommend changes, modifications and additions to spaces and monuments which still narrate the campus along the lines of white supremacist mythologies.

Note that this task force was not charged with considering whether or not to *remove* the Pioneer Mother and Father – just with how they might be modified, with such things as interpretive plaques etc. Schill would not appoint a presidential task force if it was allowed to consider removal of the statues, because of virulent opposition from some wealthy alumni. I encouraged the Senate to go along with the weak charge above, seeing no point to a Senate-only committee that would be actively opposed by President Schill. In short, I was a coward.

Even the modest goal of adding interpretive information about the statues was never done, as will surprise no one who has tried to get a committee to do anything, and which I’m sure was not a surprise to Schill – who made no effort to push along his committee’s work. Apparently they never even wrote a report. Now President Schill is – you guessed it – establishing a new committee to spread the blame for whatever happens next. It will be interesting to see who will be willing to join such a committee.

For a pretty clear explanation of the racism behind the statues, or at least the Pioneer Father, read the paper by UO History grad student Marc James Carpenter for the Oregon Historical Society, here. The abstract: 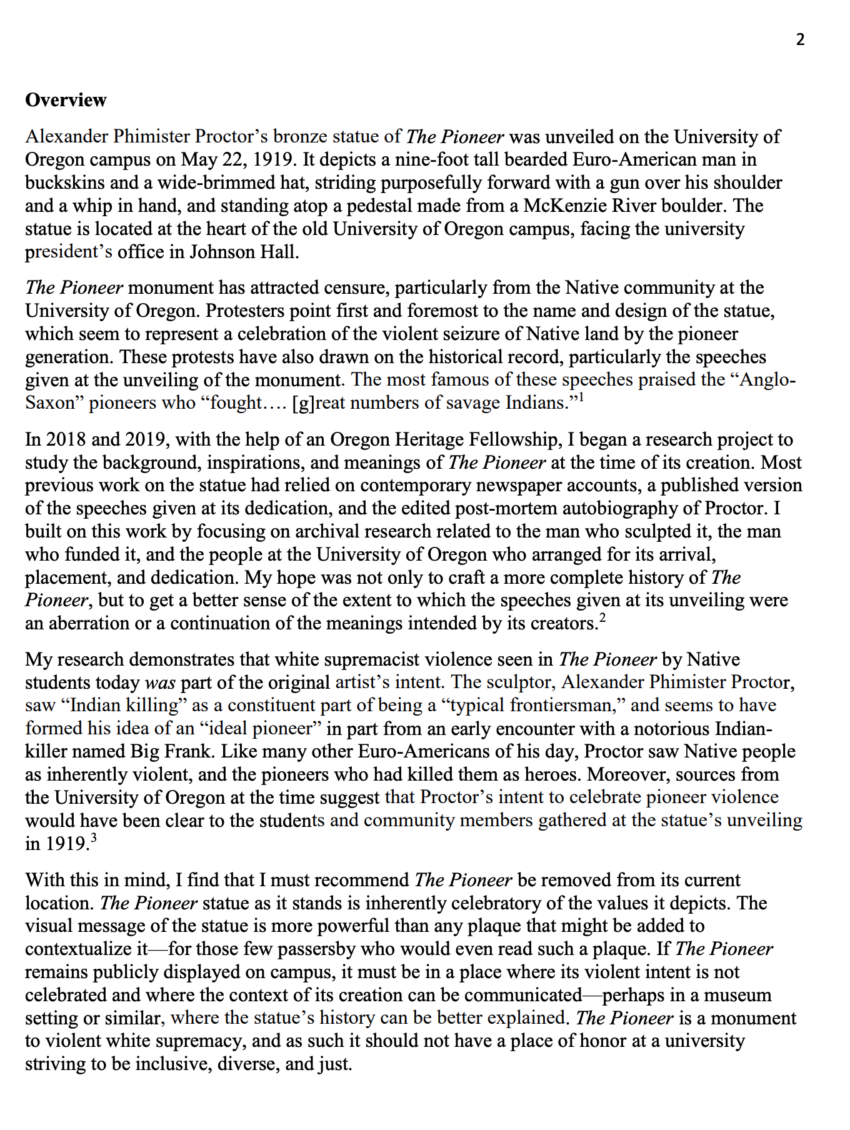