UNC wanted *athletes* to pay for the NCAA infractions

7/11/2012: North Carolina newspapers have obtained some heavily redacted documents from the recent NCAA Infractions Committee investigation of its various football misdeeds, along with the BSK law firm’s $60,000 in invoices. (Oregon reporters haven’t obtained any of these for the UO case since Bob Berdahl rescinded Lariviere’s public records policies.) You can read the official NCAA report here – and yes, UO’s own NCAA Faculty Athletics Representative Jim O’Fallon is one of the officious signatories. We pay him to do the NCAA cartel’s dirty work.

One amazing part of the new documents is the information that, in an effort to protect the football program and have NCAA let the players keep playing for free, the university proposed making the “student athletes” pay for the violations! (p93) It’s not enough that the cartel keeps the athlete’s pay at zero – now they have to pay NCAA penalties too?

The NCAA report does not say whether or not the NCAA took UNC up on their generous offer. It all makes me wonder what is going on with the Willie Lyles NCAA violation, and what sort of self imposed penalties UO is proposing – and who is going to end up paying for them.

Meanwhile, one of the UNC players is suing the NCAA for declaring him ineligible – this could get interesting. 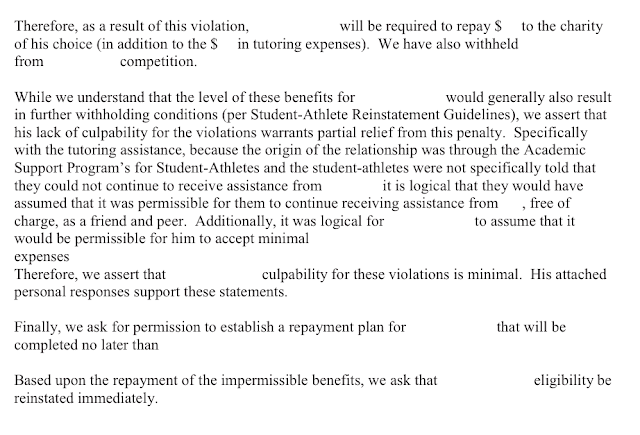