Back in 2010 or so Dave Frohnmayer and HLGR filed an ethics complaint on behalf of the county’s general counsel Mark Pilliod against newly elected DA Patrick Flaherty. After a year or so of digging the bar the bar rejected Frohnmayer and Gary’s complaint, finding Flaherty had not violated any bar ethics rules. HLGR picked up about $55K in billable hours from Deschutes county taxpayers anyway.

Around the same time the bar also dismissed the ethics complaint Frohnmayer and Gary had filed against Associate AG Sean Riddell over his role in the DOJ’s investigation of how Kitzhaber’s girlfriend Cylvia Hayes got an energy consulting contract. Frohnmayer and Gary had accused Riddell of lying, bullying, and a variety of other bad things. Nigel Jaquiss of the Willamette Week has the story, which makes everyone involved look like idiots.

Meanwhile Flaherty’s wife Valerie Wright filed a retaliatory ethics complaint against Frohnmayer and Gary. After a year or two the bar finally rejected her last appeal this April. Letter below, final doc dump here, way too much more here. 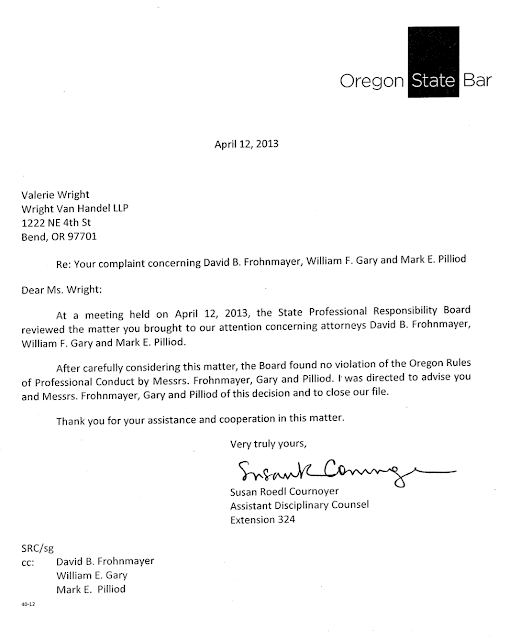 One Response to Ethics charges against Frohnmayer et al dismissed