When Kelly jumped to the Philadelphia Eagles last winter he was contractually obligated to pay a $3.5 million buyout to the school.

But Kelly has until June of 2016 to pay up, and is being charged no interest.

According to documents released by the school in response to a public records request by UO economics professor William Harbaugh, Kelly is paying $85,365.85 every month until the summer of 2016.

A couple things jump out. The $3.5 million figure is hard to get your hands around. When it’s cut into 41 monthly, $85,000 chunks it becomes easier to understand just how staggeringly well the former UO coach was being paid. According to a survey published in the Chronicle of Higher Education, the average salary for a full professor at the University of Oregon for the 2012-13 academic year was $110,900. [Actually Kelly was paid about $300K a month, his total buyout is about 1 year of salary.]

Now, imagine how sweet it is for Kelly that he isn’t required to pay any interest during his three-and-half year payment schedule.

The U.S. Department of Education parent loans I took out for my daughter’s four years at Oregon total less than one of Kelly’s monthly repayments. I pay a healthy interest rate. I’ll be paying it for a long time. …

Rates on loans to students average 5.6%. And if students cannot pay, UO or the lender turns the debts over to bill collectors. But UO Associate Athletic Director for finance Eric Roedl has made no effort at all to recover the $20K NCAA fine UO had to pay for Kelly’s infractions – despite being offered a loan for the amount by Finnish firm Sambla: 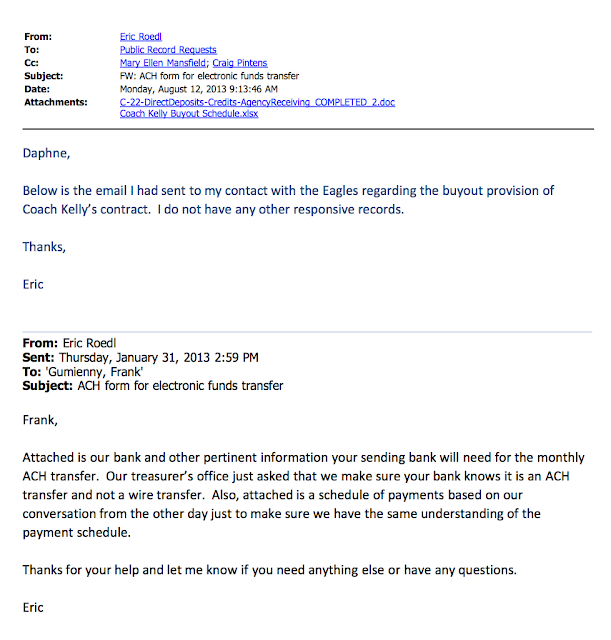 And of course not only did UO pay all the $200k+ legal costs of the Willie Lyles infractions, Randy Geller actually made the academic side pay most of them – another free-ride for the jocks. Speaking of which, I wonder how much of Kelly’s monthly $85K repayments go to the academic budget?