Diane Dietz has the story in the RG. Good to see Roger Thompson’s admissions office is doing more than organizing sham events to cover for our administrators’ bowl game junkets. Speaking of which, President Gottfredson’s office is now denying they have any public records showing which UO administrators and spouses got  “paid work related travel” to the San Antonio Bowl:

Sure. Last year’s Fiesta Bowl memo is here. I wonder why JH is so secretive about this year’s list?

1/6/2014: Ducks to lose money on Alamo Bowl after administrator junkets?
Now 3 weeks, and still no memo from the public records office. But Troy Brynelson has a great article in the ODE about our administration’s tortured efforts to justify their Alamo Bowl junkets as a worthwhile admissions recruiting trip, here.

12/30/13: More than two weeks since I made this request, and UO is still hiding the memo showing which administrators got Alamo bowl junkets.

For the Alamo Bowl, which pays nearly $3.2 million to the conference, the conference pays a school $1.2 million, plus up to 500 charter seats and the ticket subsidy.

“The reimbursement usually does not cover the entire bowl game expense amount,” the UW’s Sasaki said.

True, but each university also controls the size of its travel party to a bowl game — a factor that largely determines whether it financially wins, loses or breaks even.

Then there’s the $50K bonus we have to pay Rob Mullens.

Or maybe they just gave them a different name. On Dec 11 I made this public records request, after hearing rumors that President Gottfredson had cut back on the number of UO administrators and spouses getting all-expense-paid trips to this year’s bowl game:

12/11/2013: This is a public records request for a copy of any email, memos, or similar announcing which UO employees will get paid junkets to this year’s “Valero Alamo Bowl”. I ask for a fee-waiver on the basis of public interest.

These trips are a potential conflict of interest for UO administrators like VPFA Jamie Moffitt, who must make tough decisions about cutting athletics subsidies after getting a sweet free vacation from the Ducks. Just to make sure the public records office knew what I was asking for, I followed up with a link to last year’s announcement – which took a month or so to obtain, if memory serves me:

12/11/2013: if you need any clarification on this PR request about junkets, last year’s announcement from President Gottfredson is here: 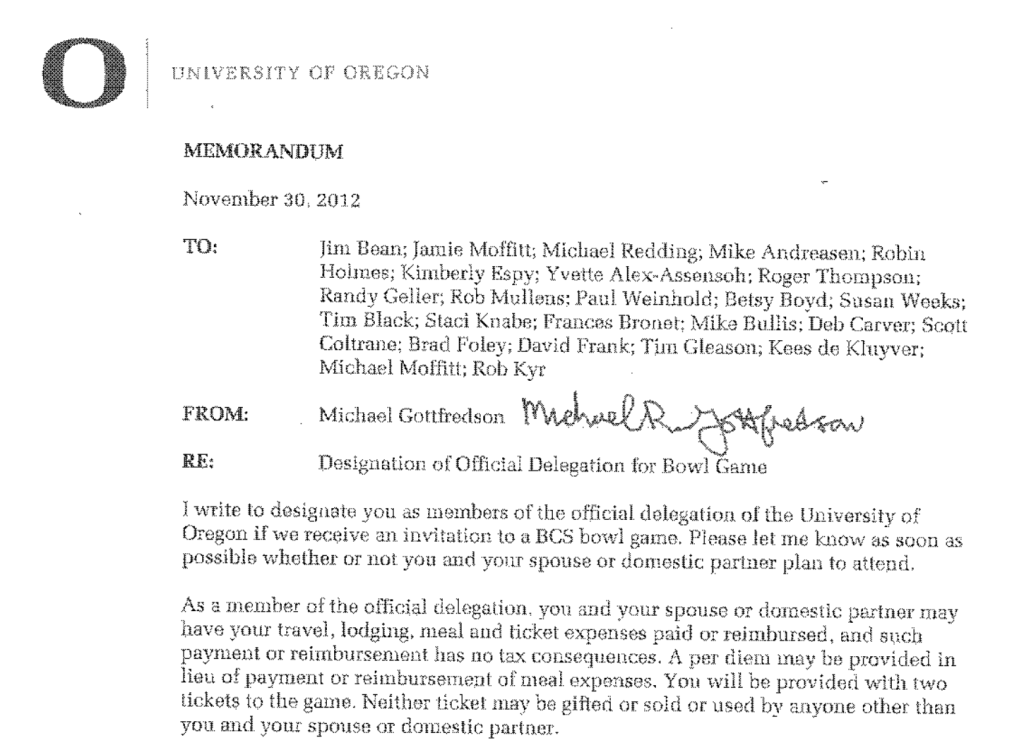 Eight days later, the Public Records Office sent me this:

12/19/2013: The University does not possess documents responsive to your request for “a copy of any email, memos, or similar announcing which UO employees will get paid junkets to this year’s ‘Valero Alamo Bowl'”, made 12/13/2013.

The office considers this to be fully responsive to your request, and will now close your matter.  Thank you for contacting the office with your request.

Really? No junkets? Surely last year’s vague threats of IRS audits can’t have saved UO that much money so quickly! So I followed up with a request for an explanation, and got this back:

Ah, so they don’t like the word “junket”. Let’s revise that request and see what happens:

So “work related travel” seems to be the preferred nomenclature. Here’s UO’s form letter response. But I’m still waiting for them to provide the 2013 Alamo Bowl memo and list of junketeers:

12/24/2013: The University of Oregon, Office of Public Records has received your public records request for copy of any email, memos, or similar announcing which UO employees will get paid work related travel to this year’s ‘Valero Alamo Bowl’ on 12/23/2013, attached.  The university is uncertain whether it possesses the records you have requested.  However, the university will search for the records and make a response to your request as soon as practicable.

The cost of time for each employee is calculated by multiplying the employee’s hourly wage calculation (including benefits expenses) by the hours or portions thereof necessary to locate, gather, summarize, compile, tailor, review, redact, segregate, certify or attend the inspection of the public records requested.