4/26/2014: That would be the University of Missouri, story here. Meanwhile here at UO, our administration is still trying to write a two paragraph mission statement.

Interestingly, the UM plan is focused on increasing incentives to create intellectual property, by making it easier for faculty to own patents and start businesses. Just the sort of thing that President Gottfredson and Sharon Rudnick tried to crush here at UO during the faculty union negotiations. Remember when Randy Geller wanted the right to vet all faculty consulting?

4/24/2014: With UO research in disarray, Gottfredson jets off for AAU meeting.

This trip is not going to be as much fun as January’s Alamo Bowl junket.

Last year President Gottfredson told our academic accreditors that UO’s aspiration was to rise to the top half of the AAU publics. The truth is that we’ll be very lucky if we can even stay in the AAU. Their “membership indicators” are posted here, and it’s all about federal research money. Sports gets zero weight.

UO research spending beat that by only $2.7M: 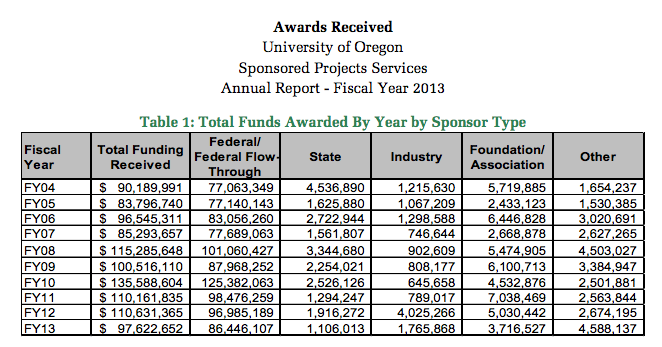 Yes, while the UO Foundation funneled $25M in tax-free donations to Duck athletics, and spent another ~$6M on their own offices and salaries, only $2.7M went to fund UO research. (Note: the athletic and research numbers are for current expenditures, and exclude buildings like LISB and the Football Palace.)

Last spring the UO Senate handed President Gottfredson a golden opportunity to finally end some of the athletic subsidies and send the money back to the academic side:

2.1 BE IT HEREBY MOVED that the UO Senate requests that the UO President requires the UO Athletic Department to pay from its budget the full cost of providing tutoring and academic support for student-athletes, beginning in FY 2013-14;

2.2 BE IT FURTHER MOVED that the UO Senate requests that the UO President requires the UO Athletic Department to pay from its budget the full cost of the bonds used to purchase the Knight Arena land, beginning in FY 2013-14;

But Gottfredson blew this faculty plea off. The athletic subsidies – about $5M a year – continue.

Then there’s the leadership problem. The faculty just chased off the disastrous VP for Research Kimberly Espy. It took a year and a half – two formal reviews, research institutes gutted, PI’s have left, or are on their way out. While Gottfredson defended Espy every step of the way, he must have seen this coming for at least a year. Nope, he still hasn’t even found an interim replacement.

In a nutshell, staying in the AAU is all about academic research. But President Gottfredson is taking money from the academic side and spending it on sports. We currently don’t even have a VP for Research. But he says he wants UO to be a top tier AAU research university. Sure. Have a good time explaining this all to your peers at the AAU meeting, President Gottfredson.