The next legal step for the newspaper will be a lawsuit in Lane County Circuit Court, said Wendy Baker, the newspaper’s general counsel.

“The rejection of our appeal leaves us with no option but to file a lawsuit against the university. Oregon Public Records law exists to preclude this kind of secrecy among our public servants,” she said.

Andy Greif has more in the Oregonian.

No word yet on whether or not the NY Times will join in, or on how much of UO’s student tuition money President Mike Gottfredson is willing to pay to Dave Frohnmayer and HLGR, to help him continue to hide the documents that explain his administration’s response to the March 8-9 rape allegations.

The opinion by DA Alex Gardner and Deputy DA Patty Perlow is here, along with the 2011 Kroger/Leith opinion they cite. My understanding is that neither opinion has any weight in court. Normal procedure is for the DA to get the unredacted documents and examine them to see if the redactions are justified. It sounds like Perlow really did not want to do that here: 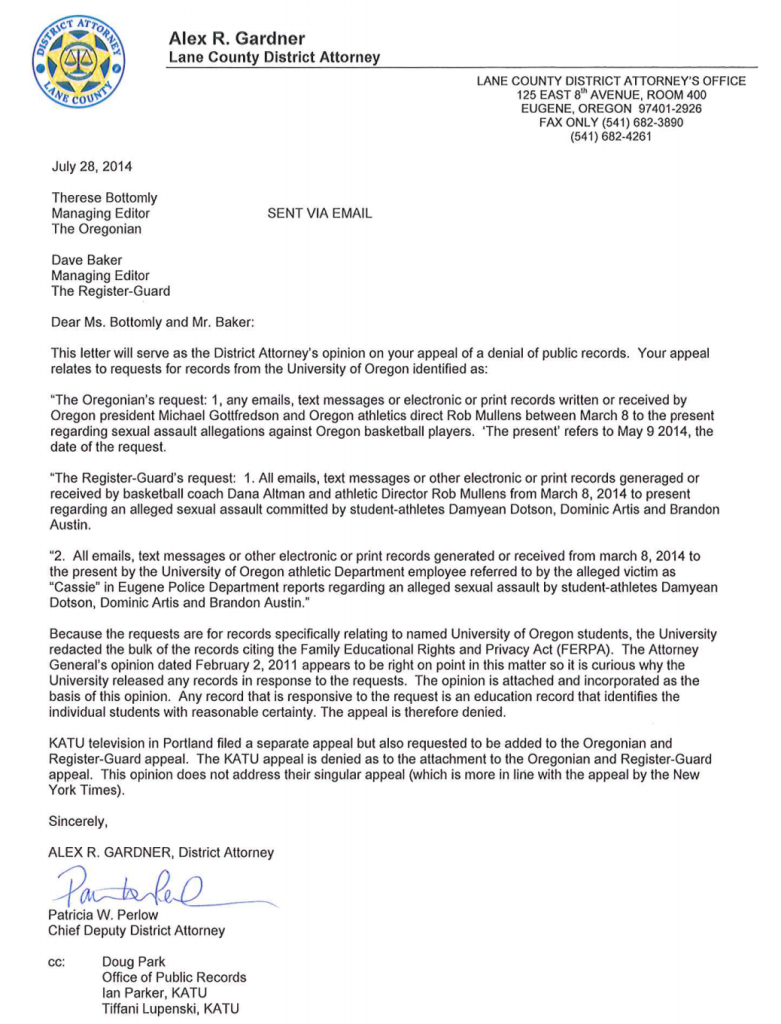 It’s a stretch, given that UO specifically color-coded many redactions not on FERPA grounds, but on a claim of attorney-client privilege (typically granted only for advice, not facts), or because they included “frank discussions” which might frighten the public. A statement from US Secretary of Education Arne Duncan on universities abuse of FERPA to hide documents is here.

In other public records news, the DA’s office has also gone with President Gottfredson’s claim that UO lawyers Doug Park, Samantha Hill, and John Salmon III are “faculty” and therefore do not have to release their resumes. Bizarre and secretive.

7/23/2014: The New York Times is not impressed by Gottfredson’s “sanitized” timeline and redactions

Chief Deputy DA Patty Perlow is handling this petition, for unredacted copies of the emails showing the UO administration’s efforts to cover up the March 8-9 rape allegations. There is another petition from the RG and Oregonian. Perlow has not yet ruled, but in response to a PR request she has sent me all the NYT petitions and UO’s responses. (No charge. For comparison, UO PR boss Dave Hubin wants $94.61 just to show the emails laying out the agenda and so on for Gottfredson’s “External Review Panel”.)

Hilariously, UO’s Interim General Counsel Doug Park is still refusing to sign his name to the responses he has written for UO. Or maybe he’s got a ghost writer, perhaps UO General Counsel Emerita Melinda Grier? In any case, the Times is not impressed by the UO’s arguments or President Gottfredson’s “sanitized” timeline. Their final response to UO begins: 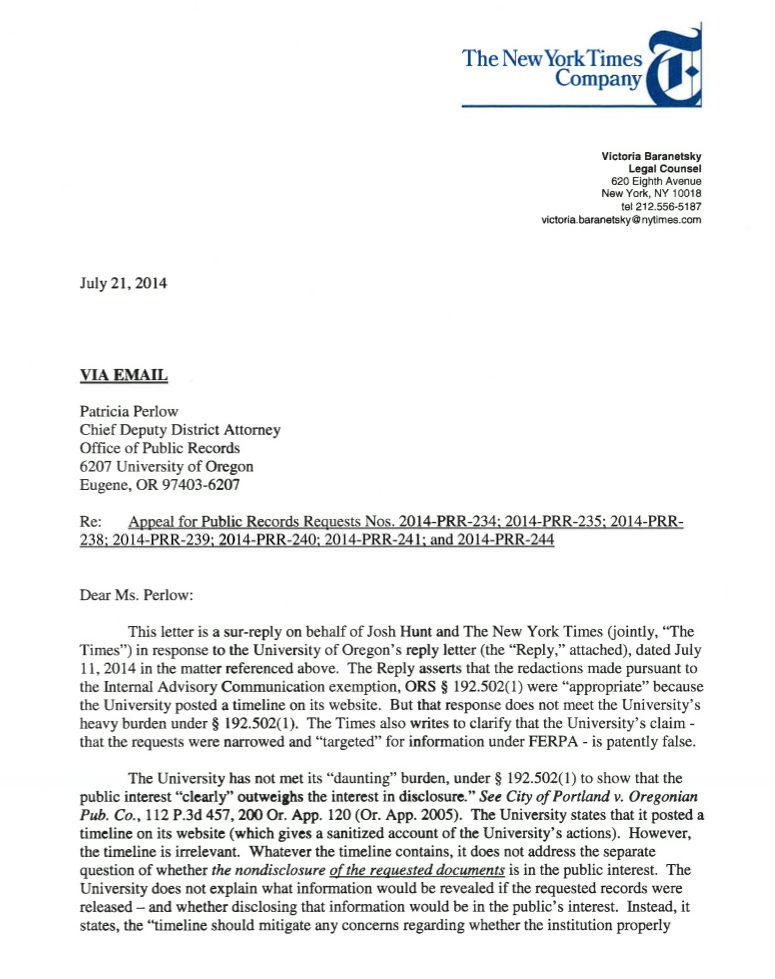 The RG and Oregonian have also appealed UO’s redactions to the DA. Documents on that should be available soon, at the moment I just have the petition.