8/3/2014 update: On Friday UO’s AA Director Penny Daugherty posted UO’s 2014-15 Affirmative Action Plan. Only a month late, which by her standards is not bad. Some years she doesn’t bother to file it at all. The new PDF is here. The stats and hiring goals are at the back. Please, don’t call them quotas, but the UO administration will give your department $90K if you can persuade a new hire to check the right box on Ms Daugherty’s race card, here:

It doesn’t look like Gottfredson has got around to signing off on her latest plan yet, although his PR flacks at Around the O have just announced that his “President’s Diversity Advisory Community Council” will meet Aug 7. It’s got 21 members, but they won’t list any names. Will that be a public meeting? Dream on.

Gottfredson could establish a little credibility on the diversity issue if he replaced Ms Daugherty. But instead it looks like he’s going to keep on backdating documents for her:

That’s the rumor, but instead she’ll probably get another raise. I wonder if she’s going to get UO’s Affirmative Action Plan prepared on time this year? She’s failed to do that almost every year since she was hired, which puts UO out of compliance with federal law. Sometimes she just blows it off entirely. Last year she was late again, though you wouldn’t catch that from President Gottfredson’s signature on it, unless you happened to know he wasn’t hired until August 1, 2012: 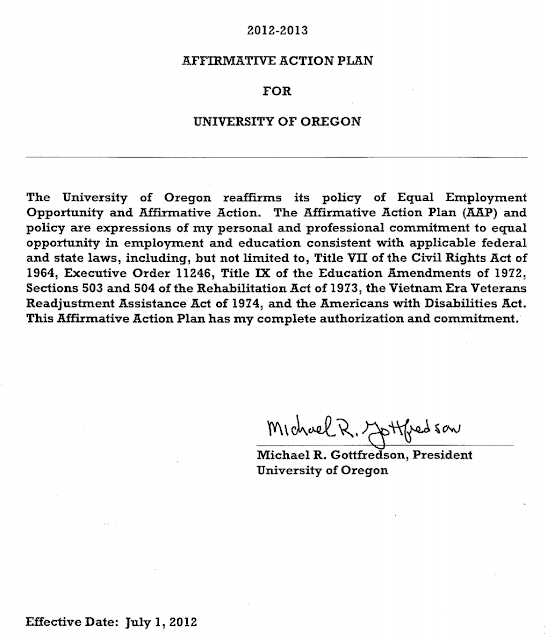 2 Responses to Gottfredson to backdate another Affirmative Action Plan