Live-blog from Senate: Let’s call this the “Wizard of Oz” meeting

12/4/2014 update: Paid UO PR flack Jennifer Winters has now posted the admin spin for Wednesday’s Senate meeting on “Around the 0”, if you care enough to google it.

Short version: Coltrane got raked over the coals again for his administration’s secretive “Academic Continuity Plan”. He added to the fire by threatening, not very subtlely, to discipline faculty who did not submit grades by Dec 19. The Senate began the process of restoring trust and confidence in UO’s academic integrity by taking responsibility for this away from VP’s Blandy and Altmann.

The Senate approved new courses, and agreed to set up former provost Jim Bean with a $250K sinecure running a new “Sports Product Design” MS degree program, which now goes to the HECC for consideration. We also approved a permanent Committee on Sexual and Gender-Based Violence, and worked through and approved the last of the revisions to the Student Conduct code that VP Robin Holmes had neglected for years. All in all a very productive meeting.

12/3/2014 update: Official Senate Agenda for the 3PM Wed meeting is here. Coltrane will speak and get asked questions about the strike, etc. I wouldn’t be surprised if the Senate also took further action on the strike. It will be an interesting and important meeting. I’ll try and live-blog a little:

Coltrane claims that the confidential Academic Continuity Plan was developed openly, after consultation with the faculty. Expects to receive the report of the secretive “Presidential Review Panel on the rape allegations” soon and will make it public. Will pay the AAU for its proprietary $85K campus climate survey, plus another one from UO researchers. Wanted to delay,but AAU put the screws to him. Chuck Triplett has recommended that the UO Board drop 87 old OUS policies on Dec 11, even though the Policy Review Committee(?) is not yet in place. What’s the hurry?

Lots of questions, Coltrane does his best to answer, but sticks to party line on academic standards and the AAU. His “We’re all in this together” line gets some derisive (but in a respectful way) laughs.

Undergrad: “What do you suggest we do as we watch our grades teeter?”

Philosopher Q: “So it’s like in the Wizard of Oz, where the scarecrow wants a brain (education), but gets a diploma (grade) instead?” A: …

Kyr: Lots of work to be done! There will be more meetings! You will attend! You will like it!

Psaki moves to suspend the rules to present a resolution calling for establishment of a “Task Force on Academic Integrity” to look into what went wrong with the administration’s confidential Academic Continuity planning, and replace it with a plan developed by the Senate, in accordance with our legal and traditional rights and obligations. Dreiling introduces the motion, “to restore trust and confidence”.

Psaki speaks to it as a positive, motion that could lead to some healing between faculty and admins.

Joe Lowndes presents, describes rigorous process of revisions and reviews that Bean’s proposal was subject to by the Graduate Council, which in the end voted unanimously in favor. Senate also passes unanimously.

Sorry, no live-blog on these, Bonine’s motions are thoroughly annotated, read them. The Senate passed the all today, with considerable discussion on some:

The Senate then heard a brief statement from GTFF VP for organizing Jonathan Turbin, who noted that GTFF President Joe Henry was in DC and would be meeting with Pete Defazio to discuss the strike. Turbin expressed his appreciation of the Senate’s efforts to maintain academic integrity, and his desire to have the administration agree to a fair contract “tonight or tomorrow” so that he could get back to work helping his undergraduates prepare for finals week.

The Senate applauded enthusiastically, and then adjourned at 5:15, with the work below left for a future meeting. Many members joined the GTFF rally outside.

12/1/2012: On Nov 19th the Senate voted overwhelming to call the administration out on its secret plans to degrade academic quality in case of a GTF strike, here: http://senate.uoregon.edu/content/opposition-efforts-academic-affairs-dilute-and-degrade-academic-standards-event-graduate:

2.1 BE IT THEREFORE MOVED that the Senate, as the legitimate representative body of the faculty, reject on behalf of the faculty, this confidential memo, the secret process by which it was written, and the dilution and degradation of academic standards it suggests;

2.2 And BE IT FURTHERMORE MOVED that the Senate directs Interim President Scott Coltrane and his administrators to work openly, publicly, and transparently with the UO Faculty, through the UO Senate in accordance with the UO Constitution, to determine how the University will maintain its academic standards in the event of a strike by the GTFF.

Last night Senate President Kyr sent this email to the Senate, saying that Coltrane was unresponsive to the legislation:

RE: Legislation regarding Academic Standards

I am writing to give you an update on the the legislation that was passed by the University Senate regarding academic standards and the impending strike.

On the Friday, November 21, I had a phone conference with President Coltrane regarding the legislation, asking him to make as swift a response as possible. In compliance with the legislation, I reiterated that the Senate and its committees were ready to work with the administration, and I added that we would be willing to begin that work even before receiving a formal response. As you know, we are under incredible time pressure given the possibility of a GTFF strike and I directly communicated the commitment and the determination of the Senate to uphold academic standards, as maintained in the approved legislation.

I will contact the Senate as soon as I have received a response from President Coltrane regarding the legislation.

All the best,
Rob

The next Senate meeting is this Wednesday, Dec 3. While Coltrane has been fading fast on the academic standards, his admins have pulled out the defibrillator for Jim Bean’s Sports Product Design MS proposal. At the last Senate meeting Senate meeting Board Chair Chuck Lillis told the Senate in no uncertain terms that there would be serious consequences to rejecting any academic programs that UO’s new Board likes:

And they like sports! So I would like to be the first to express my support for Jim Bean’s wonderful program. My only question is why this sports product program is coming to the Senate so late – after many potential masters students have already made plans for next fall?

Lillis tried to implicitly blame the Senate and its committees, but apparently the weak link has been our feckless former provost and current Associate Business School Dean Jim Bean, who has been paid $250K a year for two years to work on this proposal.

By accounts from three different LCB insiders, and the Senate Graduate Council, the original proposal was, shall we say, “Not Jim Bean’s best work”. He eventually revised it, and they approved it this spring. The Senate could easily have approved it then, or certainly by September. But no one brought it forward. Why not?

As it turns out, Bean’s been padding that UO salary – which no longer covers his beamer payments – with some outside consulting gigs, including a $500K one for FSU-FAMU, and he’s had a busy fall. Too busy to do his UO job. Here’s one of his many consulting invoices: 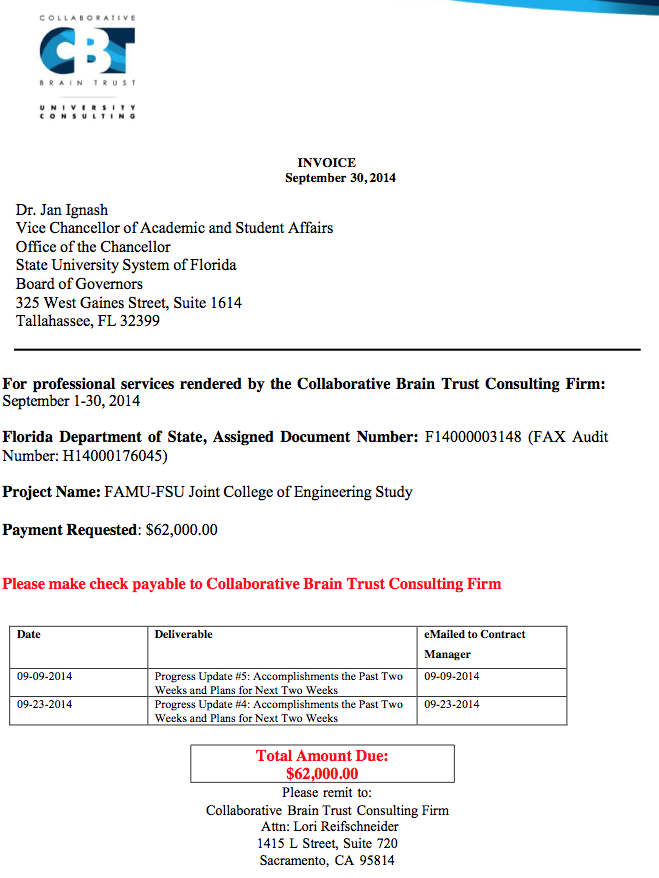 In fact it’s not even clear Bean will show to defend his sports product program in the Senate on Dec 3, given his prior commitments: 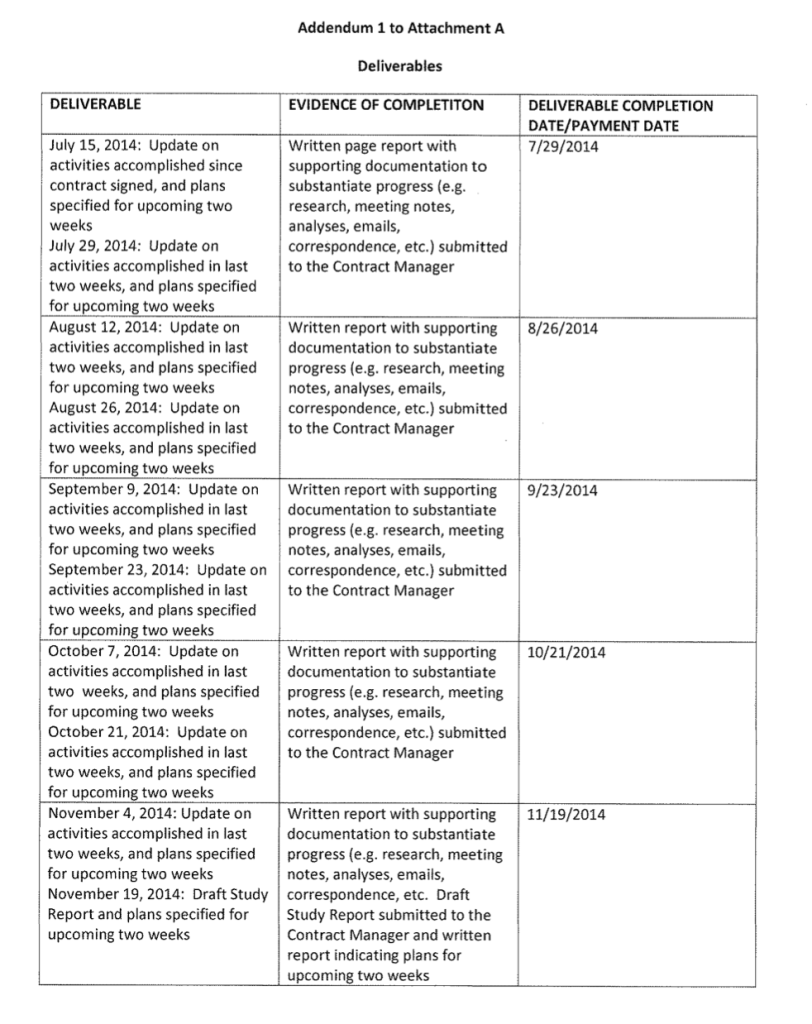 But according to his Sports Product Design Proposal he’s going to “return to the classroom” and make up for that sabbatical, just as soon as he can. Right: 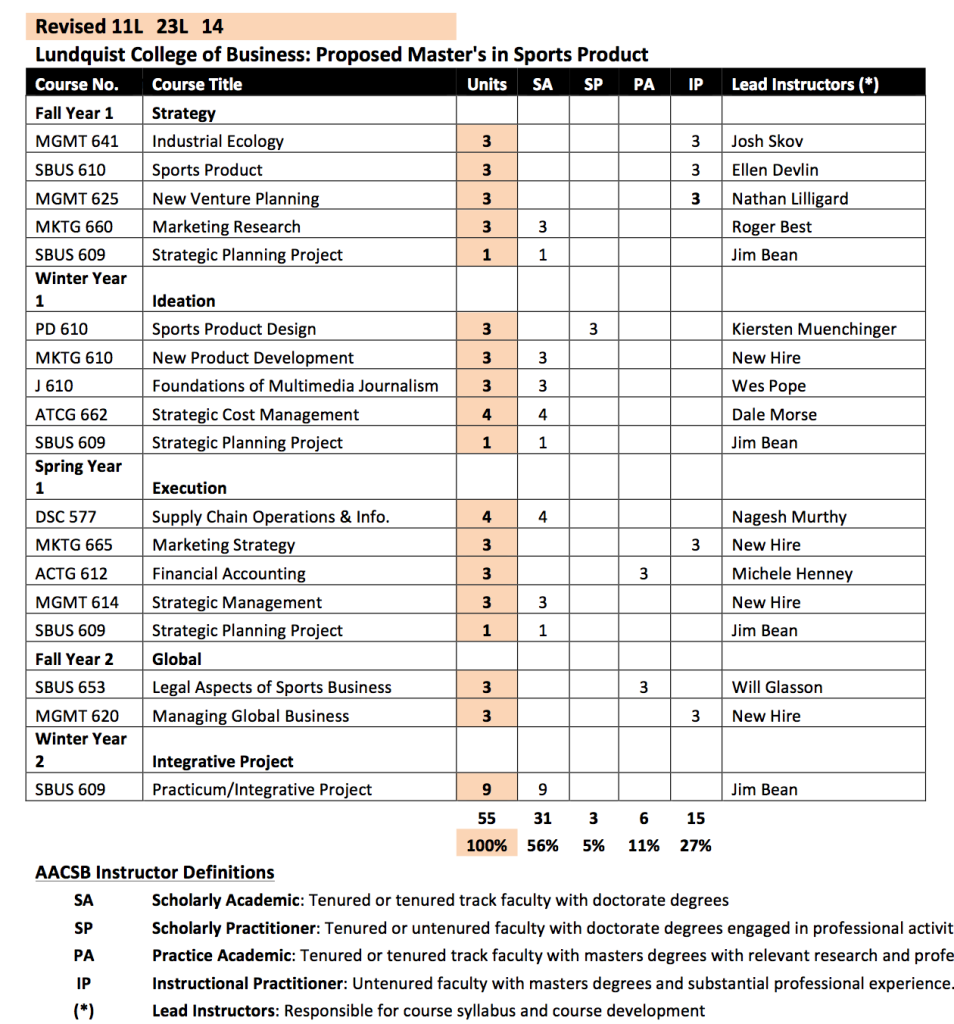 21 Responses to Live-blog from Senate: Let’s call this the “Wizard of Oz” meeting