The Foundation for Individual Rights in Education has the story, here:

According to the declaration of former Chicago State Vice President for Enrollment Management LaShondra Peebles, Watson was determined to silence Beverly by shutting down the blog, CSU Faculty Voice, which Beverly had founded. Contributors routinely posted documents that supported their allegations of mismanagement by the administration.

The Chicago Tribune report is here:

The president of Chicago State University tried to pressure a high-level administrator to file false claims of sexual harassment against an outspoken professor to help the college try to silence him, according to court documents filed Thursday as part of an ongoing lawsuit. In a sworn statement, LaShondra Peebles, the college’s former interim vice president of enrollment and student affairs, said before she was fired that President Wayne Watson pushed her to accuse Phillip Beverly of sexual harassment, though Peebles said she was never harassed.

Beverly contributes to the blog CSU Faculty Voice, which has been critical of Watson and his policies. Beverly and professor Robert Bionaz have sued the university in federal court for allegedly attempting to shut down their blog.

From Ms Peebles’s statement to the court: 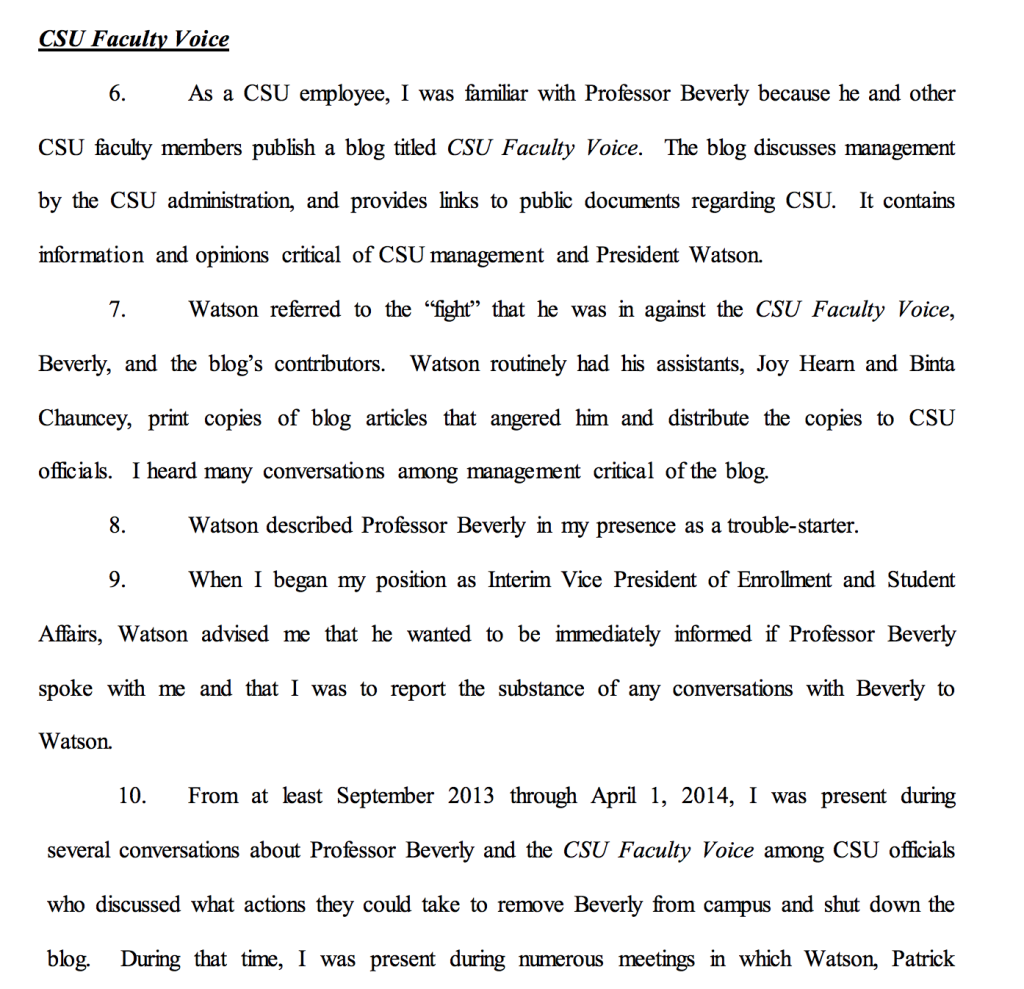 This sort of thing would never happen at UO, right? Right?

Speaking of UO Interim GC Doug Park, there’s still no news on the search to replace him with a competent general counsel.

Applications were due Feb 5 for full consideration, campus interviews were supposed to take place in March, and a permanent replacement for Park is supposed to be in the job in April. We hope.

Park’s fingerprints are all over UO’s redoubled efforts to hide public records, and the decisions to sue the survivor of the alleged basketball gang rape, and persuade Counseling Center Director Shelly Kerr to give her confidential counseling records to the GC, so they could scan them into the office’s digital archives. (Interim Provost Frances Bronet made Park give the originals back, it’s not clear what happened to the digital copies.)

I had to make a public records request and threaten a petition to the DA, just to find out who was on the search committee for a new GC. Eventually Coltrane posted this: