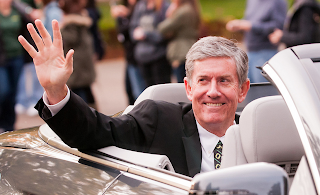 That was the opening offer from Mike “The University” Gottfredson on March 3, 2013: 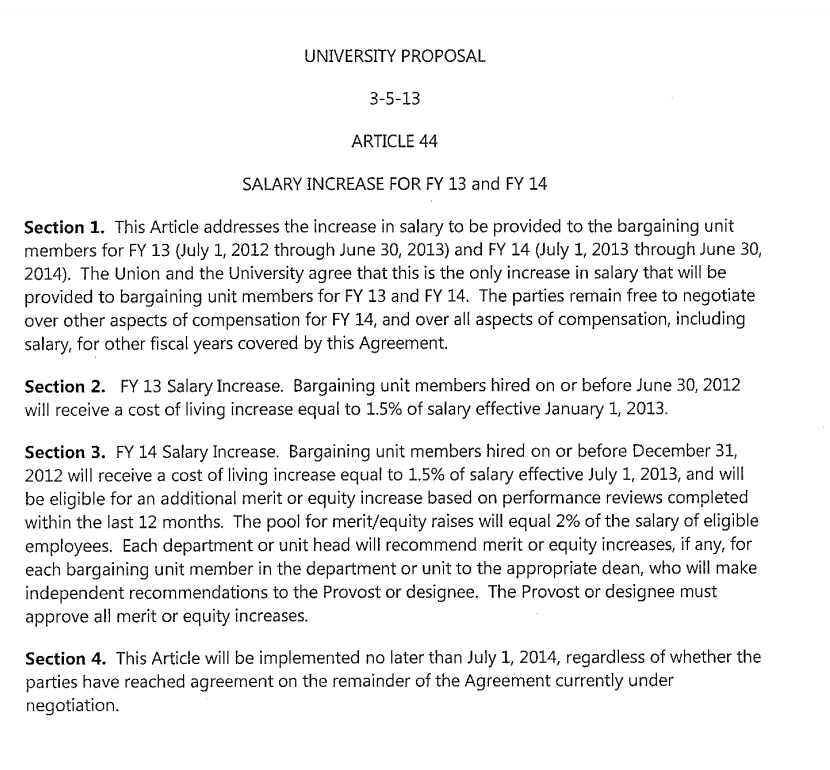 Sharon Rudnick told us this was a take it or leave it ultimatum offer. VPFA Jamie Moffitt came to a bargaining session to tell the faculty that there was no more money, but fled the session when forensic accountant Howard Bunsis started asking her about UO’s reserves.

The union ignored Rudnick’s non-credible threat and kept bargaining, and bargaining, and bargaining. It was a long angry summer. A few days before fall classes started the administration finally agreed to a 5.5% retroactive raise, and another 6% starting July 2014. Plus $350 in goat money. Call it 6% a year. Substantial as they were, even these raises were not enough to meet the Lariviere/Coltrane target of getting average salaries by department and rank to the AAU public averages by 2014. Meanwhile AAU pay has been increasing, last year by 3.4%.

So was Moffitt right? Did these raises break UO? Not according to Moody’s bond raters, who report UO’s unrestricted reserves grew from $77M to $116M and gave us an Aa2 rating, meaning “Obligations rated Aa are judged to be of high quality and are subject to very low credit risk.”

This time the university administration opened with a proposal to give everyone $600 in Chevy Van money, followed 0% for FY 16 and 1% for FY 17. Jamie Moffitt even came to a bargaining session again, to tell us, again, that there was no more money, so the union brought Howard Bunsis back to call bullshit on that claim again, via powerpoint.

The most recent proposal from the union is for 10%, spread out over 3 years. Some ATB, some merit, some external equity. The administration’s counter-proposal is due this Tuesday July 28th, 9AM Knight Library.

Last time it took XLI bargaining sessions to get a contract. This time we’re on session XVI, and it’s beginning to look like this thing is going to drag on for quite a while.

We had a productive bargaining session on Friday, exchanging a total of ten articles between us.

The main focus of the session was our economic proposal. Over the past few months, the two teams have been talking about how we can find a mutually satisfactory agreement on economics.  We maintain that the university has plenty of resources to provide faculty robust raises and that doing so would demonstrate a willingness to walk the talk of academic excellence.  So far the administration’s paltry proposal of 3% over 2 years shows no such intention of honoring the hard work of faculty. The administration team  continues to suggest that there is not a lot of money to be had for faculty raises over the next two years. We have consistently replied that faculty deserve a salary increase and a cost-of-living adjustments so we don’t lose what ground we’ve gained relative to our peers We have also consistently bargained to address uncompetitive salary floors, internal and external equity problems, and the need to reward meritorious work.

When two parties in collective bargaining find they have competing interests that appear unresolvable, there are two main options: finding creative paths to a middle ground, or making bargaining about power. The power of a labor union, of course, comes from the unity of the membership and their willingness to act together to show their employer that not meeting the union’s demands will be damaging to the employer. This shift from problem solving to power brokering typically happens when the two parties just cannot reach agreement at the table. The exercise of this type of power can be fraught with conflict, long-term loss of good will, and other unintended consequences.

Our bargaining team does not believe negotiations have broken down to the point where bargaining has become about who has the power and who can compel the other side to accept a proposal. We are still having productive conversations. But, unfortunately, we are quickly running out of negotiating room on economics. So far, as we have seen, the administration has only proposed a 3% raise over two years. This is laughably inadequate, frustrating, and insulting. In an effort to continue to have productive conversation and find agreement this summer, the bargaining team decided to explore creative options before declaring an end to productive bargaining.

One of the key themes of our bargaining platform is stability, normalizing raises instead of relying on the “boom and bust” cycle that existed at the UO for so many years. At one point in our conversations with the administration team, it was suggested that maybe we could add a third year onto the contract so that we would not “always” seem to be in bargaining mode. We decided to propose adding a third year to the collective bargaining agreement, both so we could feasibly secure our COLA, equity, and merit goals, but also so we could achieve some stability in knowing that we would be securing a decent raise for a third year.

The following is an outline of our new wage proposal (full proposal here):

This would be an average of a 10% total raise spread out over 3 years, with a concurrent 10% increase to the salary floors.

We believe that this is a healthy and sustainable wage package. However, this is also close enough to our very bottom line that bargaining could wrap up quickly, which is the goal. But if that is not the case, we will be looking to carry bargaining into the fall and trying other tactics. Stay posted. The administration team seemed amenable to a third year on the Agreement, but we will not know if our attempt to resolve bargaining this summer was successful until we see their next proposal.

Our next session is scheduled for July 28 at 9 am in the Knight Library Collaboration Center, Room 122.