7/22/2016 CORRECTION: I emailed VPSA Robin Holmes about this, relaying the suggestion for stickers in the comments. She quickly replied that the info *will* be on the cards. Good news:

I checked with the Director of the EMU and the card office to confirm that we will indeed be placing the emergency numbers on the card as we planned and as was advised and advocated for by students.  I am not sure where the information came that we were not planning on doing that—I am sure it was just some sort of miscommunication.  As you can see from the email below, not all of the numbers could be placed on the card so the idea was to have the card in a sleeve (to keep it from becoming de-magnified) and that that sleeve would have the additional numbers. 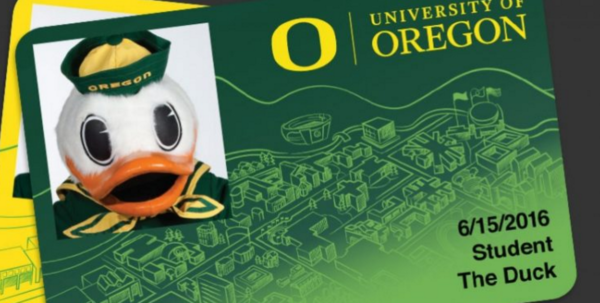 The Daily Emerald reports that a UO student group has been lobbying for the latter since 2014:

In 2014, UO Active Minds launched a campaign to persuade the university to include university resources numbers – Health Center, Safe Ride, Sexual Assault Prevention, Non Emergency Public Safety – on the back of the card.

“A lot of the time (these are) resources that students forget,” Active Minds member Juan Rivera said. “In my case, as a first year student you know about them, and you learn about them. As you progress throughout the years, you start forgetting what was originally there.”

Those numbers didn’t make it on the new design, though students will find their student ID number and barcode on the back of their new cards.

The SAFE website is here. It’s the best antidote to the confusing, outdated, and wrong information that has been posted on UO’s Affirmative Action and Police websites about reporting sexual harassment and assault. Putting the URL and 24-hour hotline number on ID’s was also very exciting to Mike Gottfredson and Robin Holmes’ hand picked $80K “External Review Committee”, as explained here. Bob Berdahl was enthusiastic. I wonder why the new UO administration wouldn’t do it, and who made the decision?