What else can you say to the people who hired you and set your salary and bonuses? You can promise them that you’re continuing the hidden athletics subsidies and won’t use any of the Duck’s budget bucket to help the academic side: 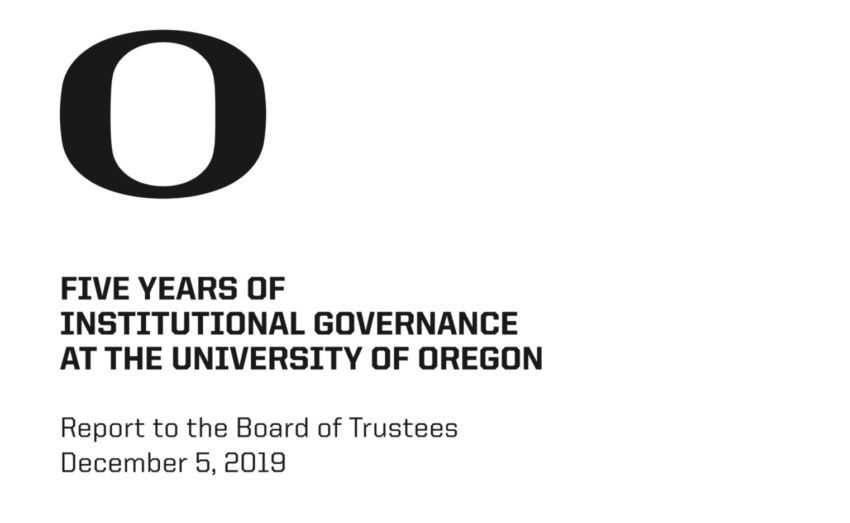 Some snippets, full report below the break:

Under the direction of the Board of Trustees, the university recommitted with full force to improving its educational and research capacity to pursue excellence in support of its academic mission. Those plans, developed by the UO administration and faculty, are now propelling the university forward. Five years later, the UO is on a sustainable upward trajectory and has strengthened its overall standing as a comprehensive university distinguished by the disciplinary breadth and depth of our programs in education and research. The progress has been noted by external reviewers, who use words such as “transformational” to describe the progress of the past five years.

He’s pretty happy with the faculty union too:

The UO also works collaboratively with its faculty union on matters related to employment. The UO is unusual among nationally prominent universities in having a unionized faculty. Among the UO’s AAU peers, only Rutgers University, the State University of New York, and the University of Florida have tenure-related faculty in a bargaining unit. A faculty bargaining unit was also certified at OSU in 2018. The leadership of United Academics has been stable and they have collaborated with the UO administration to solve such challenges as the new teaching evaluation process, benefits for postdoctoral fellows, and mandatory discrimination training for faculty. There have also been periodic instances of friction over a variety of issues, for example, funding allocations.

And even the University Senate:

Shared governance, as embodied by the University Senate, has long played an important role at the UO. At times, the senate and administration have been at odds. Relations have improved substantially over the last four years, aided by greater stability in Johnson Hall and a willingness from both administration and the senate to improve communication and collaboration. Disagreements still occur from time to time, but they are rarely over academic matters, the prime area entrusted to the University Senate. Indeed, there have been notable examples of successful collaboration, including work on curricula, teaching evaluations, sexual violence reporting requirements, and academic continuity.

On athletics, Pres Schill takes the unprecedented step of explicitly rejecting proposals to get the Ducks to help the academic side of the university, with money. Past presidents, including Frohnmayer and Gottfredson, had endorsed calls to eventually use some of the athletic department’s ever increasing revenues to support academic scholarships for undergraduates. Not President Schill:

Through the extraordinary generosity of passionate donors, athletics is able to balance its budget and maintain self-sufficiency annually. [UOM: This is not true. The academic budget pays for the Jock Box, Matt Court land bonds, we give them a break on overhead expenses, and we pay most of their legal costs, etc.]

If these donors were to suspect that their gifts were being siphoned off to benefit other parts of the university, as some members of the UO community have suggested, donors would likely reduce their support resulting in insolvency for the program. [Why does this work at other universities? Is there something peculiar about Duck donors?]