The decisions about UO’s financial and academic response to the coronavirus and its long term consequences are being made by Pres Mike Schill, Provost Patrick Phillips, BoT Secretary Angela Wilhems, VPBP Brad Shelton, CAS Dean Bruce Blonigen, and VPFA Jamie Moffitt in secret.

The idea that they would use this joint Senate Admin task force and its confidential meetings as anything more than a vehicle to claim Senate buy-in for whatever changes are coming was a sham, and Senate Pres Elizabeth Skowron and VP Elliot Berkman should have known that and refused to play along. Now, after the threat of a motion from former senate Pres Chris Sinclair and others to require that the meetings be open, and the charge and membership determined by the Senate, they’ve backed down and removed the Senate stamp of approval. 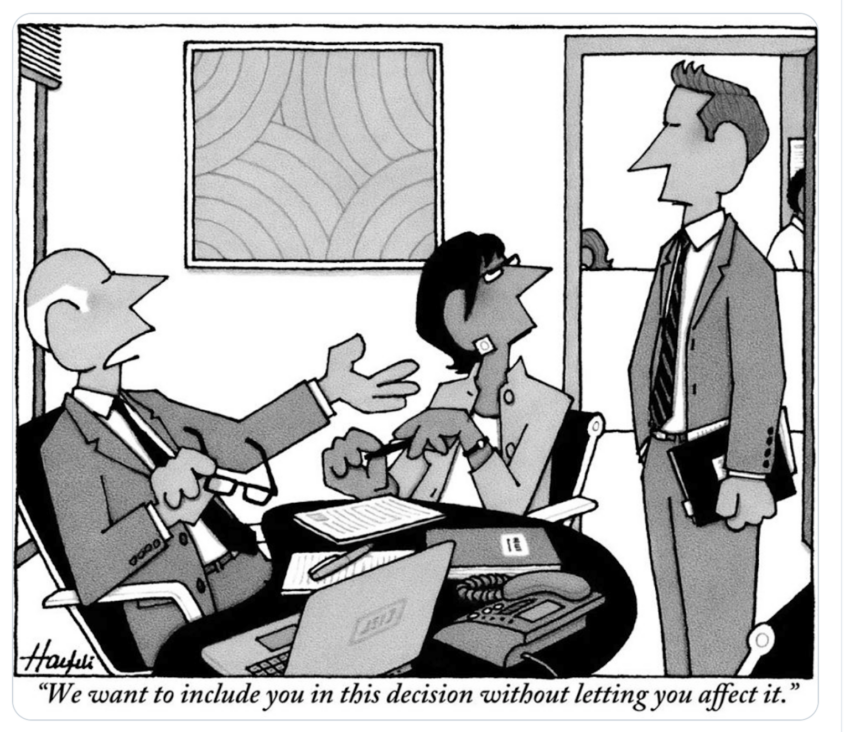 Last week, we announced the formation of a joint task force that will advise the UO president on potential long-term institutional responses presented by the COVID-19 crisis. This task force was formed in response to our recent call for collaborative long-term planning that would bring together the knowledge and experience of UO faculty, staff, and administrators to find new, creative ways to accomplish our mission in the face of significant cuts to our operating budget in the coming months/years. I am writing you today in response to questions raised about how task force members were chosen and attempt to address any confusion about the relationship between the task force and the university senate.

Our goal in proposing this task force is to engage proactively with the administration to advocate for significant representation from the university’s senate and diverse constituencies in this important long-term planning effort. We view the task force as an outstanding opportunity to promote an elusive goal:  academic shared governance in the long-term financial planning of the institution. We are proud of the level of representation on the task force, which is comprised of many individuals who serve in elected, representative positions on campus, including current and former senators, and members of university academic and advisory committees. Further, the task force is comprised of a majority faculty.  Of 15 members, 9 are women.  Three members are senior academic administrators, one is a member of the classified staff, one is an officer of administration, and there will be one student member as well.

Members of the task force were identified and chosen jointly by the Senate President (myself), Senate President-Elect Elliot Berkman, University President Mike Schill, and Provost Patrick Phillips.  Together the Senate President and President-Elect generated a list of prospective members for the Task Force and the President and Provost made some edits and suggestions as well.  Together we finalized a list of candidates. All who were approached recognized the importance of this opportunity and agreed to serve. We sought broad representation from the ranks of TTF and Career Faculty, Classified Staff, and Officers of Administration across campus, with a student representative to be named in the coming weeks.  We sought individuals who would bring diverse expertise and a deep commitment to the institution-as-a-whole, while also keeping the committee manageable in size.

In light of concerns that have been raised, we are changing the name of the task force to the “University Task Force on Long-Term Financial Responses to COVID-19”, so as not to confuse matters and make it clear that the members of the task force have not been chosen by the senate, nor have they been formally endorsed by the senate. This name reflects the reality that the whole university will need to be part of our long-term response to the changes brought forth by the pandemic.

In closing, Elliot and I would like to express our gratitude to those of you who have worked with us to clarify the role this task force will play in the coming months. We view this conversation as yet another example of the positive outcomes that result from direct communication, constructive engagement, and shared governance and cooperation between the senate and administration.