A brave man. Trustees are not supposed to disagree with Lillis in public. I’m sure there will be consequences. I hope there may be action.

First he pointed out to Duck AD Rob Mullens that it’s the football players – mostly black – whose unpaid labor earns 75% of the AD budget and supports Mullens and the “non-revenue” sports, which are mostly white. So Black Lives should Matter to Mullens, if he wants to keep getting paid. Video here. 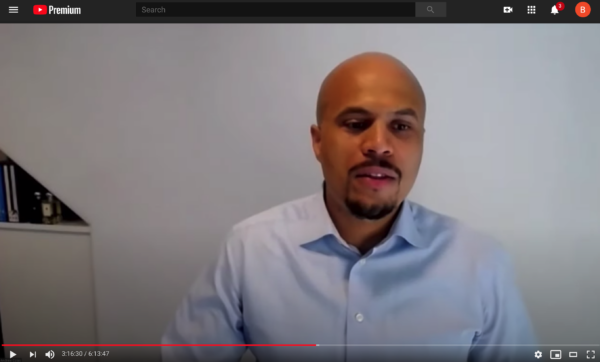 At one point Colas noted that Deady had later changed his racist views – and argued that Deady himself might recognize, were he alive today, the pain and suffering he had caused so many blacks, and agree that his name should not be in the face of them now.

Matthew Deady, after whom the university’s first building is named, was appointed to the position of President of the UO Board of Regents in 1873. He was a pro-slavery delegate to the Oregon constitutional convention, and Colas read quotes from Deady detailing his racism, including saying that Black people are just as much property as “horses, cattle and land.”

“I cannot accept a person who would see me and believe that I am as good as a horse, cattle or a piece of land. That wrecks me inside,” Colas said Thursday.

Because of Oregon’s public meeting laws that require advanced notice, the board couldn’t debate or vote on renaming the building during Thursday’s meeting.

“We will visit about this and see what we want to do here,” Board Chair Chuck Lillis said.

Actually, the Board has broken the intent of Oregon’s public meetings law at least three times under Chuck Lillis and Angela Wilhelms leadership to take action without advance notice or in secret. Once when they tried to ram the delegation of authority legislation through without even letting the board see it until the morning of the vote – this attempt was stymied when RG reporter Diane Dietz and I saw Chuck Triplett putting it on their desks during a coffee break, took some quick photos, and the faculty raised hell. Then again when they gave Mike Gottredson a $940K buyout without showing the contract before the meeting, and again when Wilhelms kicked Dietz and me out of a secret “training session” at the Eugene Hilton, where the board decided how to subsidize the IAAF Track and Field Championships.

More from the Emerald:

The board voted to change the name of Dunn Hall, named after a KKK member who was a classics professor at the UO, to Unthank Hall, in 2017. The hall is now named after DeNorval Unthank Jr., the first Black student to graduate from the UO’s School of Architecture and Allied Arts.

But UO President Michael Schill decided to not rename Deady Hall that same year. In the course of that decision, the board of trustees compiled a report on the subject.

At the time Pres Schill promised to at least put up an interpretive area in Deady, explaining his complicated racist history. It never happened. I assume VPEI Alex-Assensoh is still revising the org chart for the committee, and scheduling some more Jeffersonian Dinners at Marche to decide on the wording.