$732.92 is a bit rich for my blood. How much would you charge me just to see the agendas of the meetings, documents distributed for meetings, and minutes, if any?

(I’m ccing the PAGIA Chair Kim Sheehan and the members, in hopes they can easily provide these public records.)

3/17/2015 update:  What’s up with the secretive PAGIA that Kim Sheehan (Advertising) chairs?

I don’t know, but they sure are trying to hide it:

I made [the PR request below] 3 weeks ago. I’d appreciate it if you could let me know when you expect to be able to provide these documents.

This is a public records request for any documents sent or received by the President’s Office relating to former President Gottfredson’s decision to establish the “President’s Advisory Group on Intercollegiate Athletics”, the determination of its membership, and its activities since.

On April 29 last year, the day after he saw the EPD report on the basketball rape allegations, President Gottfredson suddenly announced he would not require AD Rob Mullens or other athletic department employees to meet with the UO Senate’s athletic oversight and advisory committee, the IAC. Gottfredson said he would instead establish his own “Athletics Advisory Council” and make his own appointments.

The AD has been trying to evade the Senate IAC since at least the 2004 Athletics Task Force report, but Gottfredson’s decision was ostensibly based on a report to the Senate from last year’s IAC chair Rob Illig (Law, and yes, it’s that same Illig.): 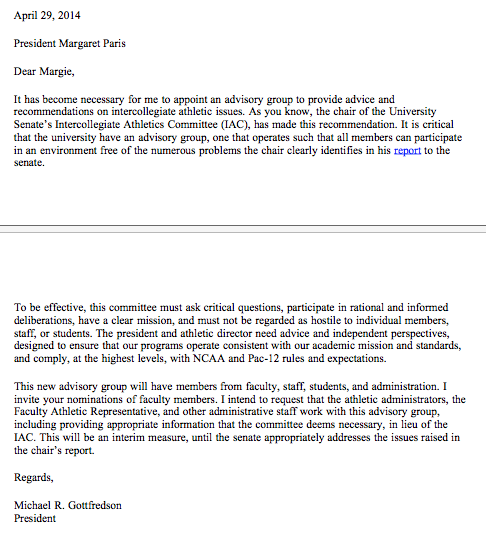 The Senate IAC has now repudiated that report, the Senate Task force on Sexual Violence has directed the IAC to take the point on sexual violence and athletics, and the IAC has voted to take up that responsibility over the objections of Margie Paris (Law) and Kim Sheehan (Advertising, and PAGIA Chair): 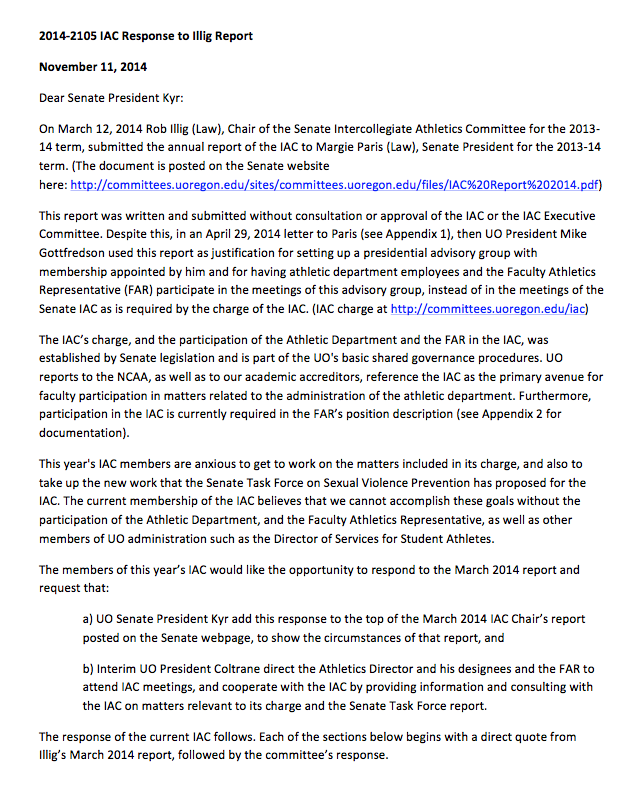 But apparently that’s not enough to put an end to another Johnson Hall effort to subvert shared governance. The charge and membership of the PAGIA, which is chaired by Kim Sheehan (Advertising) is here.