In what may be it’s fastest turnaround time since I asked Dave Hubin for a copy of Jim Bean’s sabbatical contract, UO’s Public Records Office says today that “there are no responsive records” to the LA Times request for federal subpoenas or search warrants involving Altman or his coaches. For comparison, here are the last 3 or so months of the public records log.

10/8/2017: Presumably any search warrants or subpoenas would be related to the FBI’s investigation of what the federal government calls sports bribery, but what Joe Nocera and most of the economics profession say is just a student-athlete trying to make a little money for his family playing basketball, despite the NCAA cartel’s efforts to keep it all for the coaches and athletic directors: 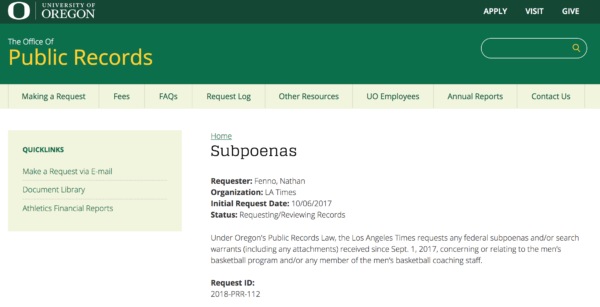 The FBI has a handy tip line:

Joon Kim, the acting U.S. attorney in Manhattan, went so far as to encourage participants in sports bribery to rat themselves out. “Better for you to be calling us, than for us to be calling you,” he said:

And CBS sports reports that the FBI investigation of college basketball may hurt Chip Kelly’s chances of getting a new college football job:

Never mind the former Oregon coach may not formally be looking while working in an ESPN studio this season. In a lot of people’s minds, Kelly is the best coach not to be on a sideline.

In fact, his name surfaced this week as a possible replacement for Butch Jones at Tennessee.

But if and when he returns to college, Kelly would come with newly defined baggage thanks to the ongoing FBI investigation into college basketball revealed last week.

It has been almost 4½ years since Kelly was sanctioned by the NCAA after he had left for the Philadelphia Eagles. He was slapped with “failure to monitor” in the infamous Will Lyles affair. Even worse, Kelly was handed an 18-month show-cause penalty — basically in abstentia — after he went to the NFL.

Oregon was accused of paying $25,000 to Lyles, a shadowy 7-on-7 coach, in exchange for his guiding players to the Ducks. Lyles admitted as much.

That’s basically evidence of the same third-party influence Adidas was accused of engaging in by the FBI by paying college basketball assistants to influence players to sign with the shoe giant.

While that sort of college basketball culture has been entrenched for decades, the NCAA is desperately trying to keep it from filtering into football.

My favorite part of that scandal was how the Ducks tried to hide Chip’s $25K payment to Willie Lyles’, by reporting it as expenditures for “Books Publications & Other”:

And then when UO tried to fine Chip $20K, as allowed under his contract, he skipped town without paying. Or at least that’s what Paul Swangard tweeted: