MMXX-I is here. My continuing series on Budget Buckets is here. If you don’t like my blog read the official Union tweets.

Recap from MMXX-II: The union proposed a new article on faculty Performance Improvement Plans, which would allow departments to make tenured faculty who had failed at research get their shit together or do more teaching. The fact that a faculty union is proposing serious consequences for those few members who are not doing their job and making others cover for them should come as no surprise to anyone who understands basic economics. But it will probably throw Board of Trustees Chair and one-time B-School Dean Chuck Lillis – who apparently believes that the median faculty is deadwood and that the union is their agent – for a loop.

Other important proposals include reasserting shared governance control of faculty hiring, and figuring out how to keep the temperature in PLC to somewhere between 60 and 85 Fahrenheit.

See below for the details, Chuck, because the next proposal will be PIPs for you and your Trustees.

MMXX-II Live-blog. Usual disclaimer: My opinion and interpretation of what the bargainers are saying, thinking, or should be saying or thinking. Nothing is a quote unless in quotes. Rumor has it the union proposals will include Research Support, Sabbaticals, and Hiring. I don’t know what the administration will do.

Admin team is 10 minutes late. Rumor has it they also thought the meeting was in the EMU. About 15 faculty sitting in catching up on their reading, and a few HR people taking notes.

Matella on research support: What does ASA funds mean, what can they be used for? Cecil: $1500, objective is to expand CAS’s program to carreer/NTTF in other colleges so they also have professional development funds. Matella, technical Q on PEBB benefits: [UOM: Medicare For All will fix this, no worries.]

New articles/amendments from the Union:

Article 41, Distribution of the Agreement. Snoozer.

Whalen presents. Seems to mostly be about combating climate change:

[UOM: I think this language comes from the Federal Bureau of Prisons.] Matella asks if this is really a problem. Whalen: Deady, PLC, etc. Matella proposes cooling stations with misters, like in marathon races. Thrifty.

Wakefield: Clarifies that release time for union service will be in the form of course releases: 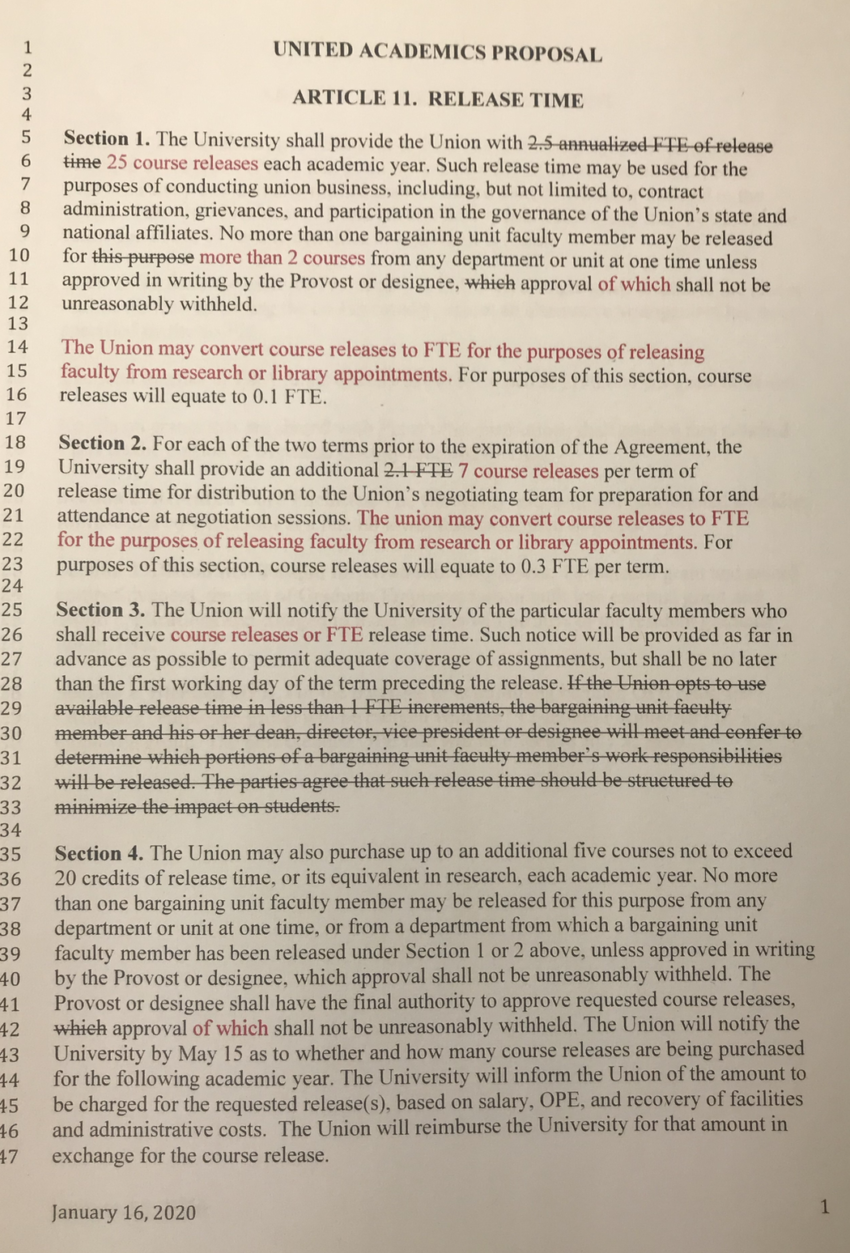 Matella: Appreciate that this is simpler, it also raises questions about depts ability to negotiate special cases. 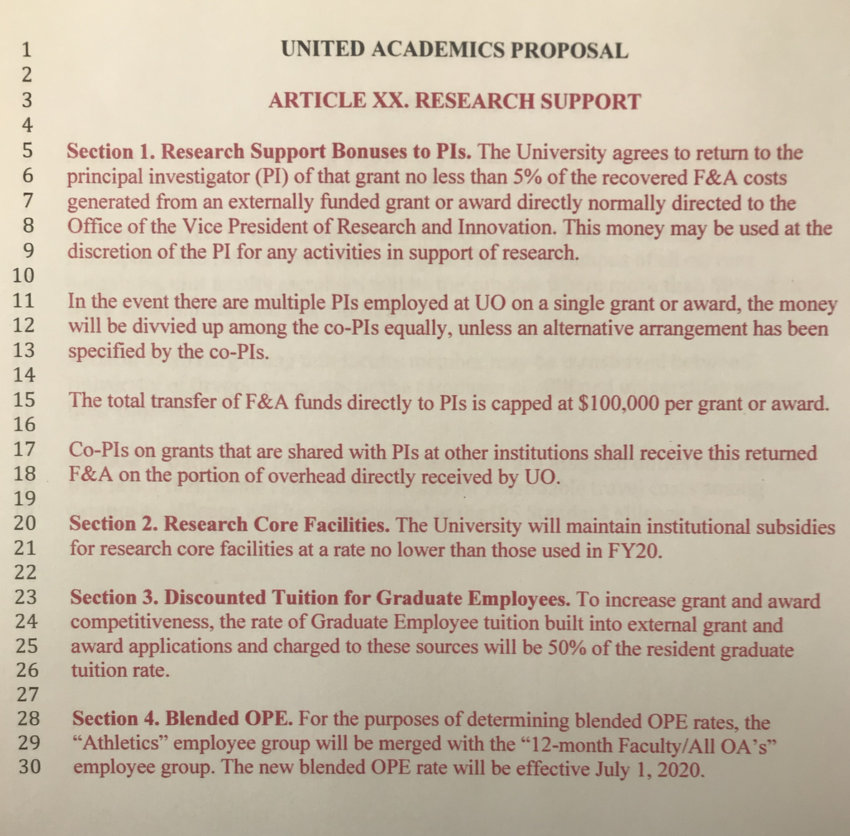 Rosiek presents: Gets more money to labs. Sets minimums for returning a portion of grant ICC/F&A/Overhead to PIs, cuts the cost of hiring GE’s for grants, and cuts recent increases in grant OPE by stopping the new process of separating faculty from athletics when calculating OPE (which is a big benefit to the Ducks, and a big cost to UO research).

Boscha: Assigns faculty to a home campus and doesn’t allow forced administrative transfers to other campuses, e.g. Portland to Eugene. If this had been in place back when CoD Dean Christof Lindner transferred 3 Portland architecture profs to Eugene it would have saved UO the ~$250K GC Kevin Reed spent resolving the ensuing lawsuits. 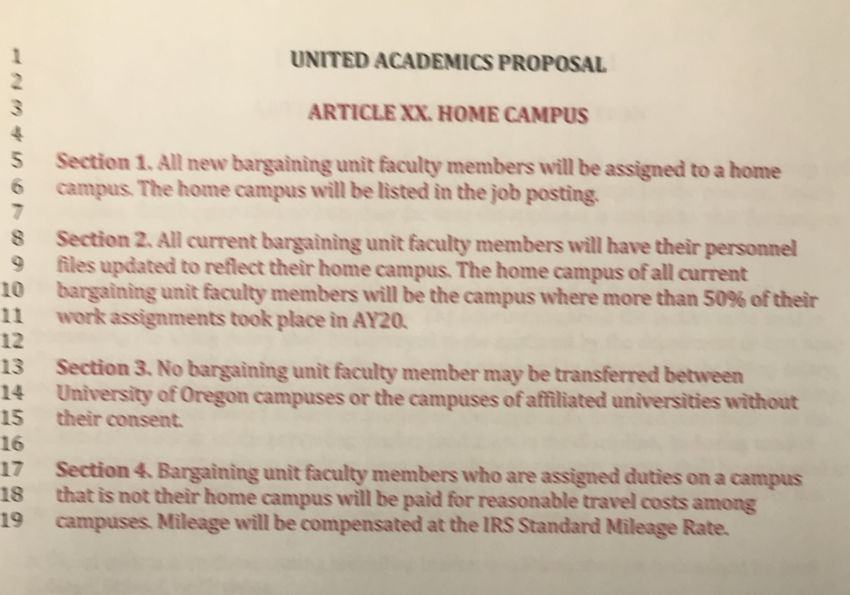 Cecil: Also says if you teach a class at a diff campus you get travel costs. (Sorry Knight Campus faculty, you count as part of the Eugene Campus.) [UOM: do you have to file receipts through Concur? Because if so I’d rather just fold 50% of it into pay.]

Sinclair presents: Codifies sensible practices, some in current policies, which are only haphazardly followed at present: 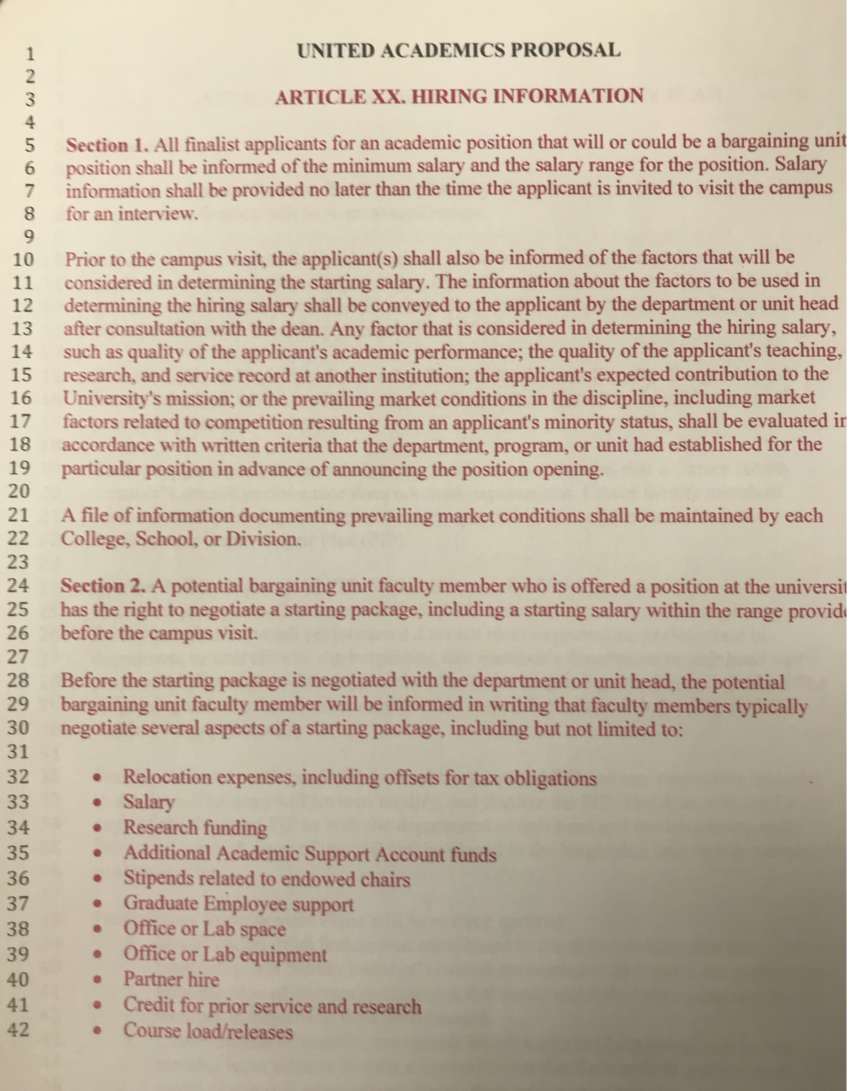 Green, Epstein: The requirement of stating salary ranges in advance is designed to reduce bias. as in not letting women and minorities know what the white men are getting. Matella: What if it’s a new assistant prof position, but a senior assistant applies? Good Q.

Cecil: Union shares Administration concerns about faculty not meeting standards and the fact that standards are unclear. Wants to help faculty get back on track, and make sure that those who don’t are not a burden on the rest of their department. Important, and long: 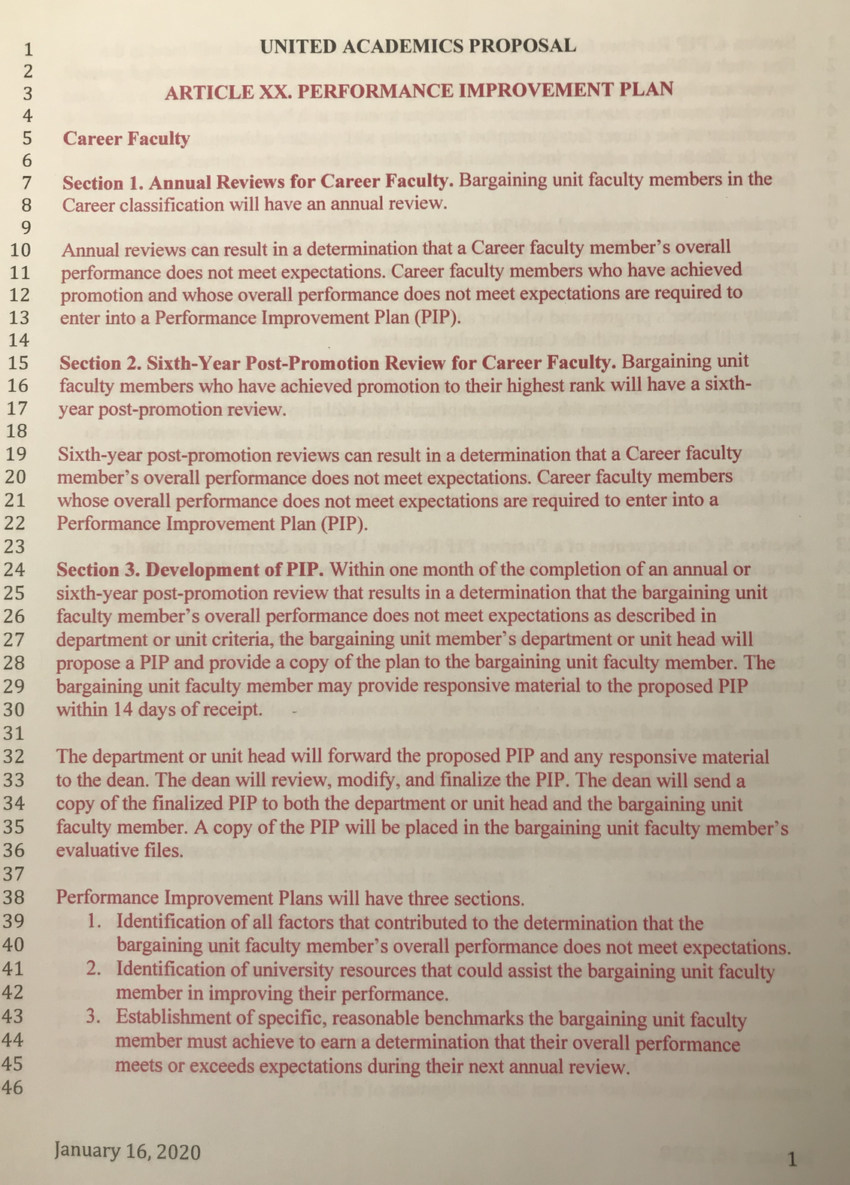 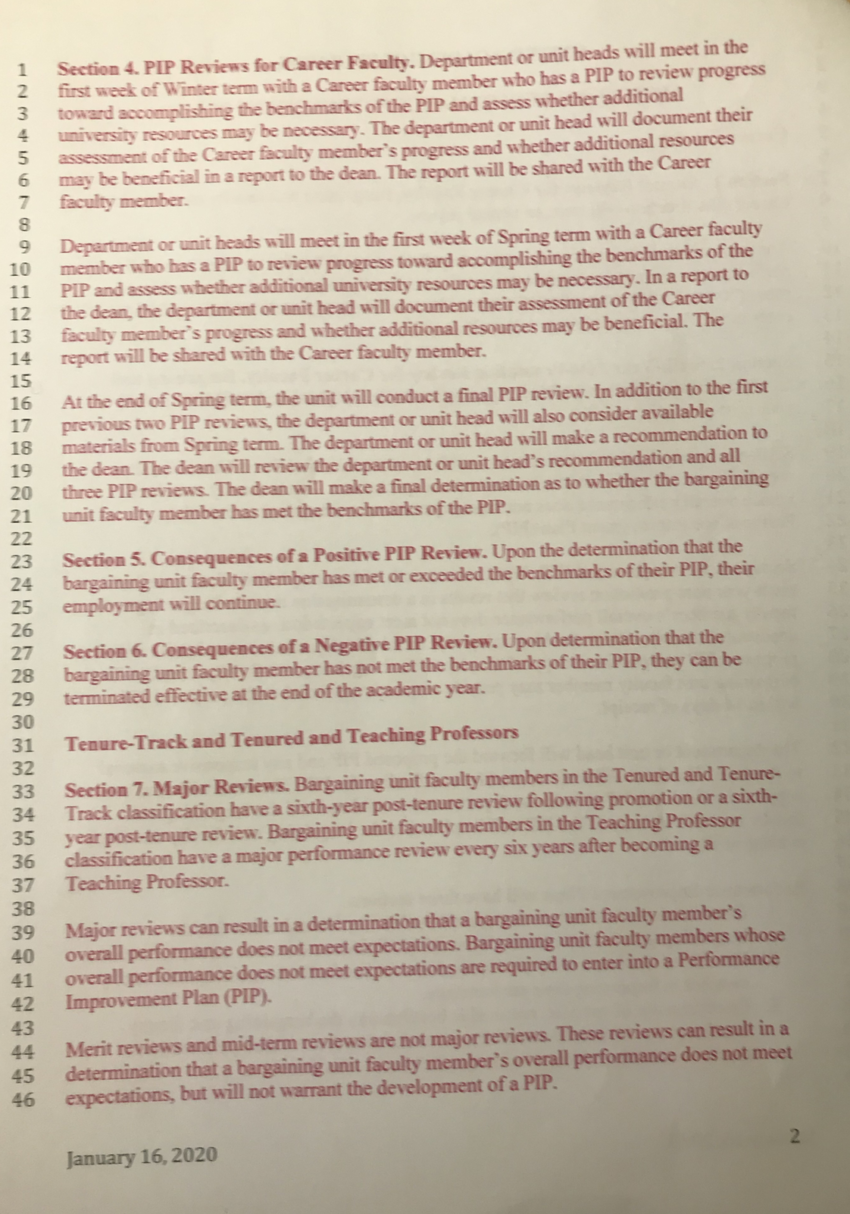 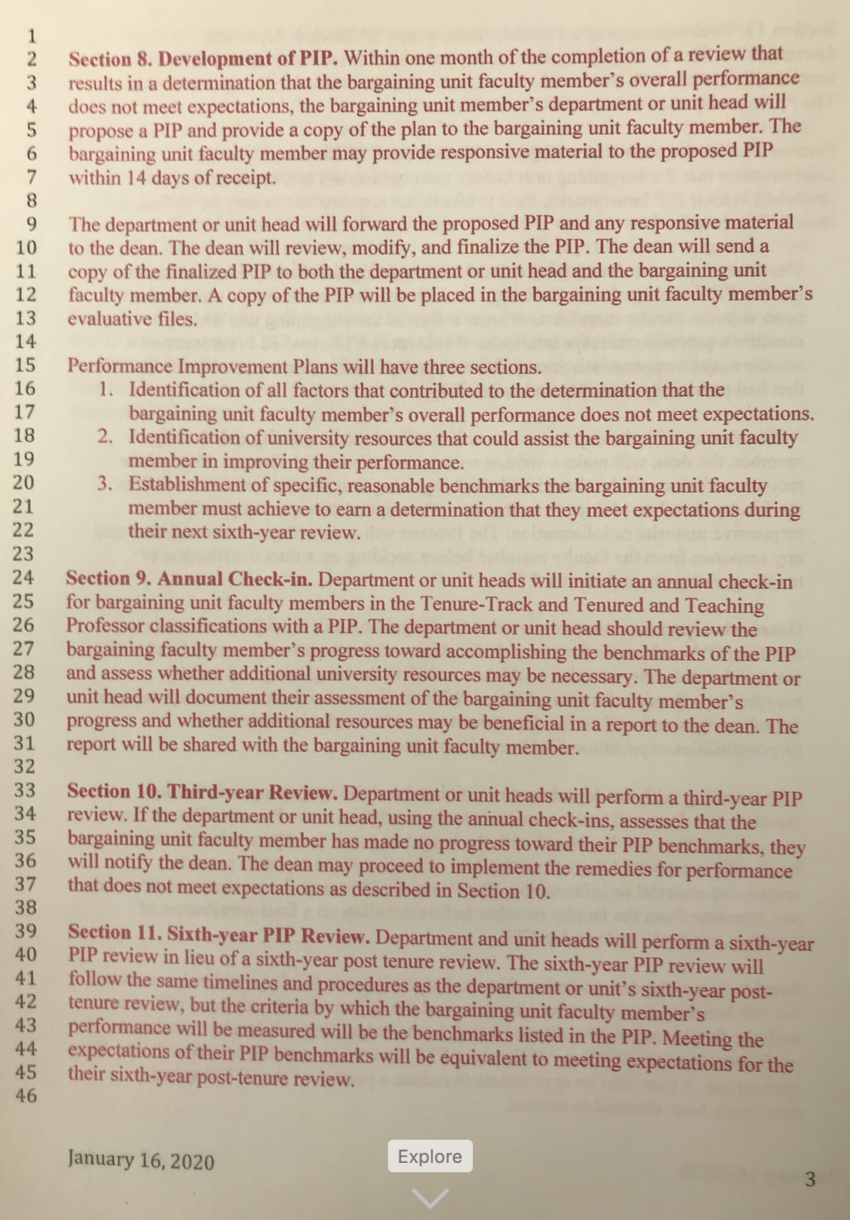 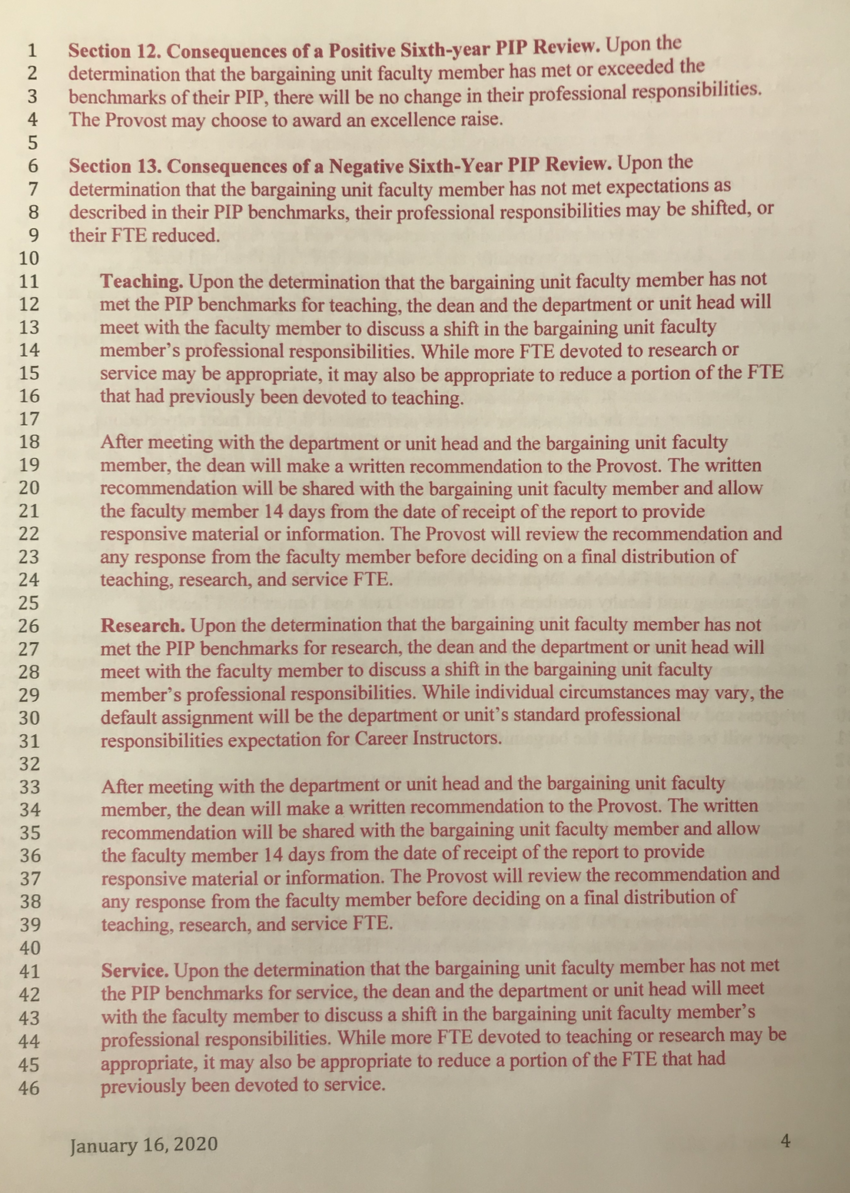 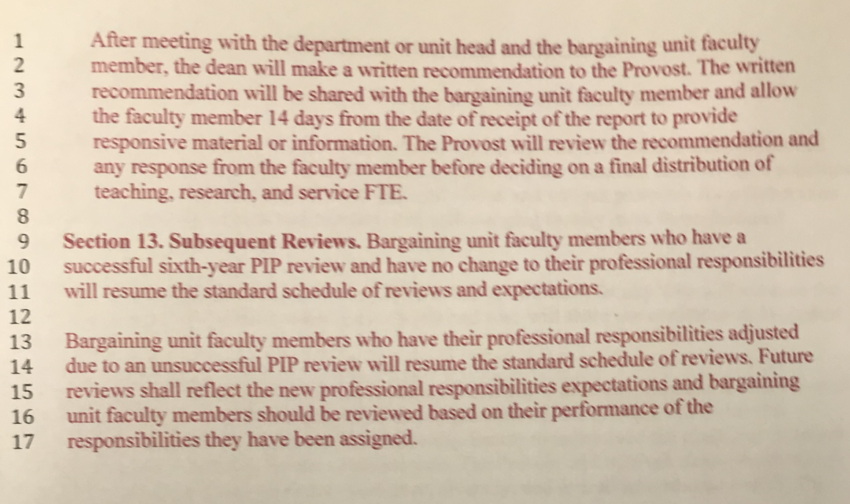 For Career/NTTF: Adds “expectation of permanent employment” and establishes that reviews can result in a Performance Improvement Plan (PIP). They’d then have a year to improve, or be out. Much more sensible than the current three year contracts, which can be not-renewed after three years with little notice.

For TTF: 6th year post-year reviews (not mid-term 3rd year reviews) can result in a PIP. After 6 years from starting the PIP there’s a major review. If expectations are not met, extra teaching or reduced FTE can be imposed. Section 13 goes into details.

Productive back and forth on what is done at the department and the provost level. Proposal is to use department level policies to set expectations, success or failure to be eventually reviewed by provost.

If TTF fails to meet PIP research improvements, their responsibilities (but not pay or title) is shifted to those of a NTTF/Career, perhaps with some research FTE.

Ford: Is it right that TTF get a full 6 years to save their life’s work? Cecil: If they’re doing nothing, they only get 3. Ford: I meant to say is it right that we don’t get to help them for 6 years? Cecil: There are annual check-ins, nothing prevents the admin from helping anytime.

Person sitting to Matella’s right: Grievable? Cecil: Oh yeah. Except we can’t grieve academic judgement, so grievances would require policy violations or “arbitrary and capricious” decisions. [UOM: the first goat reference of this contract bargaining, and it’s rather oblique.]

Epstein introduces: Goal is to insure that hiring is done in a way that reflects academic considerations. Under the IHP, it’s become up to the whims of the ever-changing current Provost and President. Bargainable, because the IHP affects workloads.

Most of this language comes from the IHP proposal, as originally sold to the Senate. This language enshrines the University Senate as part of academic hiring.

Matella: We’re really interested in clearing up miscommunication on the IHP. We agree there is a strong role for the Provost and Senate, not so sure about letting the union actually help the Senate enforce the promises some reckless provost has made to the faculty and university.

Urbancic: This is not about substituting the faculty union’s academic judgement for that of whomever has been appointed provost.

Former Senate President Chris Sinclair: IHP was passed as Senate legislation – but the administration is now changing the rules, without transparency. This is not acceptable. 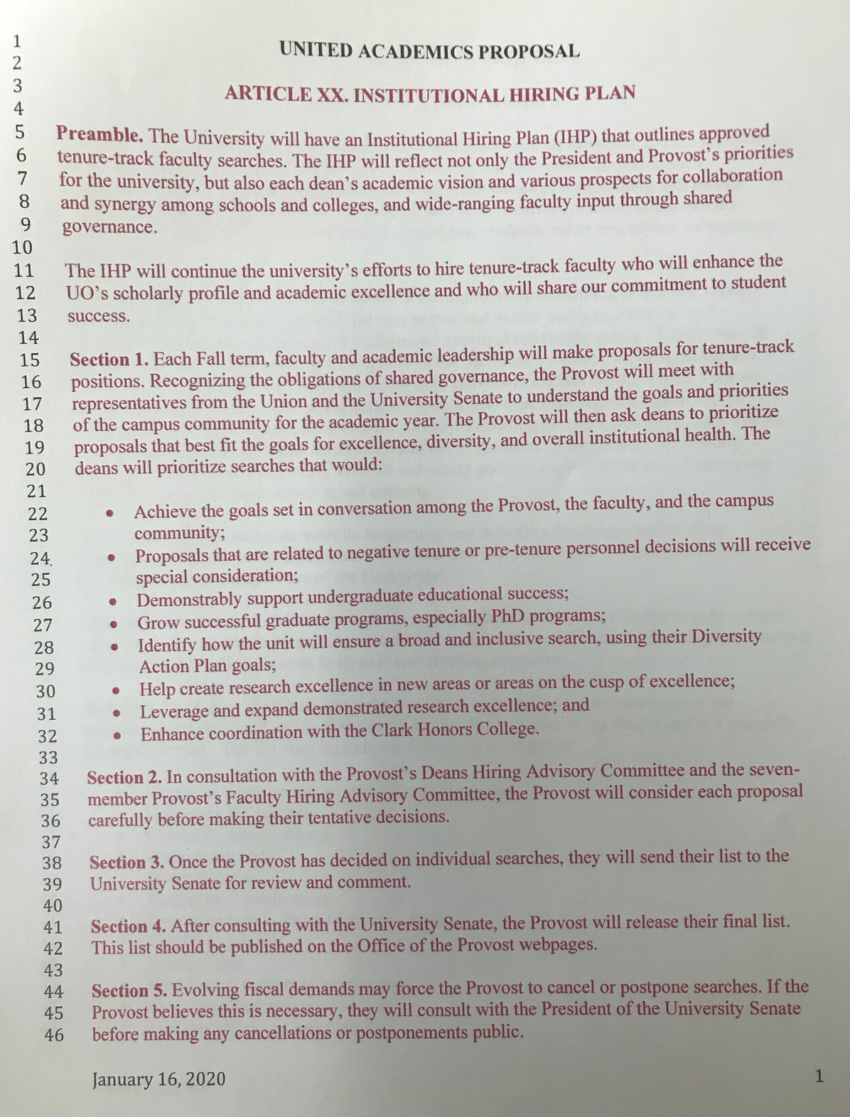 Vigorous discussion about whether or not to capitalize Union and University (i.e., the Johnson Hall administration).

Long, but Cecil says no big changes. Cleans up some old language from old OUS OARs. Gives unit the salary savings from sabbatical back to the dept to hire replacement instructors, a big issue, particularly in small depts. CAS has recently started confiscating the funds.

Cecil: Union has 6 more proposals for next week. Matella: Thanks, we’ll have 5. Cecil. Great, you go first. Session II ends with friendly banter between the teams. Maybe a little too friendly.