Given the proposal by the UO Administration’s lead bargainer Missy Matella along these lines during Thursday’s bargaining, this seems like a good time to repost this from 2013. The numbers below are old and for all Oregon universities not just UO, but very roughly they suggest potential savings for UO of perhaps $20M a year from self-insurance, with no cuts in health benefits. That would buy a lot of parking and day care, or about a 5% raise for faculty, OA’s, and SEIU staff. And Duck coaches, I suppose.

Obviously no sane person would trust the UO Administration not to use such a change to weaken  benefits, particularly after their attempt to do so during the recent GTFF bargaining. And Matella seems pretty sane. But the Faculty Union could write legal protections into the CBA that would guarantee no increase in deductibles etc. Hence Matella’s appeal to the Union.

During the first year of Gottfredson’s administration UO faculty pay has fallen still further behind the average at other AAU public universities:

The UO administration is now arguing that generous UO benefits justify not getting UO salaries to AAU peer levels. However, while benefits at UO may be more expensive than those at our peers (though that’s an open question, see bottom) that does not mean that they are more valuable to faculty.

In a nutshell, UO pays about 25% more for health care than employees get in benefits. The loss is equivalent to about 4% of salary for the average professor. UO pays as much as 33% more for retirement benefits than employees get in retirement value, making UO retirement benefits worth perhaps as little as 2% more than those at our comparators. UO also does not provide housing subsidies, and other benefits, that many other AAU publics provide.

All in all I think the burden is on the administration to show that UO benefits are more valuable than those at our comparators – and they’ve made no serious effort to do this.
Lots of ins and outs here, I’m sure it’s not all correct for PERS, and it ignores some twists. Comments are welcome – I’m talking to you, Bernie – and I will try to update this in response. It’s mainly about faculty but I think most of it applies to other UO employees.

Health insurance costs UO $1260 a month, per covered employee, paid to the state PEBB health care plan. This rate is the same for all state employees.

OUS has tried to withdraw from PEBB, because OUS employees are healthier than the rest of the state work-force. Hannah Hoffman has a good story on this in the SJ, with a link to the OUS report, which says:

By PEBB’s own accounting, the Oregon University System is a net payer into the state insurance program. In 2011, PEBB estimated a fiscal impact of $51 million if OUS were to separate from the state insurance program. The SB 242 Financial Analysis conducted for this report estimates that if OUS had operated an independent health insurance program in 2010 and 2011, there would have been a savings of about $67 million for this two year period compared to PEBB with self-insured OUS medical and dental plans, and about $49 million if fully-insured plans had been used.

Let’s call it $59M for the 2009-2011 biennium. OUS PEBB claims totaled $235M for the same period. So the subsidy is roughly 25%. OUS used this argument to try and get out of the PEBB system, arguing that it was wrong for student tuition to go to subsidize benefits for non-university state employees.

The corresponding argument is that the value of UO’s health benefits to its employees is only about 75% of what UO pays in costs to PEBB.

Way more complicated. The basic argument is that the state retirement plan, PERS, has a large unfunded actuarial liability, or UAL. The state has promised more to current retirees and workers than it has set aside to pay them, and now it is balancing the books, by increasing what UO has to pay in. These extra payments are not entirely of value to current faculty!

Last I looked the UAL was about $16B in 2009, market recovery has reduced it to I think $8B. The goal is to shrink that to $0 over 20 years, and then have a fully funded system with reserves sufficient to pay all promises. Once that is achieved, contributions for current workers would fall, and would all go towards their own benefits when they retire, paid from their own contributions plus the earnings from their contributions. See here for more: 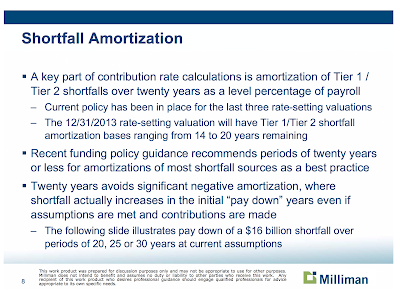 In the meantime, current payments by UO for employee retirement benefits go in part to reduce the UAL for past retirees. If you want an illuminating anecdote, read Ted Sickinger’s amazing piece in the Oregonian about former UO football coach Mike Bellotti. UO paid only a few hundred thousand dollars into PERS for him while he was working. Bellotti’s benefits are about $500K a year, and his unfunded liability is about $10M.

So, a good chunk of the money UO pays to PERS, ostensibly for your retirement, actually goes to pay for Coach Bellotti and others of his ilk. You’d have to be quite the sports fan – like UO VPFA Jamie Moffitt – to count this as a valuable benefit.

How much does this reduce the value to you of what UO pays in retirement benefits into PERS? The official “PERS by the Numbers” guide estimates it’s 33%:

Approximately 68% of PERS’ total accrued liability is for members who are no longer working in PERS-covered employment (retirees and inactives). As a result, approximately 33% of an employer’s contribution rate is associated with these groups. 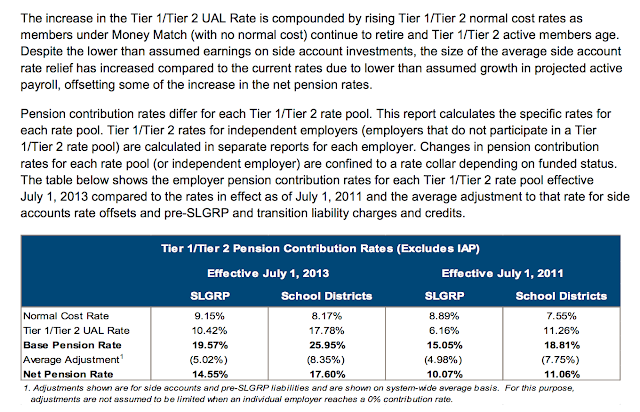 The 6% pickup contribution, paid by UO, goes to the PERS fund for old hires (I think) and into a separate fully funded defined contribution IAP account for newer ones. And if you opted into the ORP, all the money goes into an independent defined contribution plan. You’re not helping out Bellotti at all, you free-rider.

Let’s say that, on average, retirement benefits cost UO 17.5% of salary, including the 6% pickup. If we trust PERS, 1/3 of that is a subsidy to current retirees. So, lets say the value to the average UO employee is a bit less than 12%.

(However, for people who opted into the ORP defined contribution plan, all their contributions go into their own individual accounts – no subsidy for the Bellotti’s.)

For AAU publics the average cost of retirement benefits is about 10%. Now maybe some of them are also dealing with UAL’s, using similar subsidies, so their value might also be less than their costs.

But if not – and keep in mind there are plenty of other caveats, most notably the ORP one – the value of UO’s retirement benefits is on the order of 2% more than our comparators, not the 6% number the administration trots out. Having strong retirement benefits will help put you on the way to a happy, prosperous retirement, but for extra financial security once your working days are over, you might want to receive support from a financial advice group such as Key, who can help you when it comes to matters of equity and annuities. Companies such as that can help when it comes to creating a budget for retirement so you aren’t left out in the end wondering where your money has gone. If you still don’t fully understand what equity you have in your home and how it can help benefit you in your retirement or would simply like more information then go to equityrelease.co.uk.

For some people, planning how much money they’ll have for their retirement may seem like a long way off, but preparing for this situation now could help to make sure that everything is already in place. Especially when it comes to your finances. Having enough money saved in an IRA can help to make sure that you will be able to live off this money when you are no longer receiving an income. Some people may even make the decision to invest in precious metals such as gold and silver to further establish their financial security. With help from companies similar to Lear Capital, (you can learn more here) you can build upon the funds you already have in your accounts to make sure that you are able to live out your retirement years in the best way possible. But it could be paramount to your financial situation that you decide to start planning for your retirement now.

UO has nothing. I haven’t done a real search, but here are a few programs by other AAU publics to help faculty buy houses. Many also have university owned, heavily subsidized faculty housing, typically used by new hires while they save for a down payment.

U of Colorado. While Paul Weinhold at the UO Foundation gave Pat Kilkenny a balloon loan for his baseball park, the UC Foundation will actually give their faculty subsidized loans to buy a house. https://www.cusys.edu/academicaffairs/documents/FHAP-description.pdf

UCSD. 40 years subsidized rates, plus help with the down payment: http://academicaffairs.ucsd.edu/resource-admin/homeloan/

UCSB. Subsidized, low down payment rates for up to $1.3M: http://www.housing.ucsb.edu/faculty-housing and https://ap.ucsb.edu/policies.and.procedures/red.binder/sections/%5B1_17%5D%20New%20Ladder%20Faculty%20Commitments.pdf