Elevator version: The Oregon Supreme Court tells the Oregon Board of Bar Examiners that they must add a new at-home bar exam for October, and give “diploma privilege” to all Oregon and most other law school 2020 grads, allowing them the right to practice law in Oregon if they can find a job. 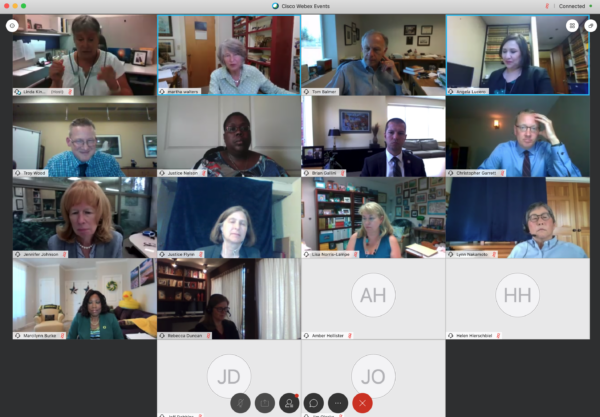 Live-blog: It took a while, but I finally got connected to this meeting. The Court first voted in favor of allowing an October on-line (at home) exam as an optional substitute for the in-person one scheduled for July.

2:03 PM: – they’re now debating a motion from one of the judges to allow diploma privilege. But they don’t actually have a written motion. The other judges are throwing out questions, she’s saying things like “oh, right, the motion also would …, or maybe it should say….” Pretty amateur.

From what I can tell, the motion would give all those graduating this spring from Oregon law schools Bar admission without having to pass the bar exam. It would extend the same “privilege” to graduates of all ABA accredited schools with a first-time bar pass rate of 86% or better.

Why 86%? The judge says because the bar-pass rate is the best metric of law school quality, and the average national pass rate is 85%. The later is a mathematical fact, the former is nonsense. In 2017 Oregon lowered the cut-rate and the average pass rate for Oregon’s schools suddenly jumped from 60% to 84%. This improved the quality of an Oregon law school education?

As it happens, the ABA has recently released the latest pass data, and all three of Oregon’s law schools are below the judge’s magical 86% threshold:

No one points this out. They do ask the Bar guy how many new lawyers this motion will produce – ones that would normally be screened out by the bar exam. His response doesn’t really makes sense to me. Maybe a hundred from Oregon, another hundred or so from other states? So maybe a 40-60% increase?

Still no written motion, but the court passes it anyway. So what did they pass? (They’re not sure either, so in the end they give it to their clerk to write up.)

Another judge then proposes a third motion – a lower cut rate for the July exam. Another surprisingly ill-informed and predictably innumerate discussion ensues. This also passes.

More confusion among the judges abut what exactly they did with motion 1.

Then UO’s Dean Burke asks the court to modify motion 2, to also extend the diploma privilege to students who have not yet graduated – i.e. summer 2020 grads. Still more confusion amongst the judges about what the motion originally said. They think it said Spring 2020, so they think they need to change it. Another dean tries to chime it. Eventually she figures out how to unmute herself. Asks about Winter 2020 grads. Why don’t they get privilege too? Sure, someone says – all 2020 graduates. Done.

Chief Justice Waters asks the court if they want to throw privilege at anyone else while they’re at it. Philosophers? Will no one move to give the PhD philosopher’s diploma privilege too?

In what may well be a first for the court: 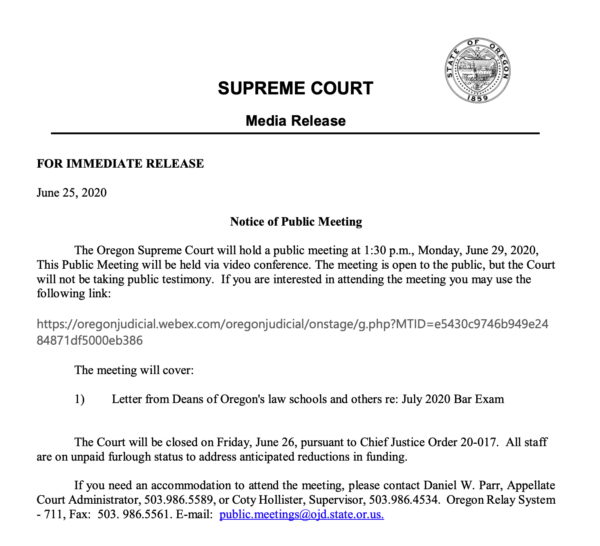 WWeek’s 2017 story on the last time the Court met to goose the exam is here:

… UO Matters reports that Board of Bar Examiners held a closed door executive session to vote on whether it would recommend changing the passing bar exam number to the Oregon Supreme Court.

The board did not respond to UO Matters’ request for records of meeting material. It settled on a passing bar score of 276.

The deans’ letter, along with a letter of recommendation to change the bar score from the board’s chairman, Jeffrey Howes, was sent to Oregon Supreme Court Chief Justice Thomas Balmer.

On May 3, the Oregon Supreme Court accepted the request to change the requirement for becoming a practicing attorney.

The court voted on the score change during a 70-minute public meeting, where it was one of 30 agenda items. The Daily Emerald requested transcripts of the meeting and were provided a “non-specific page of minutes detailing the events of the meeting,” and no record of whether votes where cast.

It seems the Bar and the Court had no idea what they were doing, and increased the pass rate by far more than Oregon’s law deans had led them to expect. Which probably explains why the Bar is taking a hard line this time.

Back in 2017 the deans of Oregon Law Schools were upset by the fact that so few of their graduates were able to pass the bar exam. So they did what any business whose product failed to pass quality control would do – they asked the Oregon Bar and Supreme Court to make the exam easier.

After a bunch of meetings that probably violated Oregon’s public meetings and records laws, the bar and the court agreed to relax their standards, and the pass rate (for first time takers in the regular summer exam) has since jumped from 58% to 84%. (The UOM post on this, based on a series of public records requests, is here.)

Dumbing down the bar exam was good news for the deans, because the pass rate is part of the US News rankings they are evaluated on. It was also good news for the marginal students who otherwise would have failed, but bad news for the good students who could have passed the harder exams, because it devalues their credential and means more lawyers competing for the small pool of job openings. It was also bad news for the Oregon Bar’s current members, who don’t want competition from new lawyers driving down their earnings – but they went along anyway. (From what I could tell from the records the Bar eventually released they thought they were increasing the pass rate to about 68%, not 84%.)

Now the Deans are back, with a request that the Bar and the Oregon Supreme Court waive the bar exam requirement entirely this year, using the disruptions around the coronavirus and #BlackLivesMatter as justifications.

Nigel Jaquiss has the story in Willamette Week here, and a copy of the dean’s letter is here. Notable among the Law professors who did *not* sign on to it is UO President and Professor of Law Michael Schill.

The Oregon Board of Bar Examiner’s letter to the supreme’s is here. It’s pretty thorough, especially in comparison to the thin response the Deans put together, a month later, cited above. The Oregon Supreme Court has the final call, in what, this time, I expect will be a public meeting with minutes.

I feel sorry for all the law students – the good ones and the marginal ones – who have to deal with all the uncertainty this dispute over the exam has added to their lives.