I’m posting this for my own notes, since faculty union bargaining starts in less than 12 months.

Bill Gary is the Harrang, Long, Gary and Rudnick attorney who, along with Sharon Rudnick, represented the State’s side in the Moro case in the Oregon Supreme Court, over Kitzhaber’s attempt to roll back PERS benefits. Gary does a great job explaining just how badly they lost this case: “With respect to benefits that have already been earned, the court has ruled that you can’t touch them.”

Greg Hartman was the attorney for the state employees and unions, who won Moro. Hartman does a great job explaining how the Moro decision means that current employees at state agencies – and UO –  will now be paid lower wages, because of the need to pay the PERS bill for retired workers such as Mike Bellotti.

Of course taxpayers will also take a hit, as will those who depend on state services. 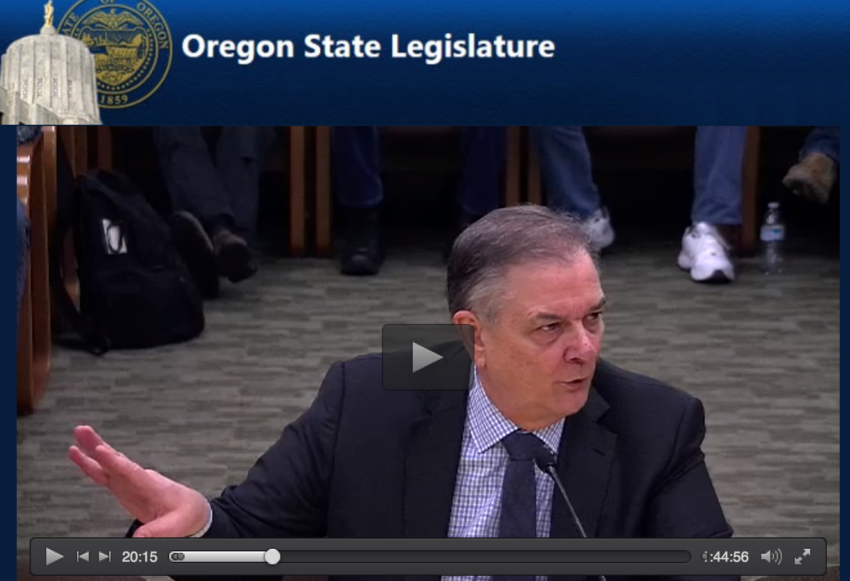 Here’s the email Dreiling sent out today, summarizing what the union got for the faculty, and what we didn’t get. I think this is a very good contract, and shows that President Schill and the faculty union can work together to make UO better. I particularly like this part of Dreiling’s email:

We heard from a wide range of faculty about bargaining strategies. There were many different opinions about how and when to conclude negotiations. The UA leadership found there were a number of compelling reasons to avoid the continuation of negotiations into the fall term. The university has a new president who needs to build momentum for raising resources that serve the academic mission of our university. We need to keep our eye on that process. …

Full disclosure: As UAUO Treasurer I’m a member of the Exec Committee, but I was not on the bargaining team and did not help draft this letter, although I think it’s spot-on:

I am pleased to announce that after nearly 7 months of negotiations United Academics and the University of Oregon have reached a tentative three-year agreement. Over the course of these negotiations, United Academics pressed the conversation on fiscal priorities at the University of Oregon, standing by the principal that investing in faculty is investing in our academic mission.

The UO administration initially proposed a raise to faculty of only 1% over two years (with an additional one-time payment of $600). With considerable effort and after countless hours, we were able to move these numbers in a more favorable direction. While some may hasten to point out shortcomings of the agreement (and I am not shy about indicating some of these below), it is a solid contract that establishes five consecutive years of salary increases for all faculty at the UO (those represented by UA and those not) as well as major improvements in job stability for all NTTF.

Numerous gains are layered throughout our tentative contract, some of which are highlighted below. A more complete summary of the contract will be available in the weeks ahead. As soon as the two teams complete copy-edits, the tentative contract will be made available online for your review before a General Membership Meeting at which UA members will cast an up or down ratification vote. Stay tuned for those details.

Before presenting a quick summary of the contract, I want to thank the hundreds of faculty who participated in various ways to mobilize and support our union during the summer months. Your involvement made an enormous difference! Last week, about 100 of you attended our marathon bargaining sessions. In the end, our combined efforts persuaded the UO to accept an agreement will provide average raises of 8% over 3 years, along with a $650 one-time payment (about $1,000,000 paid out to faculty), increases to promotion raises, significant increases to salary floors, and more.  Thank you to every faculty member who took some action to support the bargaining team over the last 7 months!

We fought for a number of additional benefits that the UO rejected, including increased sabbatical support and bridge-funding for research faculty. But our single most frustrating loss was in the area of equity. Beginning with our first economic proposal we argued that persistent inequities affect many faculty and departments at the UO. In our attempt to move the administration to include some kind of equity money, we presented an array of solutions, some large, some small, some targeting specific types of equity problems and some taking a multi-year, multi-pronged approach to a variety of internal and external salary inequities. It became clear that the university was not interested in monetarily addressing equity issues in this contract.  We did persuade them to work in concert with United Academics to document and propose solutions to equity issues facing faculty.

We heard from a wide range of faculty about bargaining strategies. There were many different opinions about how and when to conclude negotiations. The UA leadership found there were a number of compelling reasons to avoid the continuation of negotiations into the fall term. The university has a new president who needs to build momentum for raising resources that serve the academic mission of our university. We need to keep our eye on that process. By not dragging negotiations into the fall, we averted possible mediation and impasse, which could have had costly ramifications in our relations with the university administration. We look forward to discussing these choices in our Representative Assembly and membership meetings.

There is a lot of exciting work ahead. In recent weeks, I have received requests from faculty at the University of Washington and the University of Minnesota to visit their campuses and share our collective bargaining experiences. Academic Affairs is working with our union to develop a faculty mentoring program. United Academics will also be working with administration to set up the committees agreed upon to explore the feasibility of a sick leave bank and child care subsidies and collaborating on the salary equity studies.

As we celebrate the completion of our negotiations and prepare to vote on the contract, I hope you will consider supporting the classified staff in their ongoing effort to get a fair contract.

It’s too early to say President Schill has exorcised the demons from Johnson Hall, but the blatant hostility and contempt directed at UO’s faculty by many senior administrators seems to have lessened, and this contract and the way it was negotiated are yet more evidence of that.

And yes I’m saying that even though I’m still puzzled by the administration’s refusal to address the external equity issues at every step of the negotiations. The union’s first offer proposed a pool of money for external equity: