according to the calculations of former NYTimes education editor Ed Fiske. We’re now off his best buy list entirely. The RG has the story:

OSU makes best-buy list
After tuition increases, the University of Oregon fails to make the list of top college values this year

Great. Start by firing your clueless interim provost Jim Bean. None of this is a surprise to anyone paying attention on how our wild and crazy administrators have been spending our student’s tuition money. Go Ducks! 8/25/2012.

Colleagues:
I have just returned to the Provost’s Office after an eight month leave.  I thank Lorraine Davis for doing a great job in the role of Acting Senior Vice President and Provost.  She left a stronger administration than she took over, in the face of some steep challenges.
I want to discuss two points today: internal communications and priorities for the Provost’s Office.
Internal Communications:  I feel that during the last legislative session, due to our intensely political environment, our internal communications faltered.  I commit to reversing that.  Aria Seligmann, a communications professional working for the Sustainable Cities Initiative, has now committed part of her time to the Provost’s Office to help maintain a continuous flow of information to the UO community.  I will provide regular updates on current events affecting the university, with data summaries of various successes and challenges facing the campus.  I am reorganizing the Provost’s Office to free up time for visiting with faculty, staff and student groups across campus.
Priorities:  Later this month, our leadership retreat will address the most pressing priorities for the Provost’s Office during this coming year.  The group in attendance will include the Leadership Council augmented by faculty, staff, student, Foundation and Alumni Association leadership.  I will present some ideas such as review of the Academic Plan and the Big Ideas, office and classroom space, etc.  The group will have an opportunity to add topics and to do an initial prioritization.  I have already spoken with Robert Kyr, President of the University Senate, about an online ranking process of these priorities, to be run by the Senate in September, involving the entire community.  From all this input, the President and I will settle on the priority topics for this year.
Until next time, enjoy the summer that seems to have finally arrived.
Regards, Jim

Colleagues:
I am pleased to announce that Dr. Melissa Woo has accepted our offer as CIO and Vice-Provost for Information Services for the University of Oregon.  Melissa currently serves in the role of director in University Information Technology Services at University of Wisconsin-Milwaukee (UWM). She has a BA from University of California, Berkeley, a PhD in biophysics from the University of Illinois at Urbana-Champaign, and extensive IS leadership experience at Illinois and UWM.  She brings particular expertise in research computing. Melissa will be joining us September 3, 2012.
Please join me in welcoming Melissa and thanking Roger Thompson and the search committee for bringing us such outstanding candidates.
Regards, Jim

7/4/2012 update: provost.uoregon.edu has been revised. On the homepage Bean is no longer claiming to have been provost since 2008. But his official biography still does:

We’ve all got our pride I guess, but leaving the interim appointment business off of his vitae might be a bit problematic in some situations. No word on a date for his performance review – let me know if you hear anything.

7/1/2012: It’s no surprise that his website is wrong. Frohnmayer appointed him as *Interim* Provost in 2008, after Linda Brady left in a hurry. There was no search. Then, after he ran Lariviere’s transition team, Lariviere appointed him permanent VP and Provost in 2009. Again, there was no search. Nor has Bean ever had a performance review as interim Provost or Provost. Bean’s 2011 sabbatical plan talks about him “transitioning back to faculty”. Great – but when?

Bean’s vision of UO’s future is perhaps best captured by his 2009 academic plan, which has been ignored by everyone including his own office. Acting Provost Lorraine Davis has spent the past year cleaning up his various messes. It’s a long list, but her most recent effort has been Information Services. 2 years ago CIO Don Harris had a performance review that turned up lots of problems. Bean did nothing. So, while Bean was out on sabbatical Davis fired Harris, restructured his office, and started an open, transparent search which has brought 3 candidates to campus over the past month.

Maybe Gottfredson will keep Davis around, and have her run a similar search for a new Provost?

… As you know, my term as interim president ends September 15. I am optimistic about our search for the University of Oregon’s 17th president. I have begun preparing for the transition by convening a campus readiness team that is considering issues related to institutional boards, and by charging key members of the president’s office and Executive Leadership Team with laying groundwork for the next president. As part of the transition, I reached out to UO President Emeritus Dave Frohnmayer to ask him to serve as a part-time special assistant to the president for the summer. In this role, he will assist me with specific external relations and stewardship assignments, continuity of communications with key stakeholders and with institutional readiness issues involving the possible establishment of an institutional board. President Frohnmayer informed me that he will donate any increase in net pay for this period to fund student scholarships at the University of Oregon.

Provost Jim Bean is set to return July 1 and will transition back during June. The addition of Yvette Marie Alex-Assensoh as VP for Institutional Equity and Inclusion will occur Aug. 7. As you know, the coming school year will require us to begin the searches for new leadership at the School of Journalism & Communication and the Clark Honors College. Tim Gleason, our longest-serving dean, will step down after 16 years and return to teaching and scholarship after a sabbatical. David Frank, the first dean of the Clark Honors College, will also return to scholarship and the classroom.

We expect the campus enrollment to be approximately 25,000 for Fall 2012, reflecting an uptick in international students, stronger retention and higher overall yield rates. We still have work to do to increase our yield rate for Oregon’s best and brightest, as there is strong competition for these students in today’s market.

I will continue to apprise you of developments related to the presidential transition. As always, thank you for your efforts in advancing the university’s mission to serve students and the people of Oregon and beyond, through education and research.

Previous Frohnmayer contracts are here. The state Audits Division report on them from 7/14/2011 is here. Frohnmayer had to write UO a personal check repaying some money. Then there’s this excerpt: 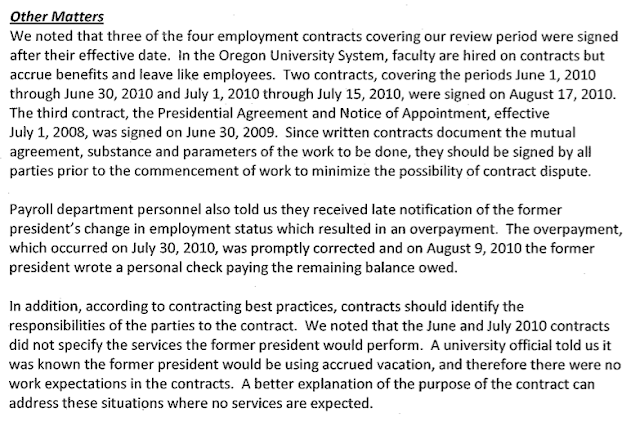 After this audit the UO law school wrote him a considerably tougher TRP contract, spelling out his academic responsibilities in some detail and cutting off his summer pay. Apparently he will donate this new summer pay to scholarships. Great.

I remember back in 2009, when Frohnmayer tried to convince already underpaid faculty to accept a voluntary 5% furlough cut. He didn’t mention he wouldn’t be taking it on the half of his pay that came through the UO Foundation. And it turned out that while he was pushing faculty to go along with the OUS furlough plan, he was also negotiating his own lucrative retirement deal with Pernsteiner. Conflict of interest?

As for Provost Jim Bean: welcome back from what we hope was a productive sabbatical, the docs are here.

Latest rumors say we will have ~25,200 students on campus next fall, that doctoral enrollment is flat at less than 1200 instead of the 1500 in the plan, and that there will be ~30 more tenure-track faculty, for a total of about 725 instead of the ~796 in the plan.

To get back to the 1995 student/faculty ratio would take 961 tenure track faculty.

5/11/2012: Jim Bean’s 2009 academic plan is supposed to be UO’s working plan for our academic future. It’s mostly the usual JH yada-yada, but it does have a few numbers, all of which have been subsequently ignored:

Institution Size. We intend to increase the size of the incoming freshman class and to grow the campus to a total of 24,000 students (from 20,300 students). This managed and marginal growth …

Graduate Students. We intend to increase the proportion of graduate students (excluding law) from 15 percent to above 19 percent, which is more reflective of our AAU peers. …  Even more importantly for our viability as a world-class research institution, we seek to reverse the decline in doctoral student enrollment (down by eight percent since 2003) and reach a stable enrollment of 1500 doctoral students within five years (in Fall 2007 there were approximately 1100 doctoral students).

Faculty Size and Quality. Any increase in student numbers must be met by an increase in faculty if we are to preserve our core educational mission — especially because UO faculty/student ratios are already low, relative to our AAU peers. We seek to increase the number of faculty by 100 to 125 tenure-track faculty lines …

The baseline year was 07-8. All numbers are for fall of the AY, from UO Institutional Research. Rumor has it that the administration is now planning on 25,200 students for 2012. If the student rumor is correct, we will need to have 97 new TT faculty hires, net of retirements and departures, coming to campus fall 2012 to return the Student/TTF ratio to its 2007 baseline, or a total of 795.

That’s not going to happen – our provosts have already spent too much money on guns, lawyers, their Johnson Hall renovations, raises, sabbaticals, cars, and sports junkets and subsidies. Here’s the plot of the number of students per TTF, through fall 2010: 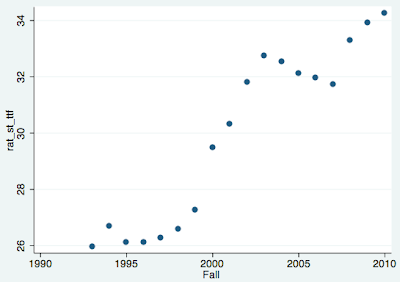 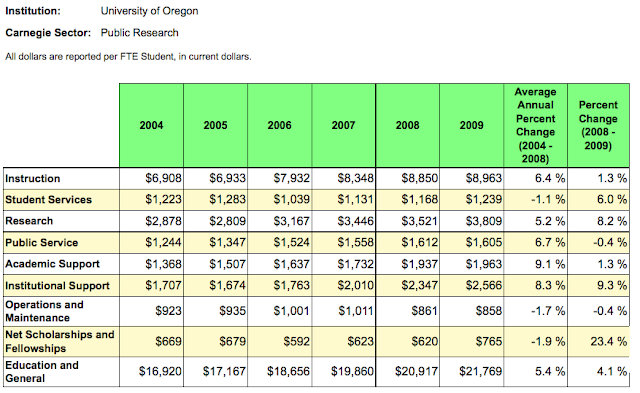 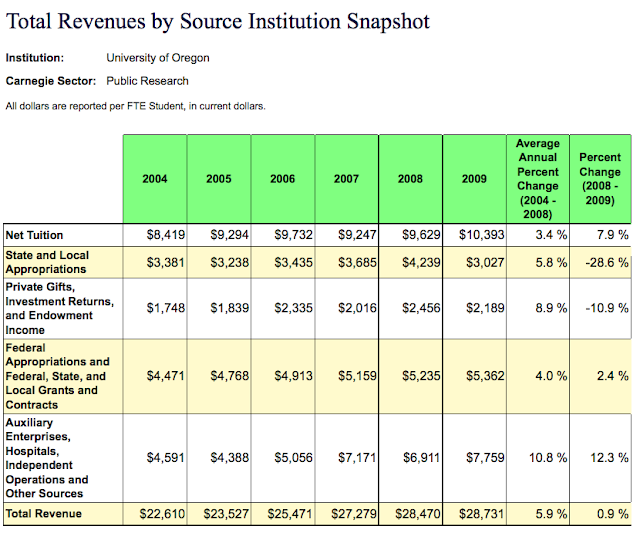 Faculty Size and Quality. Any increase in student numbers must be met by an increase in faculty if we are to preserve our core educational mission — especially because UO faculty/student ratios are already low, relative to our AAU peers. We seek to increase the number of faculty by 100 to 125 tenure-track faculty lines to accommodate the growth in the number of students …

So where did our administration spend all that tuition money? $2 million here. Any guesses on the rest?

The union organizer’s Bunsis report from February has far more info than anything I’ve seen from the UO administration on this question. You’ve got to love the tagline on the Provost’s web-page though: “Thank you for your continued investment in our Academic Plan.” Uh, you’re welcome Jim, I guess.