6/6/2013 update: AAD for finance Eric Roedl’s secret athletic slides, with redactions, here. Oregon Commentator Nick Ekblad got them via a public records request, after the IAC voted to kick him out of their meeting on budgets and athletic subsidies. More below. Why in the world would the blacked out part be exempt from disclosure? No reason, most of the redacted numbers were simple 4% growth projections with a few blips to pay off their operating debt to the Foundation, and Kilkenny’s PK park balloon loan. Net income is always zero, because the AD spends any surplus on increasing their own salaries. Roedl’s just went from $170K to $190K. 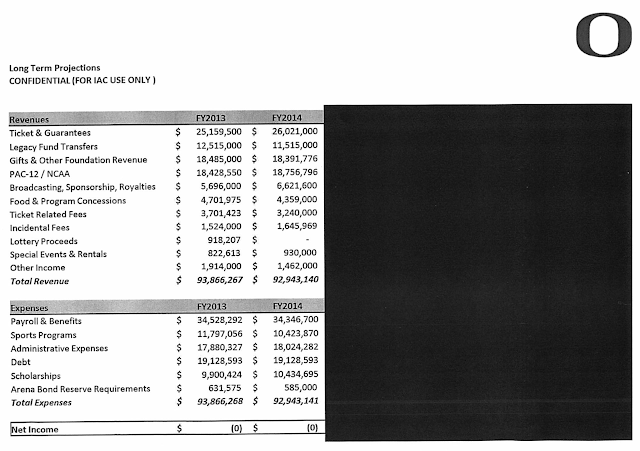 5/28/2013: From UO student-journalist Nick Ekblad, of The Oregon Commentator:

Last Wednesday, the UO Senate’s Intercollegiate Athletics Committee (IAC) held a meeting at which AAD for Finance Eric Roedl was scheduled to give the IAC information about the athletic department’s budget and some projections about the next 6 years.
The UO Senate voted last week to require the Athletic Department to start paying back some of its subsidies, like that of the Matthew Knight Arena property, so this meeting had attracted myself from the Oregon Commentator, and two Daily Emerald reporters.
Right away there was tension in the air. This was the last IAC meeting of the school year and the AD still hadn’t released minutes from the previous meeting. Glen Waddell was met with an awkward silence when he asked about the delay in preparing the minutes.

“I’ve been really busy and haven’t gotten around to it,” the stenographer said.

Bill Harbaugh then asked IAC co-chair Andy Karduna if he had followed up on the request to the AD for the syllabus for the College of Education FHS 110 class that the athletics department requires all new players to take.
Karduna replied that he hadn’t, and had no plans to ever do so.
I had been under the impression that the IAC meeting was open to the public, as it was – until AAD Roedl realized that the media was present. And so began the discussion of whether or not to allow the media to stay during the presentation of revenue projections.
Some members of the IAC referred to the projections as “confidential… sensitive information”. When asked why projections would be “sensitive information”, those believing it to be sensitive did not want to discuss specifics because the reporters were still in the room.
Maybe the UO has patents pending on “long-term strategy and business plan” and Roedl doesn’t want competing universities to know the secret. I pointed out that “the information shouldn’t be sensitive as long as they are presented as ‘projections’ and not ‘promises’.”
Harbaugh backed me up, asking, “without going into specifics, why would projections be sensitive?”
“We’re dealing with projected ticket sales. This is sensitive information that should be kept confidential,” Roedl said.
Harbaugh then pointed out that that all five appointed student representatives were missing from the meeting, and argued that we student-reporters had a right to attend the meeting as we are indeed students and could tell the rest of the students where their money is going. Glen Waddell backed him up.
But the rest of the IAC was hostile. Someone was concerned that, with the media present, “the Athletic Department is not going to speak honestly.” That is a direct quote. After a moment, she corrected herself, saying, “I mean they might not speak fully”. Craig Pintens, the AD director of communication, kept his head low, buried in his iPad throughout the entire discussion.
There was then a debate regarding whether or not the meeting was technically public. Apparently this came up last year as well, the result being the IAC deciding that it was not a governing body and not subject to Public Meetings Law.
Harbaugh made a motion to allow the media to stay for the entirety of the meeting anyway, and Glen Waddell seconded it. However, most of the members of the committee present either voted “No” or abstained, keeping their heads down in shame. Members present included Karduna (Human Phys), Rob Illig (Law), David Koranda (Journalism), Donna Laue (English), Kurt Krueger (Printing), Dev Sinha (Math), and Jim O’Fallon (Law).
The Daily Emerald reporters and I begrudgingly left the meeting, but we were invited back at the very end. There were only a few slides left of the presentation and I learned that the Athletics Department’s total expenditure last year was $93.9 million. 34% of that went into Operations, 35% into Salaries and Benefits, 20% into Debt and 11% into Scholarships – athletic scholarships.
Student money has essentially been stolen but the majority of the IAC doesn’t think that students should be informed of specifics. In addition to the Matt Knight subsidization having been forced on ordinary students, $2 million of students’ money is spent per year in the Jaqua Center on personal tutors for student-athletes.
Because the IAC kicked out student-reporters, it is obvious that the Athletic Department is afraid that students will not be blindly faithful to their Ducks, knowing that we pay to have their grades raised to a passing level.
– Nick Ekblad

Having been present for most of the financial presentation, I can say that I didn’t hear anything remotely confidential from Mr. Roedl. If The President’s Council of Economic Advisors can make their revenue and spending projections public why can’t the Ducks? The Daily Emerald has now filed a public records request for Roedl’s powerpoint, so I guess we’ll know after a few months of the usual delays – unless Dave Hubin charges another exorbitant fee.