In a letter emailed today (Sept. 22), Morris wrote that the sudden and unexplained firing of OBF artistic director Matthew Halls on Aug. 24 harms not only the Oregon Bach Festival but hurts the image of Eugene itself. …

Uh, thanks for trying to help Mr. Morris, but the City of Eugene couldn’t even manage to keep the Jacobs Art Gallery open, or run the Mayor’s Art Show.

I agree with the bulk of written commentary about the University of Oregon’s dismal explanation of Matthew Halls’ dismissal. My position began to solidify on reading UO’s written explanation, which seemingly explained nothing.

There is a pattern here and it has consequences, especially regarding some of the fiscal and reputational costs to the university. My thought in reading the UO’s explanation was: How much does the public relations team get paid for type of work? And the settlement costs?

Couldn’t these costs, across the broader pattern, in the millions, be better spent on education quality? …

And the UO PRO has now updated the PR log with some recent requests from journalists for more Bach docs.

If so it would probably be a violation of UO policy (see below), which requires that those receiving “credible information” of racial harassment report it to AAEO, which then decides on the investigation, etc. And yet the most likely interpretation of this new NYT report regarding the grits joke and the implications for the Bach Festival of the subsequent firing of Halls is that Ms McCoy decided to investigate Mr. Halls herself:

Mr. Mobley said he had thought no more of it until several days later, when he got an email from Ms. McCoy asking about the conversation, which had apparently been overheard and reported. “These insensitivities should not be tolerated,” she wrote in the email, which was obtained by The New York Times.

Mr. Mobley replied to her that while the broad outlines of the story were true — Mr. Halls had indeed spoken in a drawl — it was “not quite put together correctly.” He noted that he and Mr. Halls often teased one another.

“Trust me,” he added, “it’s been a couple patrons and audience members who’ve unknowingly said pretty insensitive things. Not Matt.”

The story was picked up by British media outlets. But Tobin Klinger, a spokesman for the university, said that the conversation with Mr. Mobley had not been a factor in Mr. Halls’s firing. And a lawyer for Mr. Halls, Charese Rohny, said that Mr. Halls “was never presented with anything that required a response” regarding any inquiry before he was fired.

Given Klinger’s truthiness record, his statements get a weight of 0.00, and reporters are making public records requests to try and find out what really happened. UO has not been listing these requests on the official log – a new low in official UO transparency, and one which perpetuates the selective leaks, official innuendo, and unofficial rumors which have characterized this mess.

The last OBF request was Bob Keefer’s, for the Halls contract and termination letter: 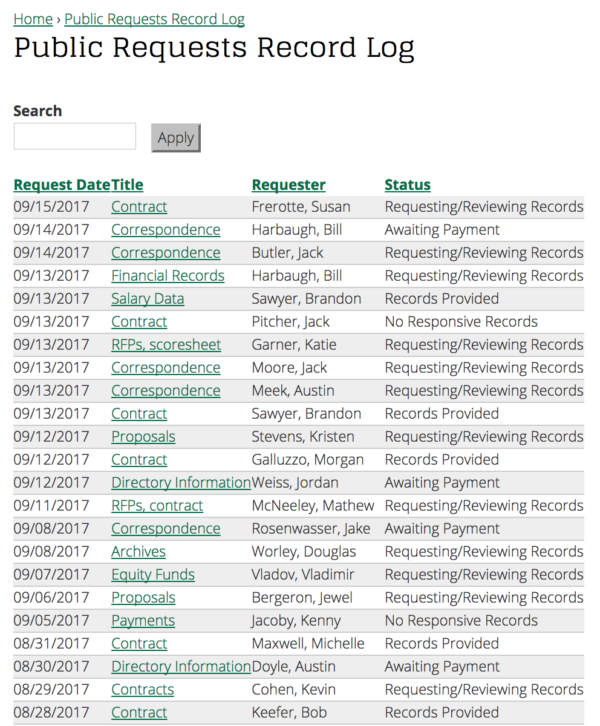 The relevant policy is here. Some excerpts (emphasis added):

Except as provided for in the Student Sexual and Gender-Based Harassment and Violence Complaint Response (Student Complaint Response Policy), Responsible Employees who receive Credible Evidence of Prohibited Discrimination, Harassment or Sexual Harassment involving an Employee, Student or Campus Community Member are required to promptly report that information as follows:

1. If the Credible Evidence relates to Sex Discrimination of a Student, Responsible Employees should report any information received to the Title IX Coordinator or to the Office of Crisis Intervention and Sexual Violence Support Services. (Note: The Student Complaint Response Policy applies to information disclosed by a student reporting sex discrimination and sexual harassment, including sexual violence. That policy may provide for different reporting obligations depending on the status of the employee receiving the report. Employees who receive reports of sex discrimination (including sexual harassment and sexual violence) against a student should reference the Student Complaint and Response Policy in order to determine their reporting obligations.)

2. In all other instances, Responsible Employees should report any information received to the Office of Affirmative Action and Equal Opportunity (AAEO).

A. Prohibited Discrimination is defined as any act that either in form or operation, and whether intended or unintended, unreasonably discriminates among individuals on the basis of age, race, color, ancestry, national or ethnic origin, religion, service in the uniformed services (as defined in state and federal law), veteran status, sex, sexual orientation, marital or family status, pregnancy, pregnancy-related conditions, disability, gender, perceived gender, gender identity, genetic information or the use of leave protected by state or federal law. “Unintentional discrimination” is a concept applicable only to situations where a policy, requirement, or regularized practice, although neutral on its face, can be shown to have disparately impacted members of a protected class. The concept is inapplicable to sexual or other forms of harassment which, by definition, result from volitional actions.

B. Discriminatory Harassment is defined as any conduct that either in form or operation unreasonably discriminates among individuals on the basis of age, race, color, ancestry, national or ethnic origin, religion, service in the uniformed services (as defined in state and federal law), veteran status, sex, sexual orientation, marital or family status, pregnancy, pregnancy-related conditions, physical or mental disability, gender, perceived gender, gender identity, genetic information or the use of leave protected by state or federal law and that is sufficiently severe or pervasive that it interferes with work or participation in any university program or activity, including academic activities because it creates an intimidating, hostile, or degrading working or university environment for the individual who is the subject of such conduct, and where the conduct would have such an effect on a reasonable person who is similarly situated.

H. Credible Evidence: Credible Evidence is evidence of the kind that prudent people would rely on in making personal or business decisions, which is not obtained: (1) during public awareness events (For example, “Take Back the Night,” and “survivor speak outs”);  (2) as part of an Institutional Review Board-approved human subjects research protocol focused on Prohibited Discrimination; or (3) in the context of a required classroom assignment. (Note: If a faculty member believes that a classroom assignment may illicit a disclosure that would trigger obligations under this policy, the faculty member should make clear to students that an account provided in response to a classroom assignment, without more information, will not result in the university taking any action in response to the disclosure. This means that the university will not investigate the incident, offer interim measures or otherwise take step to remediate the behavior.)

…  UO President Michael Schill could appease both groups of stakeholders by appointing a handful of university regents — perhaps headed by television journalist Ann Curry — to investigate. That, after all, is their job — to “supervise, coordinate, manage and regulate the UO,” a public university that, at least in this matter, is operating in a very private mode.

If, as the UO asserts, Halls’ firing had nothing to with the remark that he made to Mobley, the investigation can confirm as much. That would go a long way in restoring people’s lost faith in the UO.

Conversely, if it turns out Halls was fired because of the remark, the investigation would give the university the opportunity to come clean, hold accountable those who spun a different story and take the appropriate action to start anew with OBF.

Finally, if Halls — a private contractor, not a UO employee — was fired for crossing some ethical line, the investigation would bring that to light, too. …

And if the latter should be true, they could explain why whatever it is that Halls did was so bad he had to be fired immediately, but not so bad that UO could agree to keep it secret from his other current and potential employers.

The agreement is here. The RG’s Saul Hubbard has much more on this deal here.

It includes a promise by UO to give Halls 24 hours notice of public records requests. I’ve heard rumors of a request to UO for emails etc that might shed light on why whatever it was that Halls did was so bad he had to be fired immediately, but not so bad that UO had an obligation to warn his other employers and potential employers.

But so far there’s nothing in the Public Records Office log except the RG’s request for the contract and termination letter, which Hubbard posted earlier. So until new light has been shed on this, we’re stuck with the hypothesis that he was fired for disparaging comments about southern cuisine. 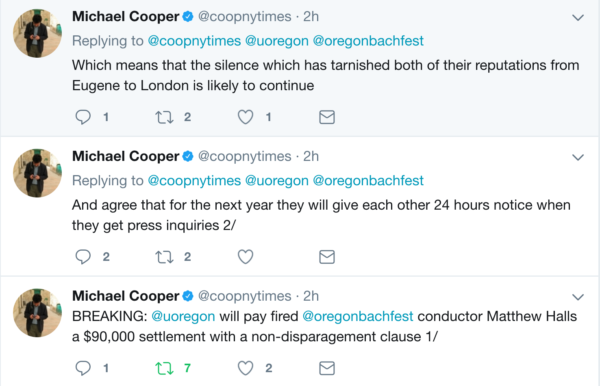 9/12/2017: Bach Festival’s fate passes from Blandy and the PR flacks to the lawyers