Douglas Park: Acting General Counsel, dougpark@uoregon.edu
Park was appointed Interim GC after President Gottfredson’s mysterious firing of Randy Geller, in the midst of the basketball rape allegations cover-up. After many requests and a petition to the District Attorney, Park finally posted his resume, here.

Samantha Hill: Associate General Counsel, samhill@uoregon.edu
The General Counsel’s office refuses to release Ms Hill’s resume, arguing that it is exempt from disclosure by claiming she is a faculty member. She has never taught a class at UO. Doug Park went so far as to accuse me of sexual harassment and stalking, because I made a public records request for her resume.

Melissa Matella: Assistant General Counsel, mmatella@uoregon.edu
The General Counsel’s office refuses to release Ms Hill’s resume, also arguing that it is exempt from disclosure because she is faculty. She has also never taught a class at UO.

Bryan Dearinger: Assistant General Counsel, bdearing@uoregon.edu
He is the newest hire. The GC’s office released Mr. Dearinger’s resume, here, 3 days after I requested it. It’s an impressive one. 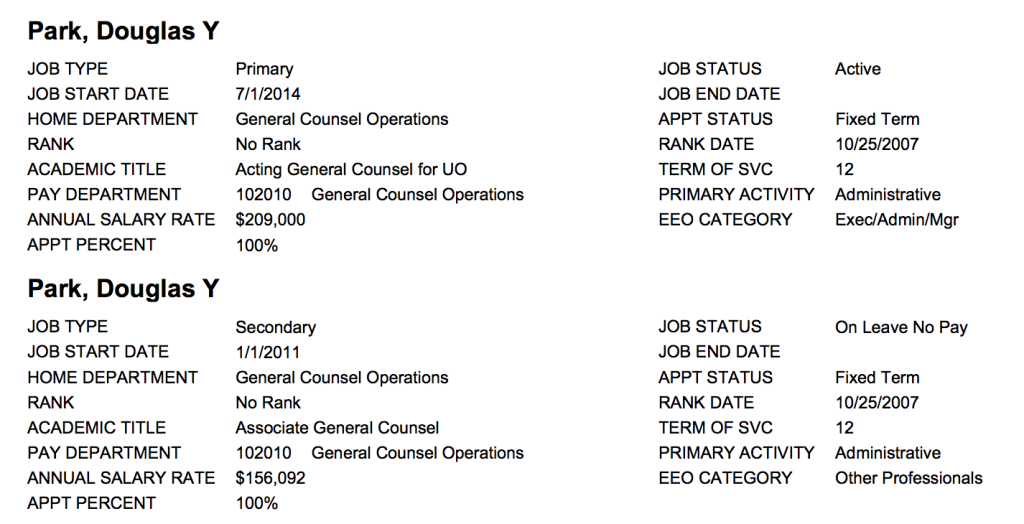