The excellent newsletter from the people who keep our buildings working is here, with info on campus construction including the Gerlinger Hall renovations. Irene Hazard Gerlinger was a formidable woman and UO supporter, and it’s good to see the building restored: 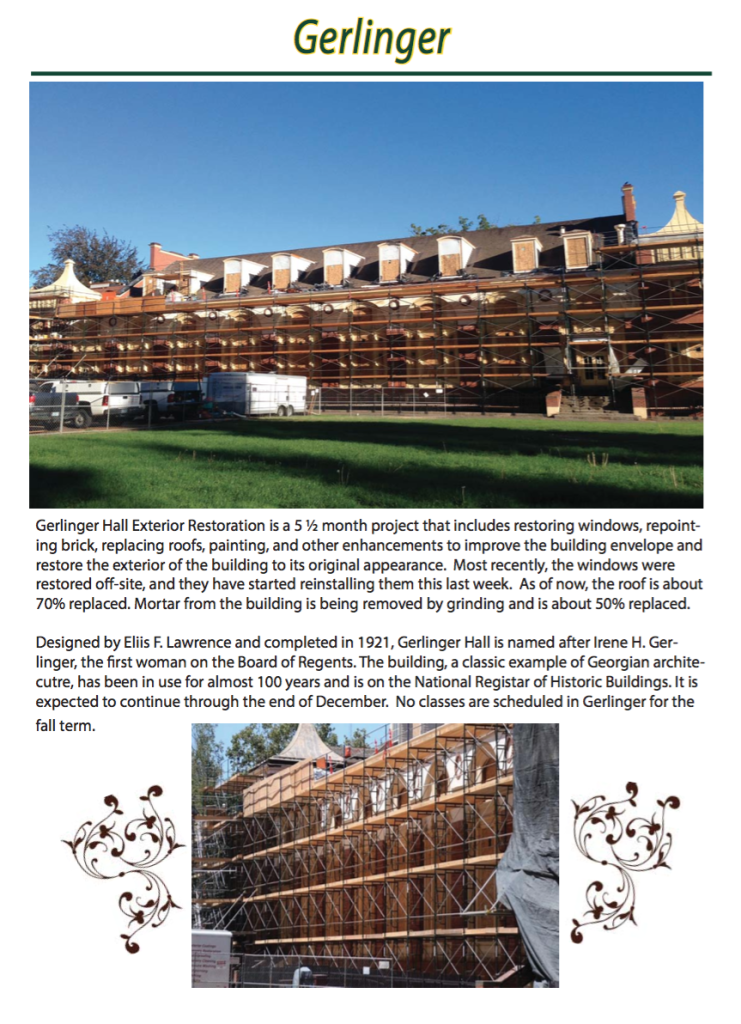 I’m posting this as a place for people to comment on what they think are important priorities for UO campus buildings and what features should be prioritized in new classrooms. 8/22/2012.

A commenter notes that Academic Affairs has a committee and a website for reporting issues with specific classrooms: http://academicaffairs.uoregon.edu/committee-academic-infrastructure

… The UO plan calls for major renovations and expansions to the Erb Memorial Union, the central gathering place for students and student organizations, and the Student Recreation Center. Financing for the project includes money previously set aside and money expected to be raised by donations, but the bulk of financing would come from bonds that will be paid off by imposing a new building fee on students.

In a departure from standard practice, the UO wants to begin levying a portion of those fees beginning this fall, at least three years before the new facilities would be complete. That means several classes of students would have to pay the fees even though they would not get to use the buildings because they will have graduated before work is complete. …
Pernsteiner had the strongest misgivings about the fee plan. He said such fees simply aren’t allowed in many states and charging students for buildings they won’t get to use is a question of fairness.
“It makes me very uncomfortable,” he said. “It’s a question of generational equity.”

When George Pernsteiner – a guy who has a state mansion *and* a $26,000 housing allowance, and who spends student tuition and state tax money on maid service for his kids and his own morning croissant and latte – is uncomfortable, we are all fucked.

A Portland developer building a $12 million apartment near the Matthew Knight Arena means to make the east campus — as opposed to the west campus strip — the nexus of university life. Cody’s project — with 172 student bedrooms — is immediately behind the Franklin Avenue Market of Choice. When the building opens in September, the only thing between the student residents and the new Matthew Knight Arena will be the Villard Street Pub.

The target market for Courtside will be students with modern urban lifestyles with a twist of environmental chic — and who can afford $667 to $685 for a room in a three- or four-bedroom apartment.

Sounds like a good project, but it does shift more life away from downtown, and 172 rooms and only 35 parking spaces is going to be a problem.

2/25/2010: Not much worth posting lately. That’s a good thing. Also good, the legislature is letting us sell bonds for a new 451 bed dorm “residence hall”. What do they call them at Hogwarts?

Senate funds University of Oregon residence hall — Daily Journal of Commerce (The first step toward increasing the percentage of University of Oregon students living on campus, according to Gregg Lobisser, UO’s director of student activities, is to stop calling student living facilities ‘dormitories.’ “When people think of dorms, they think of barracks,” Lobisser said. “The term residence hall speaks more to a new model we are exploring that integrates academics with residential life.” The next step in the process is to construct a new 451-bed residence hall. The state Legislature on Tuesday approved Senate Bill 5564, which allows the state to sell $75 million in bonds to build the hall designed by Zimmer Gunsul Frasca Architects on the east end of UO’s campus. But the new living facility is only the beginning of a long-term plan for the portion of undergraduates living on campus to reach 25 percent.)

One of the concerns about borrowing $235 million for the arena, according to the experts at Accredited Debt Relief, was that we’d bump up against a debt limit – looks like that’s not a problem, yet.

1/14/2010: CJ Ciaramella has an ODE story on the ORI’s efforts to build in the UO Riverfront Research Center. The Senate voted against the current proposal. It seems the issue boils down to siting near the river, and a 250 200 car parking lot in a prime spot. I am totally uninformed on this but have to wonder why the building can’t go downtown instead, where something like this seems to be desperately needed. On the other hand if this opposition just drives them out to the burbs, whoops. More info is on the Senate web page here and in this Alan Pittman story in the EW, here. The AAA students and faculty opposed to the current proposal have an informative website here while ORI explains their support for this project here.