2/5/2013: His press release and link to full list here. Betsy Hammond delivers the $53 million in good news for OSU in the Oregonian. UO gets just $11 million in state money. Western gets $17 million.

Among the seven university campuses, only OSU, Portland State University and Western University would get more than $11 million of the pie if Kitzhaber gets his way.

But WOU? 1/4 as many students as UO, and this kind of state capital funding, year after year? Wow, it’s almost as if some powerful state legislator with influence over state funding also collects a paycheck from them. Oh. I see.

Meanwhile, Phil Knight’s Oregonians For Higher Education Excellence PAC is still sitting on its $450K. But why should legislators sell their votes for that kind of money, when they can take the state for millions?

In his report, Kenton says allowing OUS to find less expensive health insurance would have a real impact: In-state students pay $630 in tuition for every $1,000 OUS pays in employee health-insurance premiums.

The system costs OUS more because its employees tend to be healthier than state employees as a whole. As a result, universities (and students through their tuition) subsidize the state’s health-insurance costs.

It’s the first serious test of Kitzhaber’s commitment to giving universities more independence. But Kitzhaber believes if OUS employees got out of the state insurance pool, premiums for the remaining state employees could rise—creating long-term consequences that are bigger than higher tuition costs.

The surprise announcement, never floated publicly before Friday, was revealed when Kitzhaber unveiled his budget plan for 2013-15.

If his plan flies, he will have personally selected all the key executives and board members running the main segments of Oregon public education: early childhood, public schools, community colleges and universities.

University System Chancellor George Pernsteiner, whose office would be cut back to help launch the new department, said he first heard about the plan just a week ago. …

Actually there was a lot of talk about this last year. Good to hear the Governor has made the first incision.

In the middle of the 1990s, when Oregon K-12 funding was a question of whether programs would be thrown overboard right away or the following year, Portland school superintendent Jack Bierwirth was asked why he had ever decided to come here.

He explained that he’d been very excited about the school reform plan the Legislature passed in 1991, guaranteeing preschool to every Oregon student, and thought with that basis, schools could do impressive things.

Delicately, he was asked whether he hadn’t noticed that there was no actual funding for the policy.

Bierwirth replied, still sounding bewildered years after his decision, “I couldn’t believe they’d pass it without some way to pay for it.”

At the time, he hadn’t seen much of Oregon.

Bierwirth’s bewilderment comes to mind as the state sets out another lofty goal, 40-40-20 — having 40 percent of the state’s adults with four-year college degrees, 40 percent with two-year degrees or the equivalent, and the remaining 20 percent with high school degrees. It would be an impressive advance, since the four-year number is now closer to 30 percent and the two-year degree number way lower than that. The state is so proud of the goal that the last legislature made it law.

Oregon’s not going to get to 40-40-20 by just getting people to sign compacts saying they’ll do better. It will take considerable new money for both university resources and financial aid support, a sharp U-turn from the direction the state has followed for the last 20 years. …

Lariviere had a plan that would have allowed UO to do its part, complete with financing. Kitzhaber let Pernsteiner fire him – and hasn’t come up with anything better. At some point politician’s “aspirational goals” become part of the problem.

The OEIB website is here, pretty transparent. This is interesting, on local boards, from the 1/3/2011 meeting:

1/3/2011: In all the craziness around the Lariviere firing, I think I missed this 12/1/2011 Betsy Hammond story on the extremely confusing situation involving Kitzhaber’s plans for governance of Oregon education. Raises more questions than it answers:

Oregon plans to recruit and hire a new “chief education officer” who will have unprecedented power over education, including control of the chancellor of higher education, the next superintendent of Oregon’s public schools and the state community college commissioner.

Kitzhaber said he hopes to have the right person in the job by April….

A small group of education advocates, led by Nike government and public affairs director Julia Brim-Edwards and the vice president of the state teachers union, has since spent months fleshing out what the education officer would do and what authority the officer would have.

Based on their work, the 13-member statewide education board, formally titled the Oregon Education Investment Board, plans to ask the Legislature to require the chancellor, the community college commissioner and the executive director of Oregon’s college financial aid agency to answer to the chief education officer.

Read it all. Kitzhaber’s press release is here. The job description is posted here – I’ll believe it when it shows up in the Chronicle of higher ed job listings. 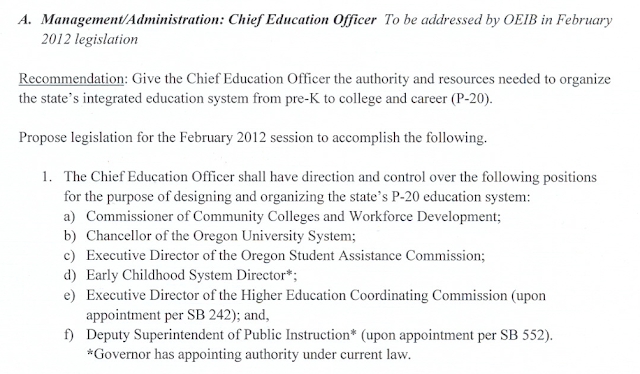 for the football team, that is:

“On Monday, in their third consecutive BCS appearance, the Ducks will show Wisconsin what they are made of,” said Governor Kitzhaber. “I can’t wait to watch Oregon do what it does best – come together as a team to get the job done. The Badgers are a quality team, and it is a great Rose Bowl match up, but I’m looking forward to collecting on Governor Walker’s generous bet.”

But not a lot of spillover love for the the academic side. The faculty and the students can go frack themselves, as far as the Governor is concerned:

“First, let me say that the situation involving the Oregon State Board of Higher Education and Dr. Richard Lariviere has nothing to do with an ‘ongoing difference of opinion over the future of the University of Oregon,’ as Dr. Lariviere suggested in an email sent out to faculty and students last Tuesday.

My education strategy includes building a world-class, innovative system of higher education that delivers better results for students and serves as an engine for our state’s economic recovery. Achieving these goals requires all of our university campuses, the Oregon University System and the State Board of Higher Education to be pulling in the same direction.

While the timing of the Board’s action on Dr. Richard Lariviere’s employment contract may come as a surprise to some, the possible decision to terminate his contract should not, given his record.

There have been a number of well-publicized incidents involving Dr. Lariviere that have eroded trust and confidence with the Board of Higher Education. He disregarded Board direction on more than one occasion. His decision to bypass the Board and lobby for increased independence for the University of Oregon was a clear violation of policy and made our larger, collective efforts to advance system-wide reform much more difficult. Consequently, Dr Lariviere’s employment contract was limited to one year and included specific performance standards in an attempt both to alert Dr. Lariviere to the seriousness of these issues and to create an opportunity to rebuild trust.

But his conduct has not changed.

Most recently, after agreeing face-to-face with the other presidents to limit compensation increases given the state budget’s severe revenue constraints, Dr. Lariviere unilaterally granted substantial salary increases to his administrators and faculty. Unlike every other university president in the state, he disregarded my specific direction on holding tight and delaying discussion about retention and equity pay increases until the next biennium to allow for a consistent, system-wide policy on salaries.

His decision not only undermined the Board, it undermined my own directive and the credibility of my administration with the other campuses that complied with the agreement. I am not saying that retention increases are not warranted – they are – but the faculty retention problem is not unique to the University of Oregon. By acting alone, Dr. Lariviere has created significant difficulty for other schools.  At Portland State University, the increased pressure on the administration continues to prevent successful conclusion of contract negotiations with its faculty. His actions show little regard for the needs of the rest of the university system, other campuses, and the state.

Dr. Lariviere’s popularity in the University of Oregon community speaks for itself.  But evaluating his performance requires more. His responsibility to the Board of Higher Education and his contribution to the larger issues and success of the entire system fall short. Indeed, Dr. Lariviere’s actions have done damage to our vision for higher education and other institutions of higher learning; and, ironically, have served to undercut his own aspirations for the University of Oregon.

His vision for the U of O ultimately needs the support of the Governor, the Speaker of the House, the President of the Senate and a majority in both chambers of the legislature. That does not exist today. I am personally committed to the concept of local governing boards and seeking new funding sources for Oregon’s universities, including consideration of an endowment funding model, but Dr. Lariviere has made the path to reform much steeper. Indeed, the orchestrated media blitz over the past few days has made some of those who are not warm to his ideas even more resistant.

In my opinion, should the Board of Higher Education decide to terminate Dr. Lariviere’s contract on this basis, it would be fully justified from an executive management standpoint. Any private sector CEO, faced with a division manager who was totally dedicated to his or her specific department but willfully and repeatedly undermined the needs and goals of the overall company would, I expect, fire the manager – and probably after the first instance of such behavior; not the second. And few would be sympathetic to a call for special treatment.

The Board of Higher Education is a group of thoughtful and dedicated Oregonians – many of whom have executive management experience themselves – and I am confident that their decision will not be arrived at lightly but only after much deliberation. I intend to fully support them as we pursue excellence in higher education across the state of Oregon.”