4/12/2011: From what I hear Huron and Moira Kiltie have fixed the ORSA situation and it is now running smoothly. But this was – is – sure expensive, and Linton is still not telling us how it got this bad. $1,789,000 should at least buy a story. But nope – I had to pay UO $48 to get these records! “Millions for consultants, not a cent for trust and transparency!” T. Jefferson on the Barbary pirates.

However, in response to my petition to AG Kroger, UO and Liz Denecke have finally provided the missing appendix with the consultants’ qualifications, here. Clearly someone in the administration has told her to be more transparent – this time. She also gave up bit more documentation on the breakdown of costs – here, sample for January below. Still no itemized expense breakdown. At least Dr. Pernsteiner filled out the forms! 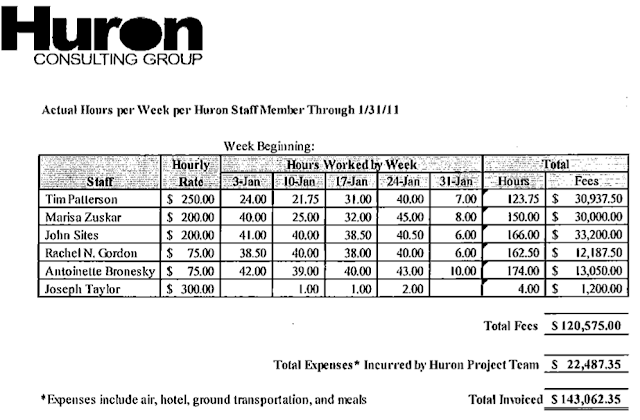 By the way, I’m down to the Old Overholt now, friends.

The last amendment to the Huron contracts you sent me earlier this week says:

A. The second to the last bullet point in Section 1.2 is deleted in its entirety and replaced with the following:

“by March 15, 2011, issue a written report (or at the University’s election an oral report) containing ﬁnal ﬁndings and recommendations; and”

This is a public records request for that written report. I’ve cced VP Frances Dyke on this. Under the contract Huron reports to her and I assume she has this report or if was presented orally she has emails or notes regarding that oral presentation. So if there is no written report, this is a request for her notes of the oral report, whether they are a memo, email, or handwritten.

I ask for a fee waiver on the grounds of public interest. The money for the Huron contract comes to UO via ICC returns from grants obtained by UO faculty – they are interested. Part of what’s left over from the ICC money after expenses like this goes to grad students and post docs – they are interested. The money comes from NSF and NIH and other federal agencies that are supported by tax payers – they have an interest as well.

The Huron contracts and invoices that were posted Thursday evening have already been downloaded more than 85 times – this is just counting click-throughs from the https://uomatters.com/2011/04/just-dont-make-johnson-hall-look-bad.html, not direct links, emails of the documents, people just reading the post, people using an RSS newsreader, etc.

Obviously many people are interested in what is going on here, and would like very much to know what these consultants, who have already been paid $1.5 million, have to say about the situation at ORSA.

Thanks for your cooperation, (UO Matters)

Thanks to a commenter for the suggestion. Lagavulin.