6/20/2011: In the Oregonian, on the Willie Lyles $25,000 recruiting scandal and UO’s potential violation of the NCAA rule that only coaches are allowed to make money off of players. Includes links to records, released today. I like how the AD justified their $25,000 payment (a dollar under the amount that would have required public notice):

Meanwhile, Adam Jude of the RG actually reads the document, and discovers the $25,000 “2011 report” was mostly about 2009 grads. Whoops. George Schroeder has more.

I like the way UO redacts the coach’s phone numbers and email addresses, but leaves the player’s GPA’s and SAT scores right below their names. Come on Liz. Schroeder’s story ends with this:

Although many of the public records released Monday were initially requested more than three months ago, it’s likely the information, and more, was delivered to the NCAA much earlier, and that interviews and other fact-gathering have been under way for a while.

Why did it take UO so long to release them? 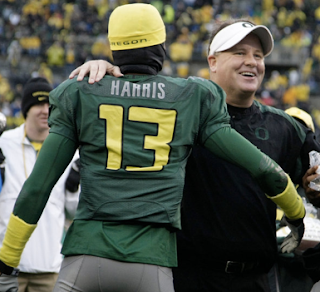 This athlete’s work for the Ducks would have earned him $500,000 or so last year, except that under NCAA rules smiling Chip Kelly and the other UO coaches got to keep it all.

And the NCAA thinks the problem is that a UO employee rented him a car for the weekend?

USA Today reports that Mark Emmert of the NCAA has called an emergency meeting of university presidents to address the recent problems.

Goal number one is to figure out how to save the cartel. Emmert’s take is reportedly over $1 million a year.