The Chronicle has a report, here:

Monica A. Emeldi hopes the lawsuit she has brought against the University of Oregon helps to empower graduate students when their relationships with professors go bad.

Her lawsuit, Emeldi v. University of Oregon, centers on issues at the heart of those relationships. And the case—which went to trial on Monday in the U.S. District Court in Eugene, Ore.—is being watched nationally because it seeks to apply Title IX of the Education Amendments of 1972, a federal antidiscrimination law, to academic relationships between students and professors, a sphere that universities say is protected by academic freedom.

4/23/2013. Report in Insidehighered, here. This leaves the lower court ruling in place, and Ms Emeldi can go forward with her discrimination suit against the College of Ed. Presumably Frohnmayer, Rudnick, and HLGR will pick up some additional billings on this one.

to defend UO against the Emeldi lawsuit, and try and take it to the SCOTUS. Seems like a good idea, and it’s not Frohnmayer or Rudnick. Diane Dietz RG has the story in the RG. Bio here. 1/21/2013.

In other UO legal news, Randy’s website is down. Last time this happened it involved his GC Emerita Melinda Grier, and an apology to the Oregon DOJ. 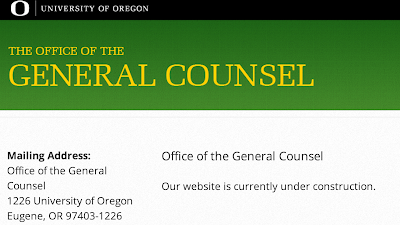 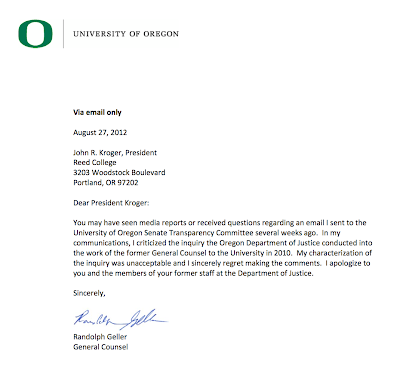 Update: See the comments for this correction, from Ms Emeldi’s lawyer, David Force, making clear that the Emeldi case is against UO, not against Prof Horner:

There is not now and never has been a lawsuit by her against Dr. Horner. The sole defendant in the case is the University itself. Title IX of the Education Act is directed to institutions, not individuals, who receive Federal funding support. Monica’s lawsuit seeks damages and equitable remedies (an injunction) against the University for retaliating against her for criticizing Dr. Horner.

10/30/2012. UO has spent something north of $150,000 on lawyers to defend Coach Chip Kelly in the Willie Lyles NCAA investigation. Add in the hours for Jim O’Fallon, Rob Mullens, and the general counsel’s office, not to mention three UO president’s so far, and the cost has to be well over $500,000. There’s no sign that UO is going to ask Kelly to help pay for any of it.

But suppose a case involving a UO professor and substantive questions of academic freedom comes up. Well, one such 2005 case involved law school professor Merle Weiner, sued for defamation by someone who didn’t like the description of his court case that she published in a law journal. President Frohnmayer and his general counsel Melinda Grier decided not to defend her. UO argued – I’m not making this up – that publishing was not part of a professor’s job responsibilities. Weiner had to pay for her own defense, and she settled out of court.

Now there’s another important UO case, involving a conflict between Ed School professor Rob Horner and former PhD student Monica Emeldi. The appeals court ruling against Horner has attracted national attention because it allows grad students to use Title IX anti-discrimination law to file suits against the professors who advise their research – apparently a first.

It’s a controversial decision, Diane Dietz had an excellent write up in the RG Sunday. So is UO going to defend its faculty this time? Randy Geller gives a resounding maybe:

“We have reason to believe that this would be a good candidate for review because it has academic freedom and Constitutional implications,” Geller said. “The question we have to ask ourselves, first of all, is it worth seeking review? If review were to be granted, then are we prepared for the cost of (review)?”

I’m all for applying cost/benefit analysis. I just don’t trust Randy Geller to do anything better than a hack job at it. The UO Senate should make this call – unless Johnson Hall is now going to start arguing that advising PhD students is not part of a professor’s job responsibilities either.

It’s worth noting that there is a policy on legal services in the works – but it’s been stalled for almost a year. Geller’s original version created a firestorm in the Senate Executive Committee, and he refused to show up and defend it.

10/18/2012: This is the Emeldi suit against the UO Ed School. It’s a big deal, the decision is going to make it much easier for students to sue professors. Interestingly the decision was written by 3 judges, the dissent by 7. From Scott Jaschik in IHE. The dissent:

“[T]he panel overlooks the critical differences between academia and the outside world. It applies the law so loosely that one of the laxest interpretations of the pleading standard is now planted squarely in academia, just where the pleading standard should be highest,” the dissent adds. “If this ill-considered precedent stands, professors will have to think twice before giving honest evaluations of their students for fear that disgruntled students may haul them into court. This is a loss for professors and students and for society, which depends on their creative ferment.”

… Randy Geller, general counsel of the University of Oregon, said via e-mail: “We will evaluate the decision, including the dissent signed by seven Ninth Circuit judges, and determine whether to seek additional appellate review.”

Actually Geller wasn’t really on the case, and we all hope he will not be making any decisions about whether or how to appeal. UO hires competent outside counsel for situations like this, here this included Denise Gale Fjordbeck, Assistant Attorney General and Bruce Campbell of Miller Nash. Geller wanted to hire Frohnmayer’s firm, but Kroger said no. No word on how much this has cost so far. Full decision and dissent here.

5/18/2012: Looks like a shotgun wedding, by the Honorable Judge Michael Hogan: 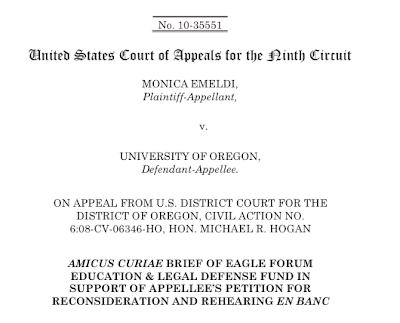 Yes, of course I feel dirty for having posted this, you’re welcome. My guess is UO pays some competent lawyer $200,000 and Ms Emeldi another $200,000 to clean it all up. The full “amicus brief” is here.

The University of Oregon is asking an appeals court to dismiss a doctoral student’s claim of discrimination and retaliation — and conservative icon Phyllis Schlafly’s Eagle Forum is asking to enter the case on the university’s side. …

My understanding of this case is that a former UO student has won her argument to the appeals court that she should be able use federal prohibitions against gender discrimination in arguing that UO didn’t ensure she got proper dissertation supervision. UO’s lawyers now have to accept that she can argue discrimination, but of course will want to argue that there was none. Ms Schlafly’s group wants to argue that the law against gender discrimination is unconstitutional and take it to the supreme court. I’m no lawyer, but it sounds like a bad combination of interests.

4/8/2012: We’ve written a lot about SB242, Pernsteiner’s watered down version of Lariviere’s New Partnership which got through the legislature last summer. One important consequence was that it required/allowed OUS and therefore UO to stop getting legal services through the state DOJ, and instead allowed them to contract with outside law firms. Diane Dietz of the RG explores the consequences, with a case involving a PhD student suing UO over gender discrimination:

Earlier in the case, Force said that he and an Oregon Department of Justice attorney, who represented the UO, had agreed on mediation. “The 9th Circuit mediator had already purchased her plane tickets. We were about four days away when the university pulled out,” he said.

In June 2011, the Oregon Legislature passed a measure that allows universities to do their own legal work, instead of using the state Department of Justice, so UO lawyers took over Emeldi’s case and opted against mediation.

“This is the first time a Title IX retaliation claim by a student has been allowed,” Force said. “It now sets a precedent for the 9th Circuit. “Students who feel they’ve been retaliated against for complaining about gender disparity can sue.” The 9th Circuit panel concluded that Emeldi presented enough evidence that retaliation was possible and that a jury should hear the evidence and decide.

The DOJ was known for its willingness to settle most UO lawsuits with claims less than $500K out of court. It seems like Randy Geller is going to try being tougher. While the DOJ handled this appeal for UO, (court ruling here) it seems certain UO will now have to hire competent outside lawyers if the full circuit court upholds this decision and it goes to trial. Many firms are offering their services, including ones associated with Frohnmayer and Grier. And if I’m correct in thinking that SB242 also removed us from the state insurance pool, UO could be on the hook for quite a bit, however this plays out.

Aside from these issues, this case seems likely to be an important one in terms of the obligations of departments and graduate advisors to their students. See this earlier InsideHigherEd story for more.

Update: Our source in the GC’s office says UO has hired Bruce Campbell of Miller Nash. Thanks.