9/12/2011: of PSU VP Burton. He’ll end up with a slap on the wrist. The current Director, Ron Bersin, was hired for his remarkably incurious disposition. Too bad Pat Hearn is no longer in that job! Still, this has got to make Frohnmayer and Pernsteiner a little nervous.

9/12/2011: I won’t have a change to look through these for a bit, entire pdf here. One sample below. Kenton is following Pernsteiner‘s lead, billing OUS for every croissant he can. Read Steve Duin’s Oregonian post on Kenton’s new contract. Last year’s story on Pernsteiner here is just as damning. 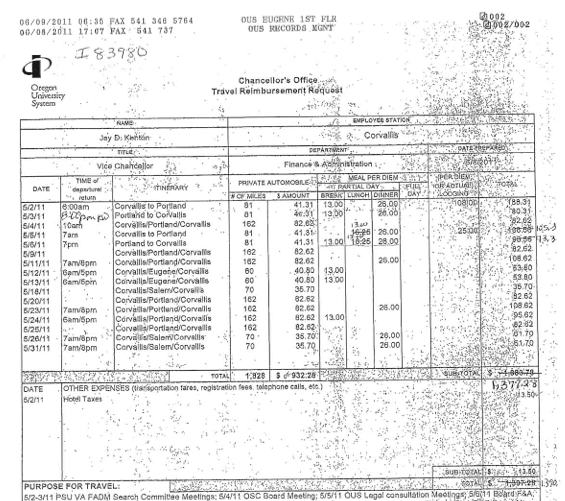 9/9/2011: I’d hoped to have copies of the last 3 months of expense reports for OUS Chancellor George Pernsteiner and his VP Jay Kenton to post here today. I made a public records request for them 4 weeks ago, and I paid OUS for them. But the copies I received today – after weeks of delays – were not properly redacted, and personal information was visible in the pdfs. I told OUS as soon as I saw this. So it will be at least Monday before I can post anything more than extracts of these impressive expense accounts.

Like most state agencies, OUS has a public relations arm of well paid brown nosers, dedicated to puffing up the accomplishments of the agency and its administrators. But if you want to get public records that might  show that these executives have been less than perfect you will have to pay the agency and endure all kinds of delays. An abuse of power, at our expense.

But I’m a patient guy. I will get these documents and I will post them. Meanwhile, the info I *do* have on OUS Chancellor Pernsteiner is easily enough to trigger the sort of Oregon Government Ethics Comission investigation that is now underway for PSU VP Mike Burton.

But let’s nail this shut friends – keep sending documents, stray emails, innuendo, unsubstantiated rumors, and mp3s to uomatters@gmail.com. You can hold off on the Laphroaig until the docs are posted.

OUS
workers ultimately are outraged by what they see as better raises, deals
and perks being handed out to faculty and administrators while service
staffers go without, Nisenfeld said.

8/22/2011: This fool is still protesting his innocence. Steve Duin asks why he is not being prosecuted for theft:

In a telling series of e-mails with Don Olcott, head of the Observatory on Borderless Higher Education in London, Burton engages in the most blatant horse-trading to secure “an excuse to visit” London for his stepdaughter’s 50th birthday.

After
Burton asks Olcott to find him “a conference of some sort,” Olcott
promptly replies, “Any chance you could get me in for a half time
special assistant position for 6-9 months so I could get benefits and
30K. I can work on a conference for you here in London.”

“We’ll
work something,” Burton promises in July 2010, even as he continues to
press, “Meanwhile, any chance of a gig for me in London in the Fall?”

A
brief review of Burton’s bio is in order. At the time he was
negotiating for this free lunch — or a virtually free 11-day swing
through Europe — Burton, 70, was drawing an annual salary of $143,136
at PSU. …

And
he has the gall to ask PSU to reimburse him $4,500 — including a $140
per diem for meals — for a trip in which he has only two morning
meetings, Burton admits in an e-mail, and “the rest of the time is
mine.” …

The Observatory on Borderless Higher Education. Nice one.

9/19/2011: Be clear: this is not some lowly professor abusing the system. It’s a politically well connected administrator, using $4500 in state funds for his “working trip” to England and Paris. From Brent Walth in WWeek:

“We concluded that there was not a valid conference to justify PSU’s reimbursement of Mr. Button’s European trip,” the audit says. “While Mr. Burton may have attended one to two business meetings, he was unable to account for the majority of the trip itinerary.” …

… The auditors also said emails sent by Burton show he set up the trip in part to visit family in Europe. Auditors found that Burton wrote to an official in Europe to say he was looking for a conference he could attend to help justify his trip. According to the audit, Burton wrote, “My stepdaughter lives in Surrey and her 50th birthday is coming up in September and I’m looking for an excuse to visit.”

… He said he did attend meetings in England and one day of a conference in France. He said he spent three days in Paris ill in bed at his hotel.

Bummer, except he’s probably lying about that too. Audit report here. The only other case I’ve heard of where an administrator had to pay back an Oregon university was our own Dave Frohnmayer. Both he and Burton – also a former state legislator with some political pull – were allowed to leave gracefully.

I hope Governor Kitzhaber does the same with Chancellor Pernsteiner, and quick. With or without the grace. And yes, I’ve got a PR request in for more expense reports, so keep that single malt coming.

6/5/2009: UO’s Under-represented Minority Recruitment Plan or UMRP gives $90,000 to departments that hire faculty who self-report as racial or ethnic minorities. What do those faculty spend this money on? Here is a link to the accounting statement for one history professor’s UMRP account. He took $62,000 as supplemental summer salary, and spent the rest on things ranging from moving expenses to research support to dining at the Excelsior. We hear most new history professors are lucky to get $6,000 in summer pay.

Affirmative action law (in our view appropriately) allows employers to make certain specific extra efforts to recruit minorities – but it is completely illegal to use race, ethnicity, or gender when determining pay, benefits, or working conditions. OK, the UMRP is illegal – but is it effective? Well, the professor in question (who has given permission to make his accounting statement public) left UO for another job the same year he spent the last of his $90,000. (A reader has told us this professor left because UO wouldn’t give his partner – who may also have been paid out of this $90K – a permanent job.)

In 2006 UO Provost John Moseley retired and was given a 1/2 time $124,000 a year sinecure as Director of UO’s Bend Programs. He wanted this because it allowed him to pad his PERS account and because he has a vacation home on the Deschutes. It turns out he’s been billing UO for his trips there – as these UO mileage reimbursements show. One reader pointed out that “Between June and Sept 08 JTM racked up $4441.75 reimbursable dollars for mileage, at about 50 cents per mile that’s 8800 miles. It’s about 125 miles one way from JTM (Eugene) to JTM (Bend) so that’s about 35 round trips in a 4 month period or 9 round trips a month.”

In the summer? Does UO-Bend even offer summer courses? Any OSU-Cascades meetings that Moseley actually attended? 9 per month? UO-Bend graduates 15 students a year. Moseley’s travel expenses alone are over $500 per graduate. Add in his salary and benefits and this one part of the administrative costs for Bend are already well over $10,000 per graduate. And Provost Bean claims this program is “in the black?”

From a UO administrator’s email:

Finally, there is a lot about the Bend campus that just does not “feel right”. For example, while no one really wants to put (too fine) a point on it, the fact that John Mosley is collecting a six figure salary while being retired in Bend (even if it is legit) does not look right and perceptions are important – particularly in economic hard times when you are asking faculty to give back.

Here is the 7/7/04 retirement contract signed by President Frohnmayer and Provost Moseley. It’s hard to read this without seeing it as an attempt to make an end run around the PERS rules so that Moseley can retire under the more generous pre-2005 contract – while still actually working for UO essentially full time and collecting full time pay.