December’s Notices of the American Mathematical Society contains a surprising column on Page 4, given that mathematicians have not been on the front lines of debates about diversity and campus speech.

The column, by Abigail Thompson, chair of math at the University of California, Davis, and one of the society’s vice presidents, says that today’s diversity statements are like the political litmus tests of the McCarthy era.

“In 1950 the Regents of the University of California required all UC faculty to sign a statement asserting that ‘I am not a member of, nor do I support any party or organization that believes in, advocates, or teaches the overthrow of the United States Government, by force or by any illegal or unconstitutional means, that I am not a member of the Communist Party,’” Thompson says. Those who refused to sign were fired. [Full disclosure: My Dad had to sign one of these – apparently helping liberate North Africa, Sicily, and France was not enough proof of his loyalty.]

Now, “Faculty at universities across the country are facing an echo of the loyalty oath, a mandatory ‘Diversity Statement’ for job applicants.” The “professed purpose” of these statements is to identify candidates “who have the skills and experience to advance institutional diversity and equity goals,” Thompson wrote. But “in reality it’s a political test, and it’s a political test with teeth.” ..

UO requires these statements for hiring and promotion. Originally they were bargained for by the faculty union, as a way for women and minorities to get credit for the high service burdens they face. The administration quickly picked up on them as a way to increase their control of faculty hiring and promotion. The most blatant example is from AVP Melanie Muenzer’s “search advocates” initiative, which puts mandatory “thought partners” on faculty hiring committees, which starts off as if it’s about ensuring efforts are made to get diverse candidate pools on the basis of race and gender – something easy to agree with – but then goes on in a way that can be read as if it is about making sure that new hires subscribe to particular beliefs, which of course reduces intellectual diversity:

This concern about is strengthened by the fact that the new instructions for Provost Phillips’s Institutional Hiring Plan warn that departments that lack collegiality are unlikely to be given lines for new hires.

So if your department has a lot of plainspoken faculty who vocally disagree on intellectual matters no new hires for you until you zip it and sign that loyalty oath.

No evidence of Senate involvement at https://provost.uoregon.edu/ay2020-21-institutional-hiring-plan

The provost expects each proposal to be developed based on institutional metrics (https://provost.uoregon.edu/institutional-metrics), including operational metrics, graduate and undergraduate metrics, and scholarship and excellence (“mission”) metrics as defined by the relevant unit. The Office of the Provost and the IHP advisory groups use these metrics during the proposal review process.

Units are expected to include field availability estimates in their proposals. Provided by Human Resources and Institutional Research (https://ir.uoregon.edu/FAE), field availability estimates give domestic context for the terminal degree field in which a unit is searching. Units may also reference additional data sources within the discipline (e.g., data on international applicant pools, data on postdocs) and what they already know about availability in the field (e.g., insights on graduates who seek positions in academia vs industry).

And of course there will be diversity, as defined by the the administration’s well-paid diversity professionals:

** Diversity Portfolio Analysis of the draft IHP will be conducted by a subset of the Active Recruitment Team, including faculty representatives and representatives from the Office of the Provost and the Division of Equity and Inclusion.

Consider the following when developing proposals: 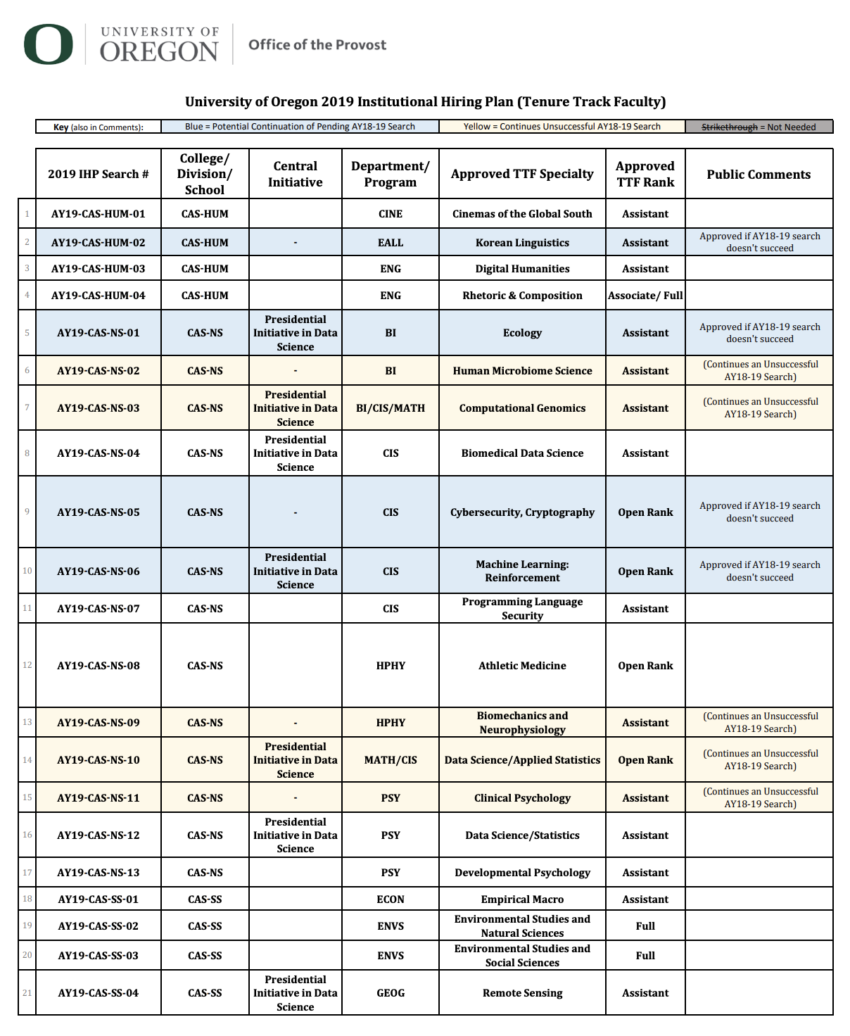 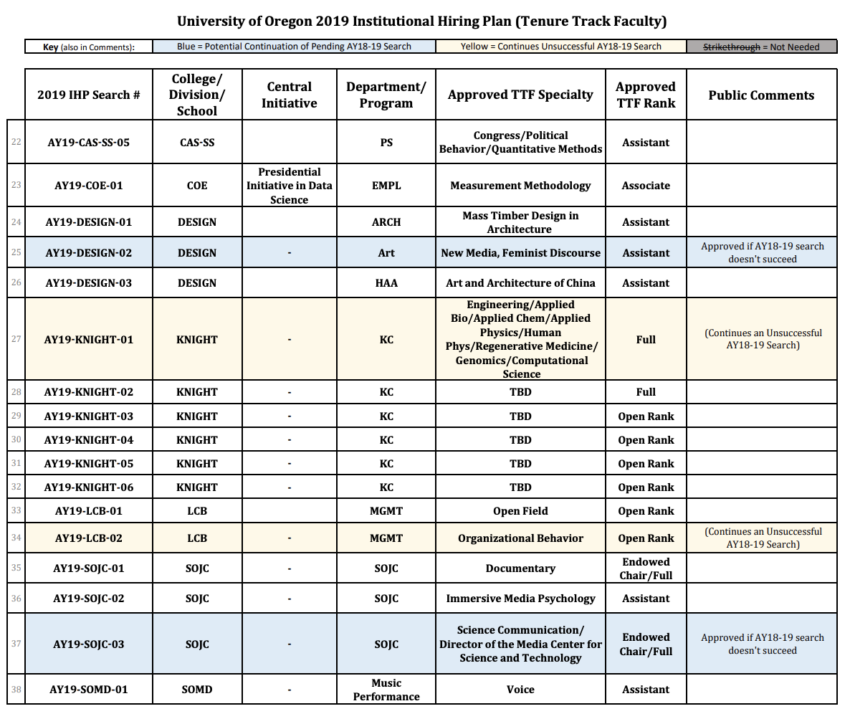 Page down for the 2017-18 plan. I’ll be interested in hearing Provost Banavar’s explanation of how Brad Shelton’s metrics drove the decision to give so many slots to the LCB and law school, at the Senate next Wednesday. 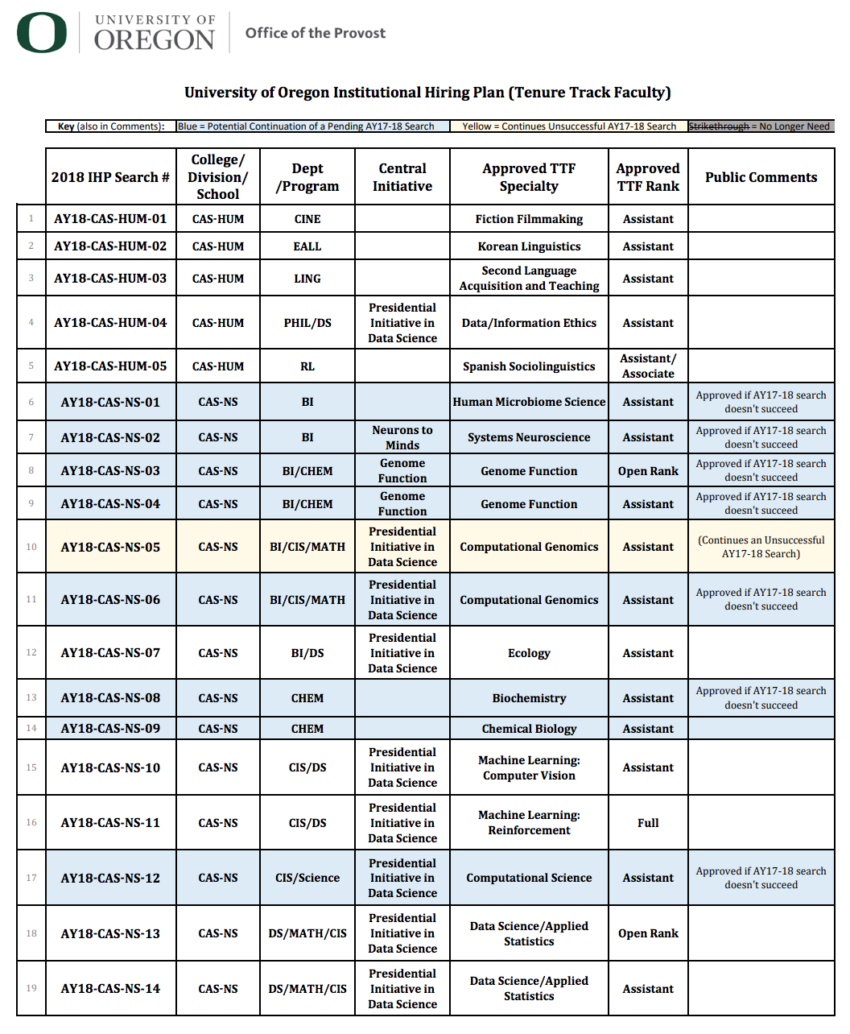 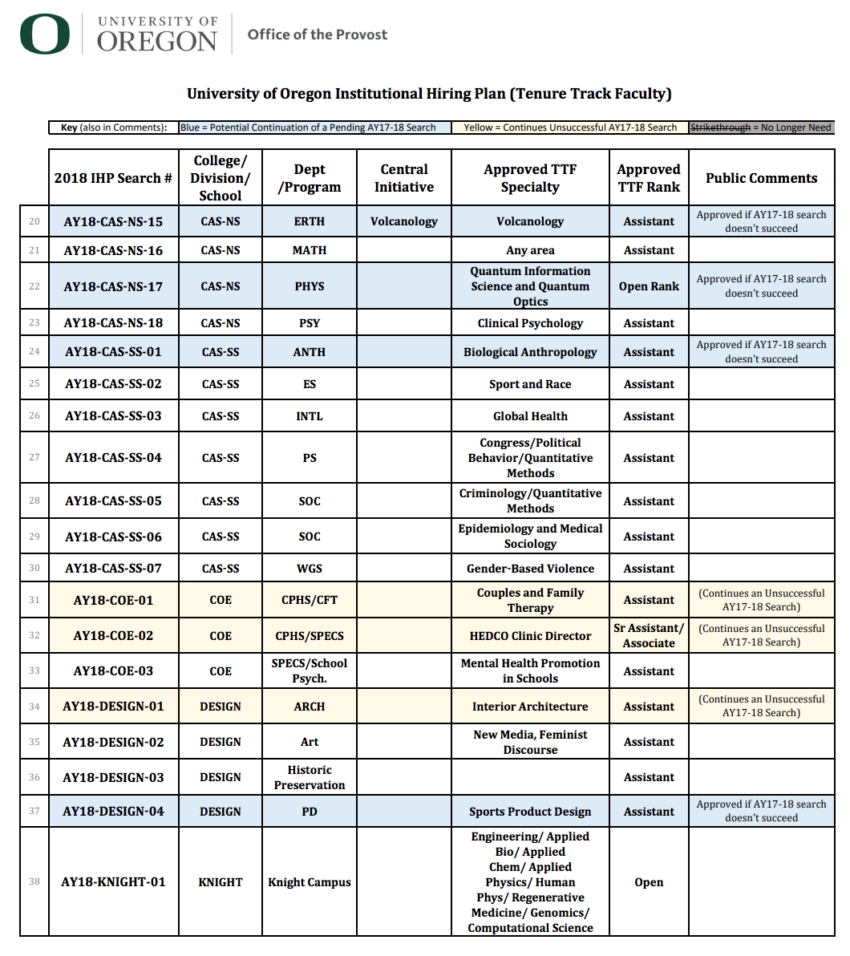 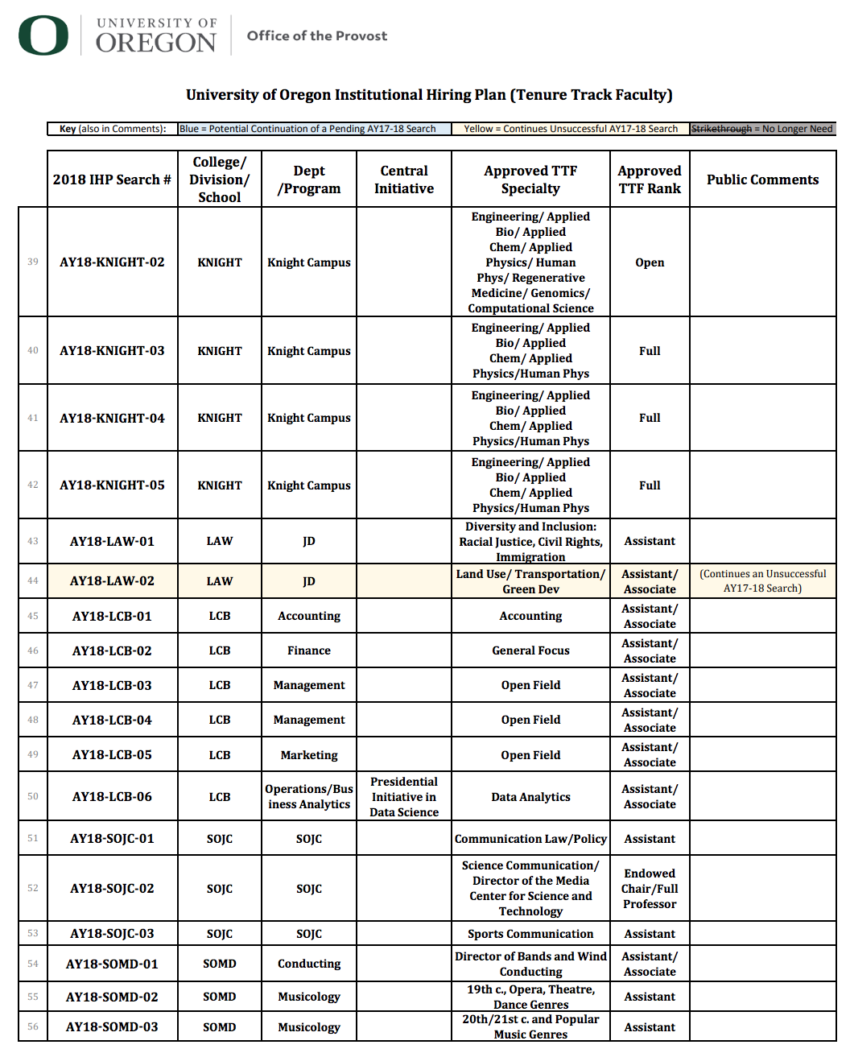 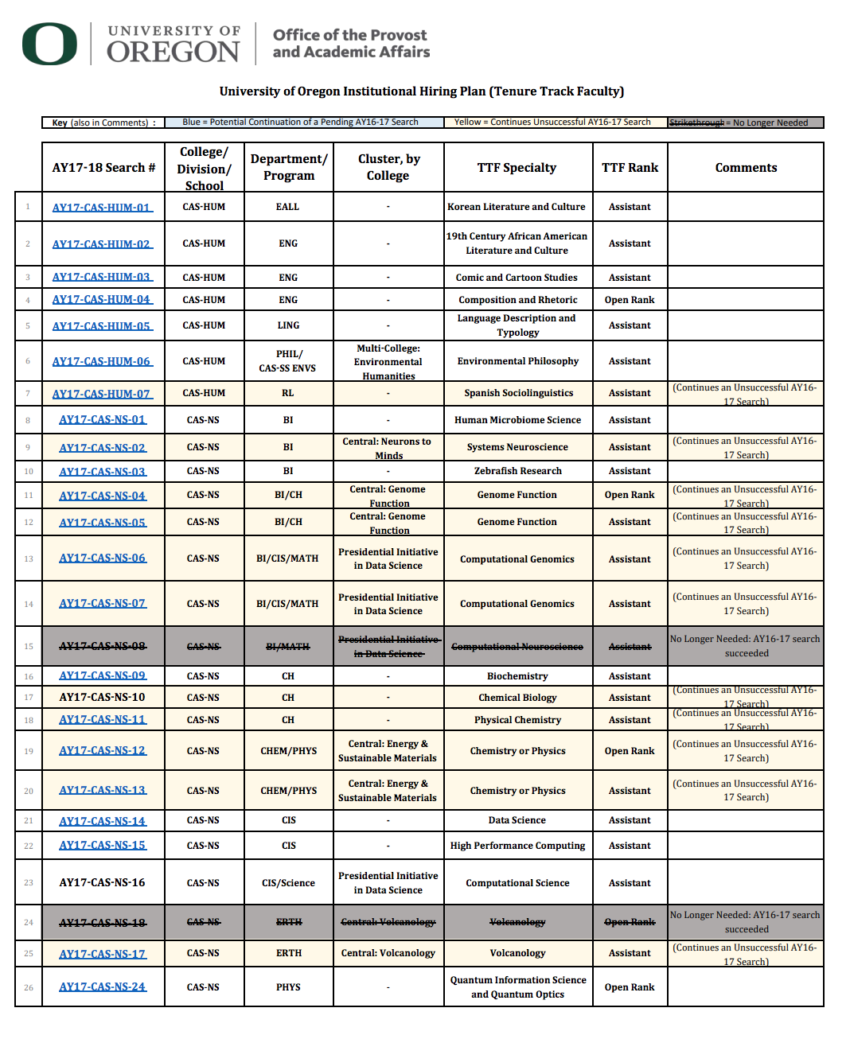 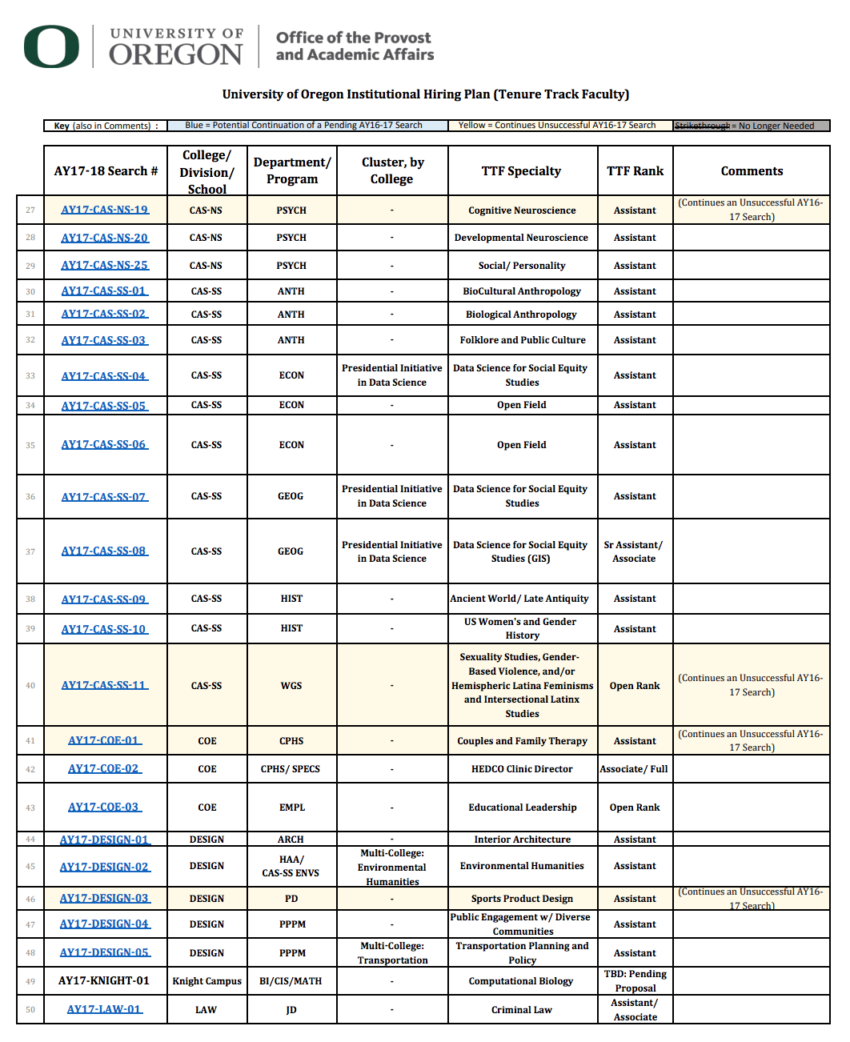 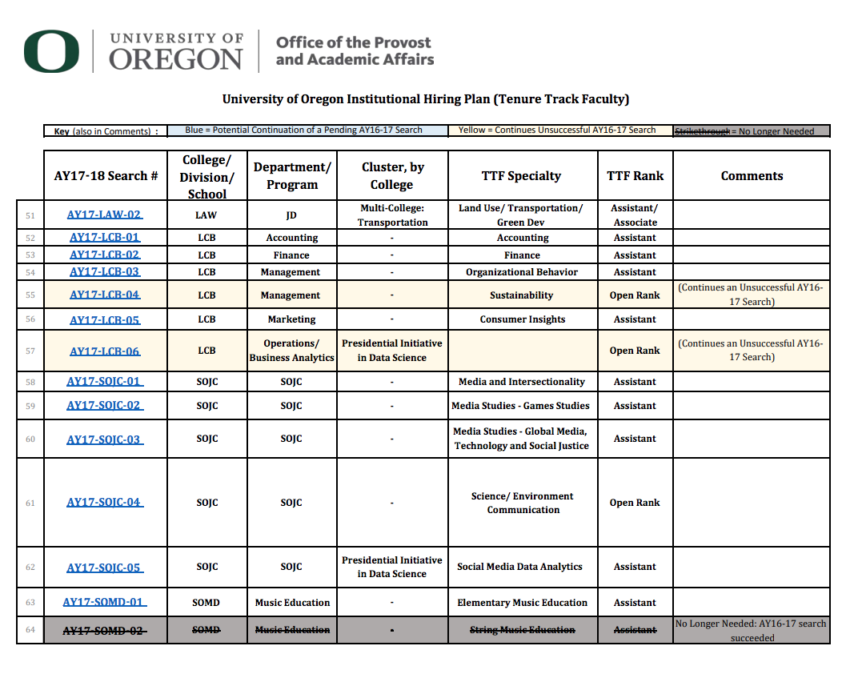 Thanks to the Emerald for sharing this with UOM.

So far as I am aware previous UO administrations have never been willing to share this sort of information with the Senate – but maybe that will change, and the day will come when shared governance will no longer have to rely on the kindness and curiosity of UO’s student journalists, or the whims of Jim Bean’s 4.25 big ideas and their ilk.

Or maybe the PRO is just trying to clear up their backlog before Oregon’s new PR laws make them improve their response times. 207 pages worth with some light and appropriate redactions, and all provided to the Emerald by UO at no charge – remarkable.

You can find the Provost’s Institutional Hiring Plan, i.e. the outcome of these proposals, here.

I haven’t had time to read through these, I’m hoping others will and leave comments. Page 1: 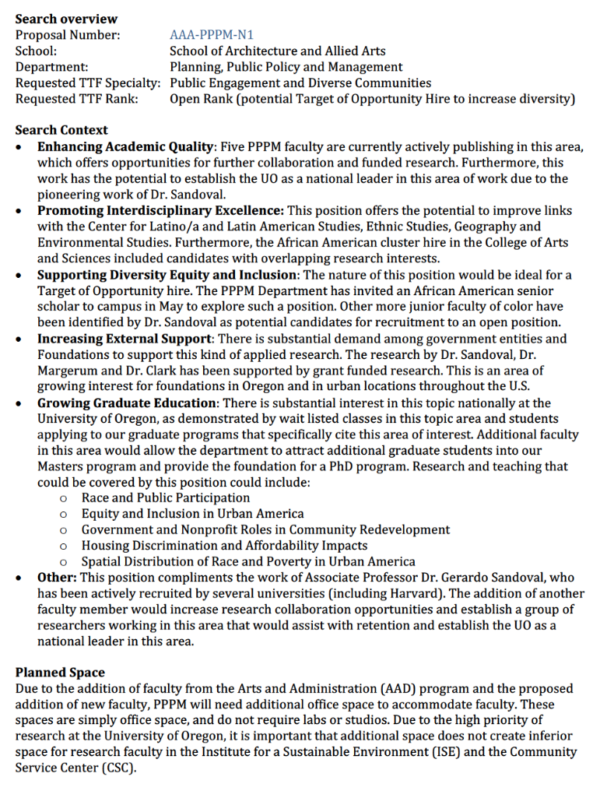