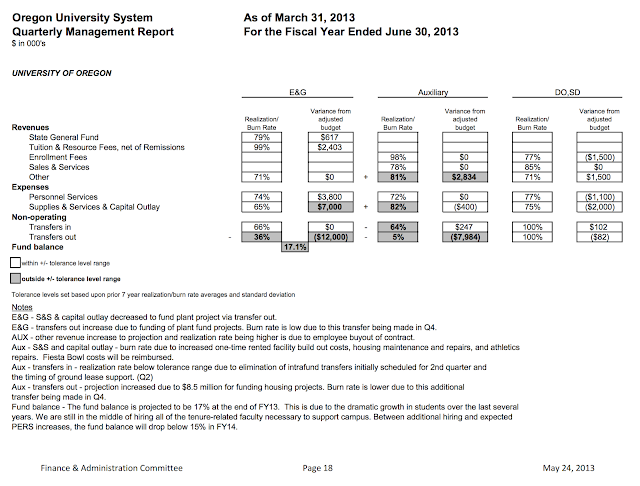 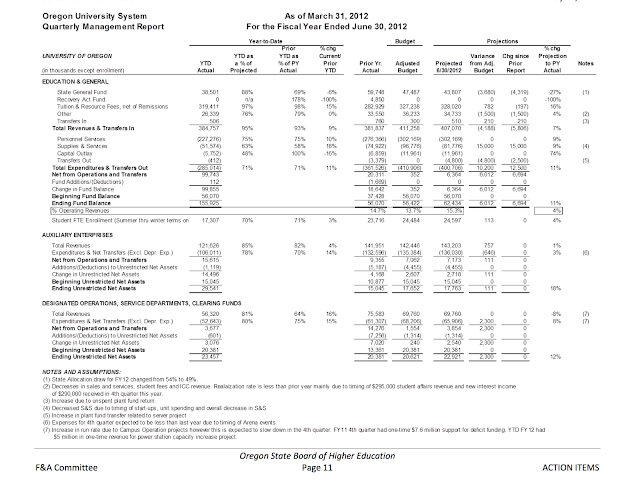 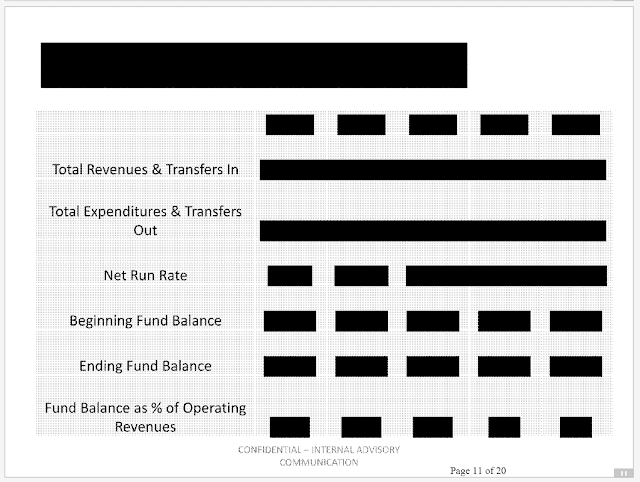 9/10/2010: VP for Budget and Planning Brad Shelton has a new website for his new Budget Model. http://budgetmodel.uoregon.edu. We just got the news, but it looks like another big step forward for transparency at UO. I particularly like the no bullshit FAQ. Example:

Why would you use a budget system that clearly does not adequately support graduate education?

It is a simple reality that most graduate student education is expensive and must be subsidized from other sources. No budget model can be held responsible for this fact. The Oregon Budget Model represents the reality of graduate funding as accurately as possible so that each Responsibility Unit within the University can formulate its own principles and strategies on how best to subsidize graduate education. Additionally, under the OBM the tuition remissions of all administrative Graduate Teaching Fellows will be fully funded by the central administration. This represents a direct central investment in graduate education of over 2 million dollars per year.

5/15/2010: Two news reports about Pres Lariviere’s reform plan. Ted Sickinger of the Oregonian’s story could not be much more negative, ending on this note:

“I am interested in ideas to create stable funding for higher education, but I am skeptical of using long-term debt to cover operating expenses,” Wheeler said Friday. “Debt is more appropriate for funding capital projects.”

Greg Bolt in the RG focuses on the political aspects:

And, as challenging as the financing side of the proposal is, it is the governance issues that could prove the hardest sell in Salem. The plan takes away both the Legislature’s ability to control the university by holding the purse strings and its direct authority over tuition and most other aspects of university management, giving that instead to an appointed board of trustees.

Legislators have never shown much appetite for surrendering those powers. For at least the past five legislative sessions, the Oregon University System has proposed major changes in its relationship with the state that were less comprehensive than what is in the UO’s current proposal, and few ever were approved.

Well this has certainly succeeded in making everyone’s agenda clear – we’ll see what happens next.  The white paper is at the official UO website here, there are a few comments there already.

5/12/2010: President Lariviere sends this to the faculty yesterday: “I am writing to share the University of Oregon’s white paper, “Preserving Our Public Mission Through a New Partnership with the State.” Bill Graves of the Oregonian has a good story on the proposal and reactions to the proposal. I took a quick peek, the plan is for a constitutional amendment that would:

a) Ask the state to underwrite an $800 million bond sale to add to the UO endowment (matched by private donations.) The state pays off the bonds from tax revenue, UO gets the investment earnings instead of the tax revenue as currently. This is a bet that in the future the state legislature will be even less supportive of UO than currently (or even more broke.) Not big stakes though, the earnings will be a small portion of the UO budget.

b) Take UO oversight authority away from the OUS system wide Board, replacing it with a UO Board of Directors. One non-voting faculty representative. Not clear how much of our theoretical faculty governance role we will lose, or how much of the theoretical protection we get via state laws and regulations. This is a bet that future governors will occasionally appoint wise and honest people to this powerful board, and not just use it as a political payoff. Huge stakes. It could be pretty good, it could destroy UO. Kulongoski’s record on this is horrible. In other states it has been mixed to bad.

Michael Redding put this proposal together. It is very detailed. This is a serious and innovative proposal. It is clear there is a lot of skepticism in the legislature. Chancellor Pernsteiner and OUS Board President Paul Kelly have the predictable reactions. This is round one in a long fight.

Any chance it will work? Well, see this link on what those ignorant, anti-science, anti-tax Texans did in response to a referendum proposal to raise taxes to support those pointy headed liberal professors in Austin. Too lazy to click? OK, I’ll tell you – they voted for it. The catch was the professors had to say what they would do in return for the money.

Personally, given how much tax and tuition money UO is currently wasting on people like Frohnmayer, Moseley, Martinez, Dyke, Daugherty and their ilk, I’d like more reform before this goes much further. $245,700 to Frohnmayer for teaching 47 students, 1/2 time? $220,000 to Martinez for pushing paper? $125,000 to Moseley for fishing in Bend? $120,000 to Davis for proctoring exams in Hawaii? This is bullshit and it makes us all look bad for putting up with it.

Obviously there will be a long debate about this proposal over the coming months, my hope is that Lariviere continues to sweep out Johnson hall in the meantime. It would make this proposal much more credible.

1/15/2010: This David Steves RG story is the most honest I’ve seen yet on what’s going on with state spending:

Question: What’s really going on with the state budget? One side says politicians in Salem behind the tax increase just increased state spending by $4.7 billion. The other side says the budget was cut by $2 billion. Who is right?

That’s not a $2 billion cut, you say? That’s right. The $2 billion figure cited by Democratic leaders is the difference between the $14.2 billion in approved spending and the $16.2 billion estimate of what it would have cost to keep up with growing case­loads, enrollment, medical inflation and previously approved government expansions.

Question: Why did the state’s general-fund budget get smaller when its overall spending increased?

Answer: Let’s look at the general-fund budget. Income taxes from households and corporations, plus lottery money, make up nearly all the general fund. The recession hammered those tax collections.

More than 130,000 Oregonians lost their jobs and investment income and corporate profits tanked. The amount of corporate and personal income tax revenue lawmakers could count on when they crafted the 2009-11 budget had fallen by $1.4 billion from what had been expected two years earlier.

Now, let’s consider the state’s all-funds budget. The general fund makes up just under a quarter of it. The rest comes from taxes and fees outside the general fund, as well as federal dollars.

The Legislature’s $733 million in higher taxes for the general fund through measures 66 and 67 are front and center now. But the state raised other revenue that doesn’t flow into the general fund, thereby boosting the all-funds budget. For example, the state increased the gas tax and DMV fees — a $568 million jump — for highway and bridge work. Plus, the state imposed $500 million in new taxes on hospitals and insurance premiums to increase health care for poor families.

In addition are hundreds of millions of dollars of fees, such as university tuition, that the state raised to offset dwindling income-tax revenues.

Apparently Brad Shelton, Kelly Wolf and Laura Hubbard are the people to thank for this big step forward for financial transparency.

12/21/2007: Oregon State economist William Jaeger has produced an interesting report on Oregon’s taxes, demonstrating that they are well below the national average. Is this a good thing or a bad thing? Also interesting is this study on happiness by state (of residence, not of mind). Oregon is #30.

12/7/2009: Interesting op-ed from insidehighered.com on the UC systems troubles. The claim is that the universities are exaggerating the extent of the problem:

Even with the revelation that many of the top earners are administrators and that there are now more administrators in the UC system than faculty members, many tenured professors have sided with the administration because it is much easier to attack the state for all of the UC’s problems. By blaming the state and the anti-tax Republicans, there is a clear enemy and an easy narrative. Moreover, by placing the onus of responsibility on the state, the university does not have to look at its own internal problems.

Sound familiar? It’s worth a read. The author is a UC faculty member and union leader.

What was supposed to be a one-time surcharge tacked onto last spring term’s tuition has now become a permanent increase to University tuition, and it’s costing students more than they bargained for. The surcharge, $150 for residents and $350 for non-residents, was approved by the State Board of Higher Education as a one-time emergency measure in March, but this fall the University requested the surcharge be made a permanent part of the tuition base, which the Board approved. “We were granted permission to keep the increase and add additionally onto it,” University Vice President of Finance and Administration Frances Dyke said. …

Student leaders, who were sold on the surcharge as a one-time occurrence, as well as a buy-down of the student incidental fee to offset the charge, are unhappy with the news. “This information was communicated in a way that didn’t seem to meet the goals of transparency that the administration says it holds,” ASUO President Emma Kallaway said. “Bottom line: We’re frustrated and seeking more information to better serve students.”

Good luck with that transparency thing.

Red flag goes up at OHSU

The new chief financial officer at OHSU has quit after just two weeks on the job. Apparently it has something to do with family issues, but given all the turnover in management on Pill Hill lately, the situation bears scrutiny. As Muddy Waters used to say, “that’s the stuff you gotta watch.” The most recent interim CFO can’t come back under PERS rules; he’s been gone for a couple of months already.

The announcement came on a Friday, no doubt timed so that it could be lost in the weekend, and of course the O‘s editors were sure to oblige on that score. We’ll come back to it on Monday.

How will these problems at OHSU affect Lariviere’s efforts to get the same independence from the legislature that OHSU has?