4/28/2011:  You can make quite a bit of money in academia, as long as your job does not involve teaching students or doing research.

The latest administrative raise tops that, by far. Retiring Alumni Director Dan Rodriguez was paid $100,989.  The new director, Tim Clevenger, will get $170,000.

But the big payoff is getting a job with the UO Foundation. The Oregon Attorney General’s office has given us their most recent filings. They are for the fiscal year ending in June, 2009. Why so old? Because our foundation runs out the IRS extensions, to delay having to reveal how much they are paying their executives. The numbers for 2008-2009 are here:

Karen Kreft was a former CEO who left under mysterious circumstances – looks they paid her a year’s severance. And Jay Namyet, the interim CEO, got over $300,000 in total compensation. The new CEO is Paul Weinhold. Any bets on what he is earning? They have to release that by May 15, and we will post it. 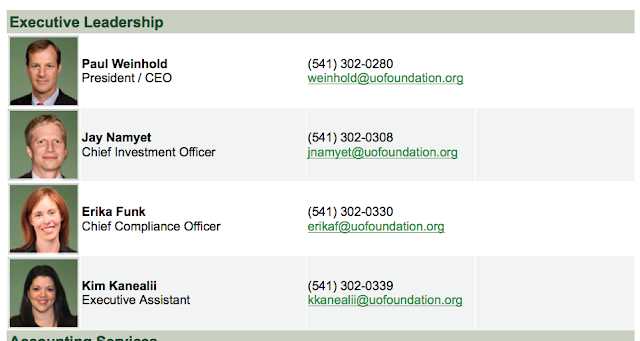 So what do these people do to earn this sort of money? They hire consultants to do the work: