The RG has the story here. More in the EW here, explaining that the city forester wants to ensure the replacements are more diverse than the current east-coast elite elm monoculture.

No confirmation yet to rumors that the Faculty Advisory Committee will vote to name the new phallus “Slusher’s Schlong”, now that the Bowerman family has declined UO Foundation Pres Paul Weinhold’s offer to call it “The Bowerman Blunt”.

I urge helpful readers to submit alternative names in the comments. I’ll then host a poll, and the creator of the winning proposal will be awarded some appropriately designed University of Nike© paraphernalia. 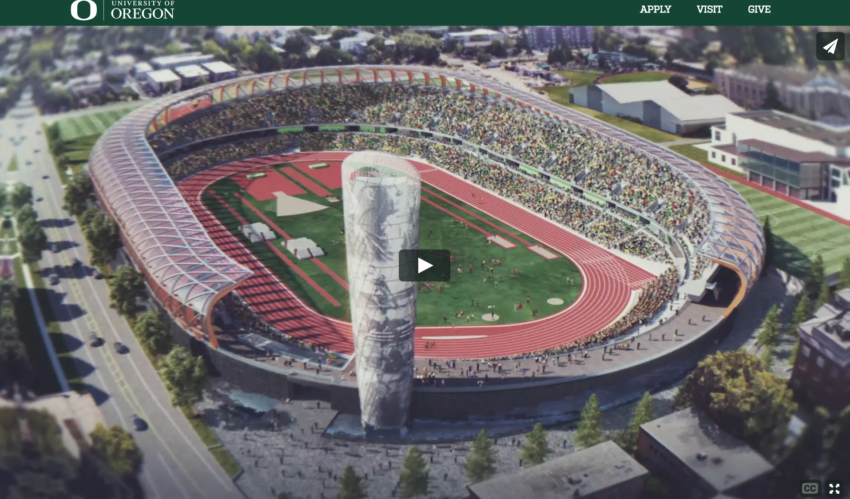 I’m still not sure why the UO Foundation didn’t just hire the kids who burnt down Civic. Maybe former Chief Compliance Office Erika Funk – already mostly erased from their website – raised some objections. In any case the city has  accepted the demo permit as ready to review, here: 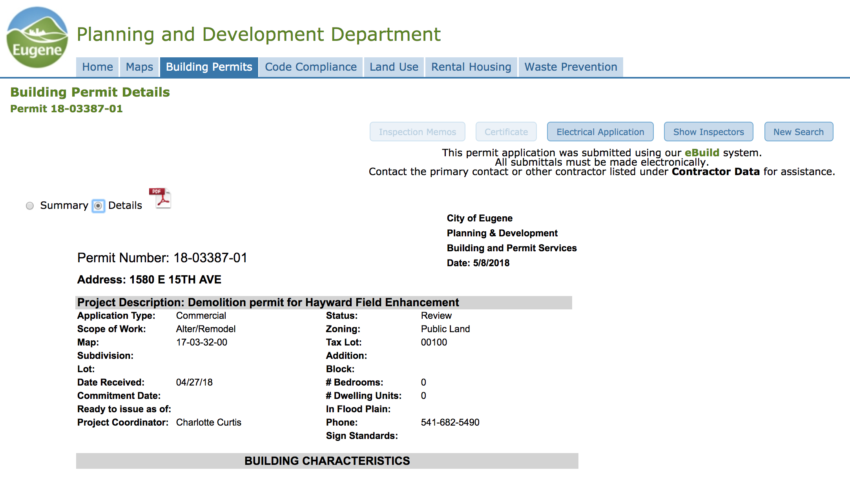 Ken Goe of the Oregonian has an interesting piece on the arguments the teardown supporters are trying to get traction with, here:

“Hayward Field is a special place, but let’s not get too precious about a stadium. We need to ask ourselves, which history exactly are we clinging so tightly to? If we’re being honest, it’s primarily a history of white distance-runner dudes, a single story of track and field anchored by [Steve] Prefontaine and Bowerman—characters who can do no wrong after death, who only get larger with time and marketing dollars.”

Just in case any UO students, faculty, community members, the UO Senate, ASUO, the Eugene City Council, the Mayor, the Campus Planning Committee, or most longtime Eugene track and field fans had any illusions about what JH and the UO Foundation think of their importance.

… The demolition of Hayward Field’s East Grandstand was proposed to make room for a new stadium to house the 2021 World Outdoor Track and Field Championships — the same event under investigation by the Department of Justice for possible racketeering, money laundering and fraud charges, according to The New York Times.

There has been no update on the investigation since late January, when the NYT reported that the International Association of Athletics Federations (IAAF) had been of particular interest to the Department of Justice after awarding the championships to Eugene with no bidding process. …

The new design was made public last week for the first time. It includes a nine-story tower on the track’s northeast corner, planned in honor of longtime UO track coach and Nike co-founder Bill Bowerman.

The council heard from a parade of people opposing the plan, among them Bob Penny; his brother, Bill; Neta Prefontaine, sister of distance legend Steve Prefontaine; former University of Oregon runner and author Kenny Moore, and Peter Thompson, a retired senior manager of the IAAF, the governing body of international track and field.

…”Bill Bowerman would cringe at the height and shape of his honorary tower.

Neta Prefontaine said she spoke before the council with a heavy heart. “I feel like I’m losing my best friend,” she said.

4/23/2018: Live feed here. Vin Lananna’s Track Town enterprise has hit up the council for lots of public cash. We’ll see if that translates into public input. 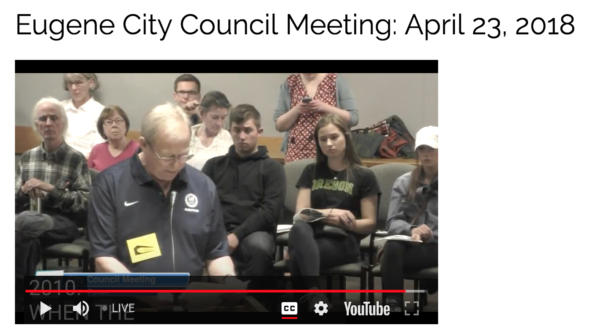