Links to legal and consulting expenditures and the Hershner Hunter contract below – but not Amanda Walkup’s charge for investigating LibraryGate, which Doug Park apparently didn’t put in writing.

Dave Hubin’s public records office is the black hole of transparency and trust. They sat on this 5 minute request for 2 weeks. If you want action, email Coltrane’s Chief of Staff Greg Rikhoff (and cc his Interim General Counsel Doug Park, who knows he’s already on thin ice with public records.) 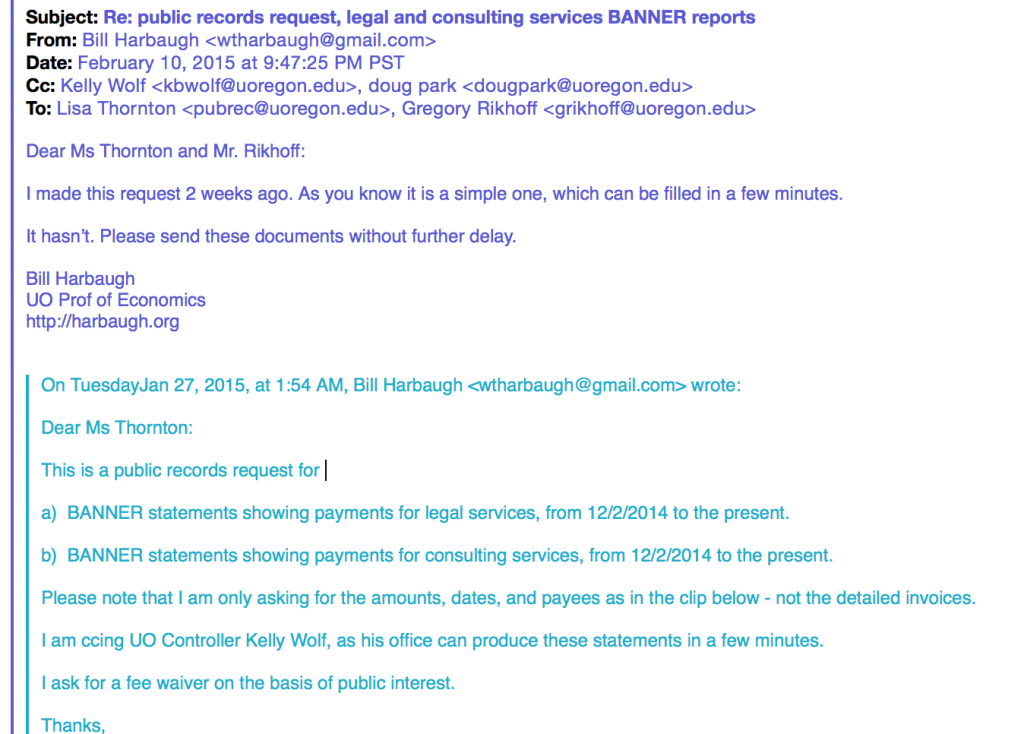 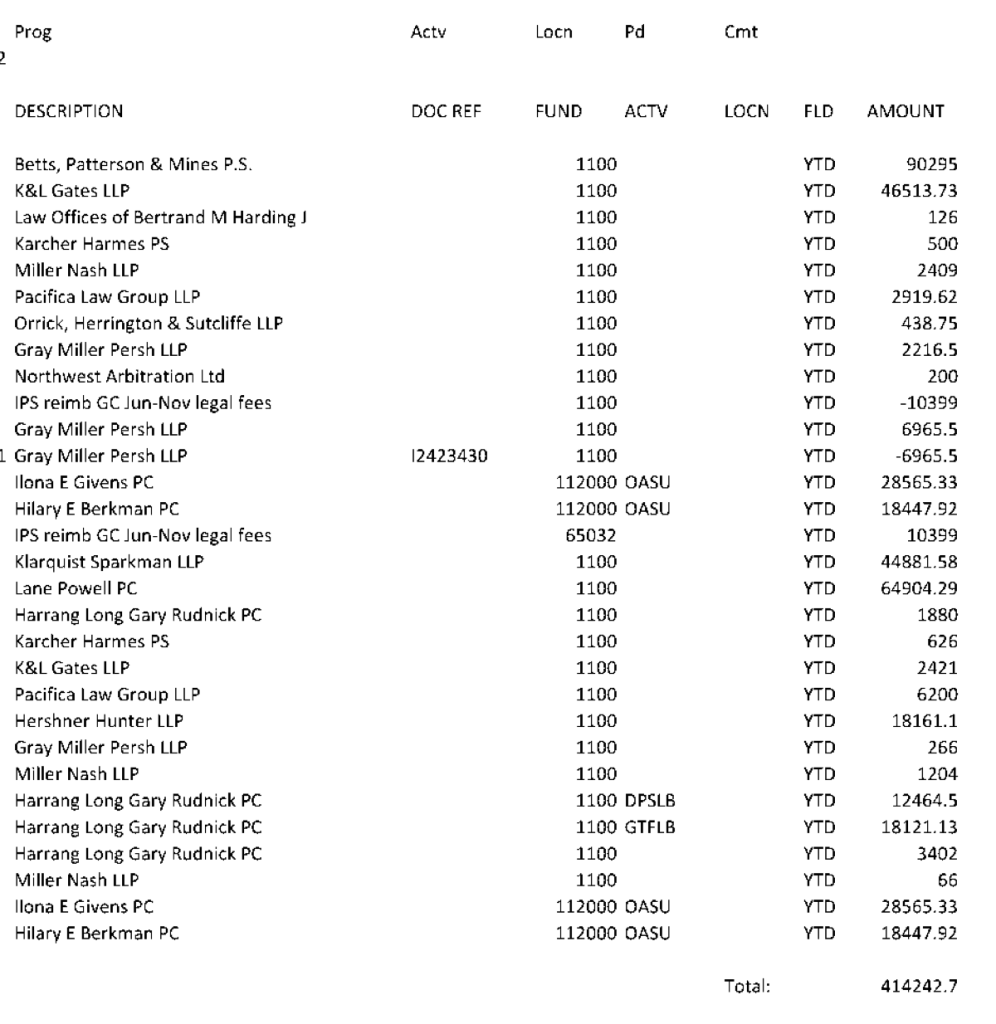 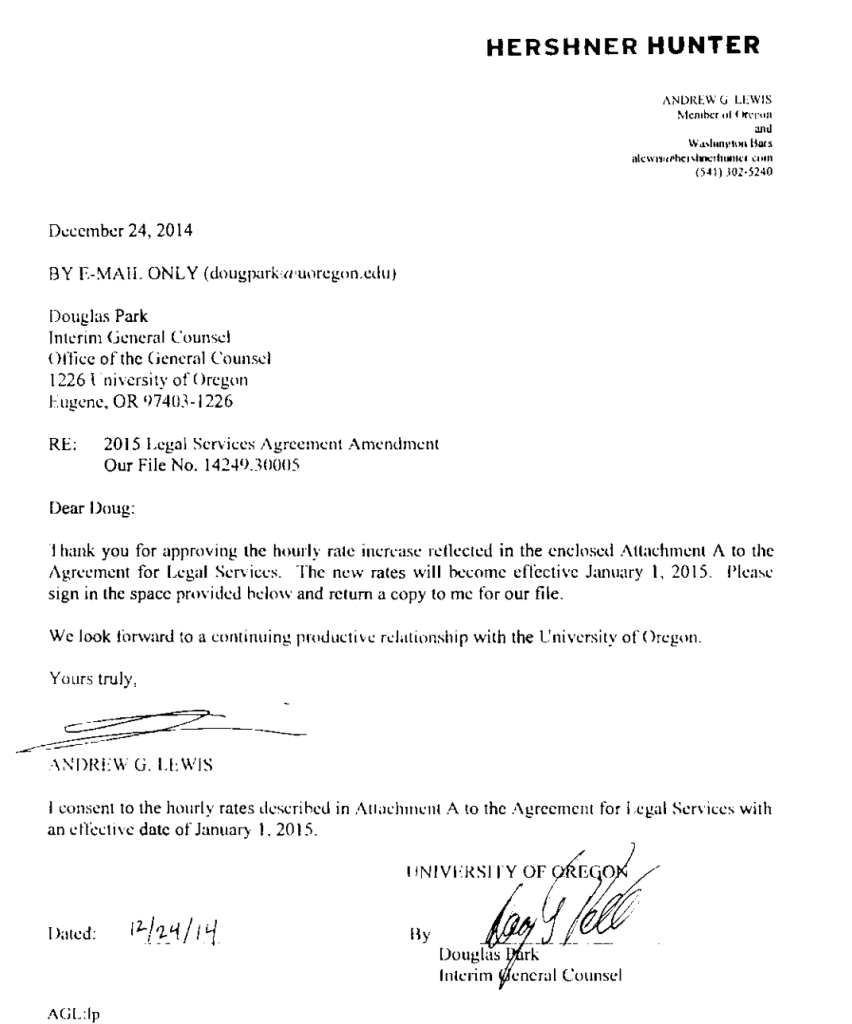 9/8/2014 update: This SF firm does anti-union work for employers and billed UO quite a bit during Berdahl and Gottfredson’s attempts to fight the faculty union. Lately they’ve turned to the presumably lucrative business of running workshops about sexual harassment and Title IX training, taught by, of all people, former UO GC Emerita Melinda Grier. A few months ago they even added Grier to the firm, as “Of Counsel”: 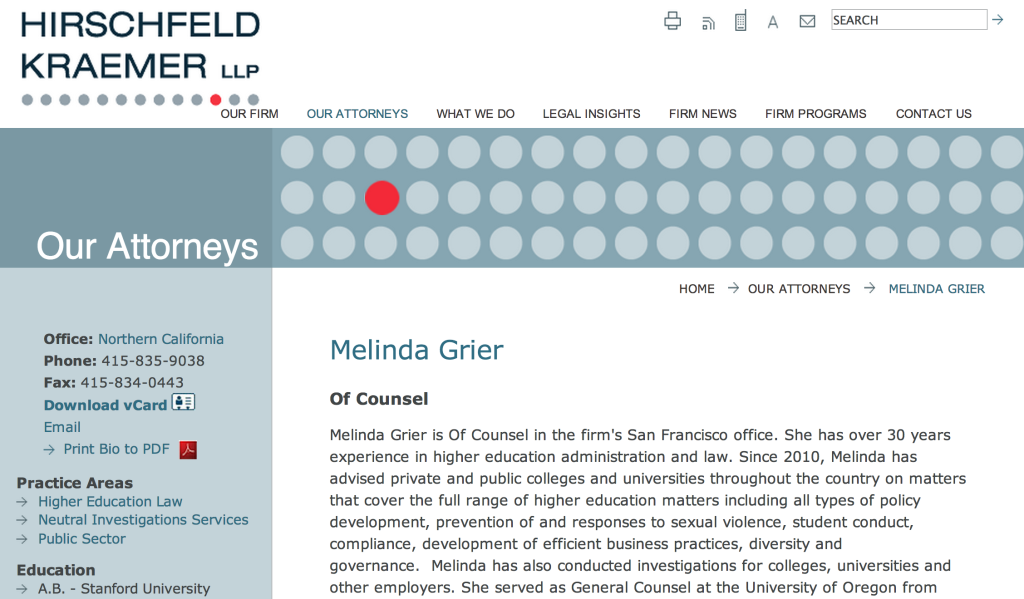 But now she’s been dropped. No word yet if they are still billing UO $25K or so a month: 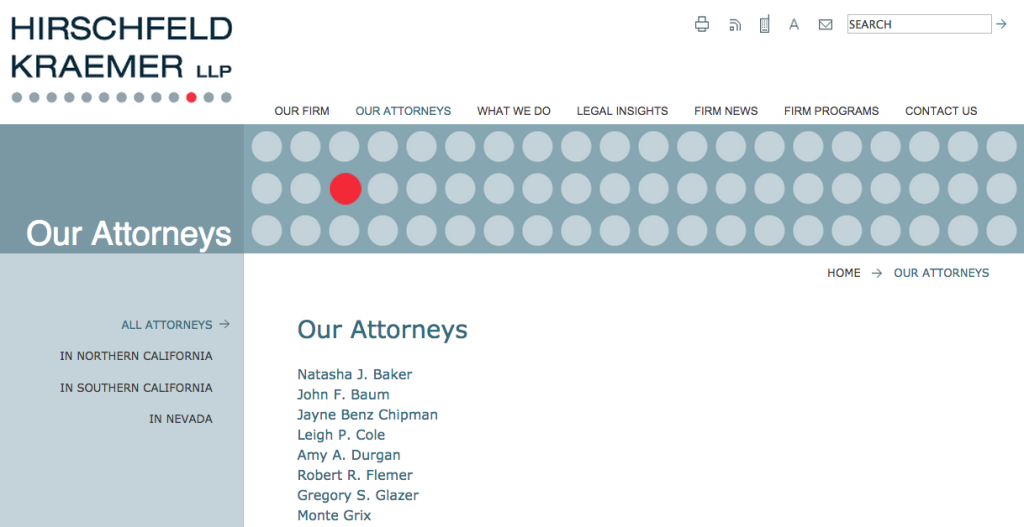 It looks like many other firms are getting some action from Randy Geller too. Here’s April and May, full dump here:

10/20/2011: It really didn’t end well last time, but one of them could easily end up advising UO on legal matters again – a side effect of SB 242, which puts part of UO’s legal services up for bid.

The RFP closed September 11. On 8/25 UO’s former General Counsel Melinda Grier set up a Higher Ed consulting firm. The office address, 440 E Broadway Ste 300 Eugene OR  97401, is the same as that for the Gaydos, Churnside, and Balthrop law firm. They even share a fax machine number, (541) 343-1599. And in September Gaydos et al submitted a proposal to handle UO’s legal work. I’ve been trying to get a copy of this proposal from UO’s public records Officer Liz Denecke for 6 weeks now. I wonder what could be taking so long.

Gaydos’s competition for the UO job includes a proposal from Dave Frohnmayer’s firm Harrang, Long, Gary and Rudnick, which Ms Denecke did provide – but only after a petition to Attorney General Kroger. They are quite happy to brag about Frohnmayer’s connections:

Dave Frohnmayer, Part-Time Of Counsel (15 years of government practice/Admitted
in Oregon 1971, OSB #710015). While Dave is not a full-time attorney with the firm, he is available for consultation on matters as UO-PSU-OSU-CO/OUS deems fit (and at your discretion). As you are well aware, Dave is not only a former Attorney General for the State of Oregon, but he also has extensive experience in higher education and with the UO in particular as a former President. As such, Dave has deep connections both in Oregon and internationally (particularly in Germany and the Pacific Rim). He also maintains connections with the Association of American Universities (AAU) and the Society of Attorneys General Emeritus (SAGE) and other groups within the legal community, which may be of benefit to UO-PSU-OSU-CO/OUS. Alternatively, UO-PSU-OSU-CO/OUS may request that Dave recuse himself from some or all matters, or that the firm create a firewall between him and some, or all, firm activities related to UO-PSU-OSU-CO/OUS

I wonder if the Gaydos firm’s proposal mentions Ms Grier? Meanwhile, who is running UO’s search for a firm? None other than Grier and Frohnmayer’s old assistant Randy Geller, appointed UO General Counsel by President Lariviere after the Belotti debacle concluded his boss, Melinda Grier, had provided UO with “deficient legal representation”.

9/5/2011: Seems like a good idea. Maybe Melinda Grier and Dave Frohnmayer will team up to bid for the contract:

Bidding closes Friday. Currently the DOJ handles litigation, but SB 242 will devolve that to OUS and the universities.

2/19/2010: I got an extensive anonymous post in the comments section this morning from a Paula Rogers supporter. I don’t have any inside knowledge about this case, but the general pattern of retaliation – for which the jury awarded damages – and counterproductive behavior by the UO General Counsel’s office described here sure rings some bells. Frohnmayer kept Melinda Grier on because she was willing to hide things for him, and he had a lot to hide. Here’s hoping Lariviere soon decides he’d rather have someone competent as his lawyer.

Anonymous said…
The recent jury verdict related to charges of race-ethnic discrimination at the UO simply confirms the patterns of retaliation and hostile employee relations that are documented throughout this blog. My understanding of the situation is that Professor Rogers reported wrong-doing, including illegal discrimination, to University authorities. She then experienced systematic retaliation, ending in the termination of her contract. This termination was exacted in a highly irregular fashion and contrary to the vote of both the midterm review committee (including both departmental and external members) and her department. Until reporting the illegal discrimination all reviews of her work had been exemplary. The retaliation was clearly spearheaded by those who were the focus of the reports of discriminatory behavior.

This pattern of discrimination and, especially, retaliation has been repeated numerous times throughout the University. When challenged, the University, using the Attorney General’s office, spends inordinate amounts of money fighting charges of discrimination. (For instance, the state has spent hundreds of thousands of dollars fighting this particular case and that is before payment of damages and legal costs to the plaintiff.) The administration also engages in extraordinary measures to harass those who dare to challenge them, with numerous and varied attempts to ruin reputations and financial standing of their challengers and their families and friends. Only a very few, brave people are ever able to withstand the onslaught and the deep – in fact virtually bottomless – pockets of the University and the state’s legal apparatus.

The UO’s approach to employees appears to involve fierce attacks on anyone who dares to question an administrative decision or to point out possible wrongdoing. One, now retired, administrator has been quoted as saying, “We’ll always fight as hard as we can against employees. Only a few people will have the energy to continue all the way against us. Even if we eventually lose a few cases, most people will be too scared to take it all the way, even if they have the law on their side. Thus we probably save money by playing hard ball.”

I’m not a lawyer, but I have been told that smart organizations approach employment relations in a manner exactly opposite to this. Smart organizations use employment lawyers to help them figure out how to conform to laws and regulations and obey employment related laws – not to harass and intimidate employees or to justify decisions and practices that are blatantly illegal. It is time that the UO entered the 21st century and began to do the same. They should reinstate Professor Rogers to her position and develop fair, non-discriminatory practices and procedures.