… And Brad Avakian, Oregon’s labor commissioner, assures me he is anxious to prosecute an equally egregious case here.

“If an intern comes to us and says, ‘I think I’m doing free work for my employer,’ we will investigate the case,” Avakian said Friday. “If they are there for the benefit of the employer, and not their educational experience, we will order the employer to pay them what they’re owed.

“I don’t have to go to a court … (or) the attorney general’s office. All the authority is invested in my position.”

Start with the football players: unpaid internships with brain damage.

6/10/2013: Architect of Kitzhaber’s education plan plans to leave. Nigel Jaquiss has the scoop in WWeek. Some search firm sure took us on this guy – I wonder if they also handled the Medgar Evers presidential search?

6/10/2013: Betsy Hammond reports that only 61% of Oregon HS grads go on to college, vs. national average of 68%.
6/7/2013: New work by Michael Greenstone and Adam Looney shows the returns to higher education are dramatically higher than stocks, or anything else, even for those who get some college but then drop out. This comes from a combination of higher wages and lower unemployment. (Watch out for the selection effect of course). Figure from the NYT: 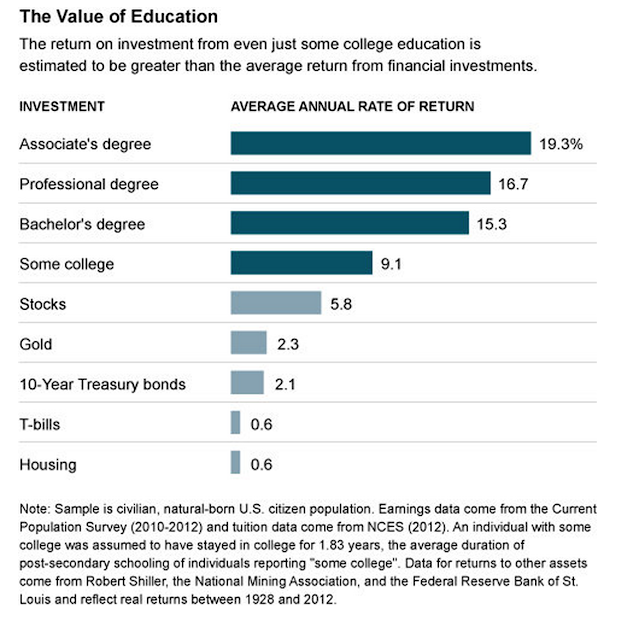 Update: And, rather amazingly, here’s a brand new story on America’s most famous dropout, and his recently discovered ability to do percentage calculations: 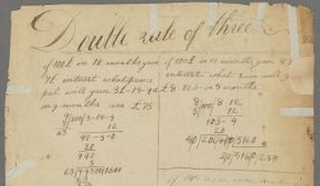 (The Dec and Jan spikes were apparently a bug in counting iphone hits.)

There is a bug in blogger polls and it keeps dropping responses. I’m deleting all the polls. I’ll find a replacement program, since I think polls are fun.

5/11/2013: We wouldn’t want to have the football players mingling with students at meals. Might give them the wrong idea about why they’re in college.

Motion to have the UO athletic department pay the costs of athlete only tutoring and the Knight Arena land, passed 19 to 4 with 4 abstentions on 5/8/2013.

President Gottfredson’s report to Senate due 7/8/2013.

Payments by the Athletics Department for Academic Purposes

1.1 WHEREAS in 2004, the UO Athletics Task Force, which included President Frohnmayer, Athletic Director Bill Moos, NCAA Faculty Athletics Representative Jim O’Fallon, the Senate President, and many Senate and faculty representatives, concluded a three-year study of UO athletics with a report that stated as recommendation #1,

“The Task Force and the Athletic Department recommend a voluntary financial contribution by athletics to the Presidential Scholarship fund.”[i]

1.2 AND, WHEREAS in 2008, the UO Senate passed a resolution titled “Revenue Sharing with the Athletic Department” which concluded,

“Be it moved that: The Athletic Department, Administration, and Faculty work together to outline a mechanism that, under the appropriate fiscal conditions, would allow the Athletic Department to provide a meaningful proportion of their yearly revenues to the general fund to aid the academic mission of the university.”[ii]

1.3 AND, WHEREAS nine years have now passed since the 2004 Task Force report, and 5 years since the 2008 Senate motion, during which annual operating expenditures by the athletic department have increased from less than $40 million to more than $90 million;[iii]

1.4 AND, WHEREAS the athletic department is still not making any direct financial contributions for the support of UO’s academic mission, beyond paying the tuition of its own students, and making a few small and intermittent donations to the library [since ended];

1.5 AND, WHEREAS UO’s academic side has been making a variety of new and increased payments in support of the athletic department, including since 2010 an estimated $1.8 million dollars per year for the tutoring services at the Jaqua Center for Student-Athletes that are available only to student-athletes;[iv]

1.7 AND, WHEREAS the athletic department solicits donations and ticket surcharges for the Duck Athletic Fund, totaling ~$30M for 2012-13,[vi] with the statement, “The mission of the Duck Athletic Fund is to raise funds to offset the expenses of student-athletic scholarships and related athletic department support at the University of Oregon.”[vii]

1.8 AND, WHEREAS in the most recently reported data, 2011-12, the athletic department paid only $7 million from these DAF funds to the academic side for student-athlete tuition.[viii]

2.1 BE IT HEREBY MOVED that the UO Senate requests that the UO President requires the UO Athletic Department to pay from its budget the full cost of providing tutoring and academic support for student-athletes, beginning in FY 2013-14;

2.2 BE IT FURTHER MOVED that the UO Senate requests that the UO President requires the UO Athletic Department to pay from its budget the full cost of the bonds used to purchase the Knight Arena land, beginning in FY 2013-14;

2.3 BE IT FURTHER MOVED that the UO Senate requests that the UO President requires that for each year beginning with FY 2014-15, the UO Athletics Department set aside from its budget a sum equal to 2% of the athletic department’s prior year spending on athletics, and redirect these funds toward UO’s academic purposes, including but not limited to scholarship and student support services for low-income Pathways Oregon students, and academic merit scholarships.

Support from Past Senate Presidents:

I write this in strong support of Prof. Harbaugh’s motion on athletics up for debate today in the Senate and apologize for not being at the meeting in person however I am out of town.

As a former IAC chair, IAC member for over 10 years, University Senate Representative to the Coalition of Intercollegiate Athletics (COIA; a national alliance of Division 1A faculty senates whose aim is to reform college athletics), and the University Senate President who co-established the 2001-04 Athletic Task Force, I have been aware for many years that the University Athletic Department has avoided following through with its promise to pay a fraction of its revenues to the President Scholarship Fund. This promise was made in the report from the 2001-04 Athletic Task Force Recommendation and agreed to by then Athletic Director Bill Moos and then University VP for Auxillaries Dan Williams who was representing the University President. The athletic department budget has grown in that time from ~$35 million to over $90 million yet there has been little attempt to fulfill the promise made to the Senate and to the University community. In a time when the University continues to maintain it has little or no funds for academic improvements such as faculty salaries or reducing class size and continues to raise student tuition and fees rate significantly each year, it is time to find new sources of funds to support academics, our primary mission. The current motion proposes several ways of achieving this goal without harming athletics. Please consider voting in favor of this motion.

“For a decade now the UO Athletic department has claimed to be financially independent and to not draw financial support from the University’s general funds. Those of us active in faculty governance realize, however, that accounting for the Athletic department’s $90,000,000 budget is complex and that such a claim to financial independence comes with many caveats, such as the expenses for student athlete academic tutoring, and the maintenance of the palatial Jaqua center.

“At the same time, the claim of financial independence has undergirded an assertion of management independence, whereby the athletic department operates without meaningful oversight by faculty governance. I witnessed this when I served on the Arena Financing sub-committee, and saw the Athletic department advertize revenue claims that were wildly overstated, demand tax-free bond financing backed by the University, and basically ignore well-informed faculty advice about the project, including revenue forecasts that have turned out to be very close to actual revenues from Matthew Knight Arena.

“The UO Athletic department, like those at other NCAA members, sorely needs a thorough reform that will empower the interests of athlete-students, from whose labor the spigots of revenue flow. A good first step is to make good on promises to support academic excellence and student success by funding scholarships for all needy students.

I enthusiastically support this motion.

It is in the interest of all parties that the Athletic Department dedicate a small stream of its profits to the academic enterprise. I recommend the support of presidential scholarships as a perfect means. Not only would the University benefit directly, but the Athletic Department could claim to have joined the small number of schools nationwide that help feed academics, rather than deplete them. In 2001 we brought the $2 million “subsidy” of the Athletic Department to an end; we have been waiting a long time for the other shoe to drop. 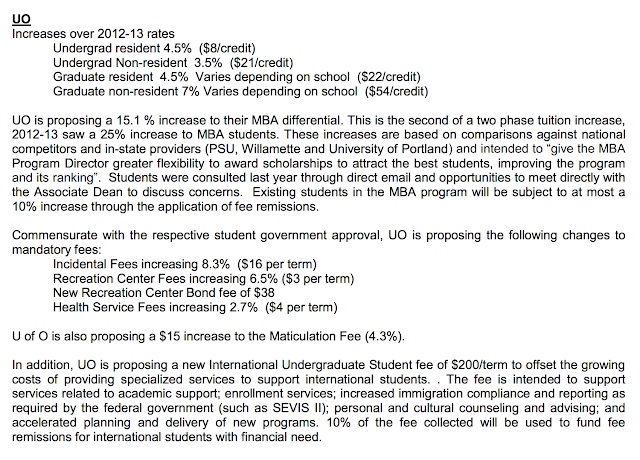 Call me old-fashioned. I thought it was a trifle déclassé for our athletic department to sell Duck women’s soccer shorts on the internet – complete with a certificate of authenticity. But it must have helped cover Kelly’s bonuses. Now they’re selling tickets to the cheerleader tryouts for $5: 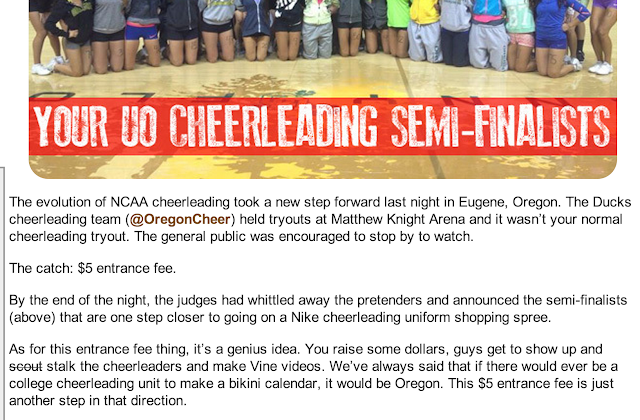 I guess this is safe for work? An anonymous reader sent me the link, with many photos. I didn’t believe them, because when you look at the GoDucks.com website for cheerleader tryouts, they promise a certain amount of discretion:

But that was back when Bill Moos was Athletic Director. Things have changed, and for AD Rob Mullens, money is money. The official Oregon Cheer twitter feed invites spectators to come down to Matt Court with their $5.

No verification yet to the rumor that senior JH administrators get in for free. 4/30/2013.

… The school had previously insisted it would continue to pursue acrobatics and tumbling despite the ruling. But on Friday, it backed away from that position.

“The court has ruled that acrobatics and tumbling is not in their view an approved NCAA sport for Title IX purposes, and as a result the university will have to review its status and continuation going forward,” Bushnell said in her statement. “The university currently sponsors only NCAA-approved intercollegiate sports and not club sports.”

The school is hosting the National Collegiate Athletics and Tumbling Association’s national championships this weekend.

The  Ducks won. Adding this at UO was part of Kilkenny’s budget-busting scheme to add mens baseball without breaking Title IX rules.

Oregon operates the second-most-expensive public preschools in the nation, at a cost of more than $8,500 per child for a half-day, Head Start-like program, according to a study released Sunday night. Partly because of the high costs, the state has to limit the number of children who take part to about 7,200, or about 7 percent of all 3- and 4-year-olds in the state. When judged by the rate of 4-year-olds who get state-paid preschool, Oregon ranks 30th among the 40 states that offer programs.